Yesterday I found something so amazingly ridiculous that at first I thought it was a joke.

Sadly, it is not.

I told some friends about it, and said, "This is so idiotic that I considered writing about it on Skeptophilia, but I honestly can't think of anything to say about it except 'What the fuck?'"

My friends did not concur.  If this didn't make the cut for the topic of a post, they said, there was something wrong with my selection criteria.

So I bowed to the pressure  And to my pals I say: I hope you're all satisfied with what you've done.

And that is why I am here today to tell you about:

Yes, I'm serious.  Worse still, this stuff is sold by Gwyneth Paltrow's undeservedly famous company "Goop," which peddles alt-med nonsense of all sorts, such as "Aromatic Irritability Treatment."  But even so... vampire repellent?

Let's hear what the website has to say about it:


A spray-able elixir we can all get behind, this protective mist uses a combination of gem healing and deeply aromatic therapeutic oils, reported to banish bad vibes (and shield you from the people who may be causing them). Fans spray generously around their heads to safeguard their auras.

Yes!  Spray it on your head to safeguard your aura!  Then you can squirt CheezWhiz up your nose to keep yourself from inhaling evil spirits!

The bottle tells you even more:

One of the many questions I have about this is: how the hell do you "sonically tune" a gem?  Do you carve little bits off it until it plays an A above middle C when you hit it with a hammer?  Then there's the issue of "gem elixirs," which you apparently make by soaking rocks in water in the hopes that their essential quantum frequency vibrations will be transferred to the water or something. 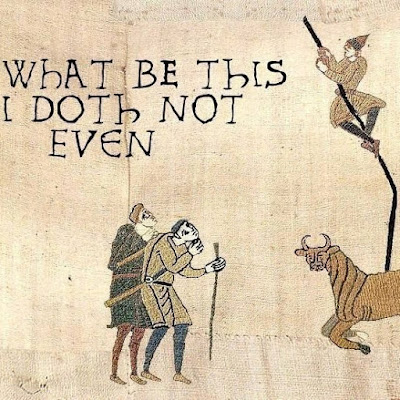 Of course, as one of my friends pointed out, there's no doubt that if you use it, you won't be troubled by vampires.  "I bet if I buy some and use it faithfully, no psychic vampires will come near me.  I BET," she said.  "I've been using my anti-alien candles and there've been no extraterrestrials keepin' me up at night, no sir."

And I can't argue with that.

Me, I think there's a whole untapped market out there.  If Gwyneth can become rich selling people spray to keep away beings that don't exist, there's no reason why I can't jump on the bandwagon.  I bet anti-Bengal-tiger spray would be a big seller here in upstate New York.  I can guarantee that it'd be 100% effective.  Unfortunately, we've already been beaten to the punch on the Bigfoot angle; just a couple of weeks ago a woman in North Carolina announced she was selling a spray called "Bigfoot Juice," although apparently the point here was not to keep Bigfoots away, it was to lure them in.  "Will attract any Sasquatch within a mile and a half radius!", the sales pitch states.

Why you would want to attract Sasquatches, I have no idea.

But even so, that still leaves a lot of possibilities.  My friend already has her anti-alien candles, so that one's out.  How about NoGhost Strips, for people who are sick of living in haunted houses?  Or CurseAway, if you think you're the victim of evil voodoo?  The possibilities are endless.

I don't see that Gwyneth has trademarked any of these, so I think we're good.  On the other hand, she already has "Moon Juice Sex Dust," which is "designed to ignite and excite sexual energy in and out of the bedroom," "Turn Back Time" age-reversal tonic, and "Chill Child Kid Calming Mist," which contains "cleansing sea salt."

Actually, I wouldn't mind having a bottle of the last one.  There are three girls in my study hall this year who talk and giggle constantly, and I would love to run up to them and spray all three of them directly in the face with Magic Salt Water, yelling, "Chill, Child!  Chill!" and laughing maniacally.

Nah, better not.  Not only would it most likely not work, I'm guessing their parents would object, as would my principal.  He'd probably make me double my dose of "Aromatic Irritability Treatment" for the rest of the school year.
Posted by Gordon Bonnet at 2:04 AM