Writing out your feelings

A paper in the journal Psychophysiology last week immediately caught my attention, as it linked a reduction in anxiety in chronic worriers with expressive writing.

The reason it piqued my interest is obvious to anyone who knows me; I'm a writer and a chronic worrier.  I always knew I felt good after meeting my writing goals, but I associated it with simple pleasure of accomplishment -- I never thought that the writing itself might be smoothing out some of my anxiety.

The paper was "The Effect of Expressive Writing on the Error-related Negativity Among Individuals with Chronic Worry," and was authored by Hans S. Schroder, Jason S. Moser, and Tim P. Moran, the first two part of the Department of Psychology at Michigan State University, and the last from Emory University in Atlanta, Georgia.  They write:


The relationship between anxiety and enlarged ERN [error-related negativity] has spurred interest in understanding potential therapeutic benefits of decreasing its amplitude within anxious individuals.  The current study used a tailored intervention—expressive writing—in an attempt to reduce the ERN among a sample of individuals with chronic worry.  Consistent with hypotheses, the ERN was reduced in the expressive writing group compared to an unrelated writing control group.  Findings provide experimental support that the ERN can be reduced among anxious individuals with tailored interventions.  Expressive writing may serve to “offload” worries from working memory, therefore relieving the distracting effects of worry on cognition as reflected in a decreased ERN.

"Expressive writing," the authors explain, "involves writing down one's deepest thoughts and feelings about a particular event," so it is expository writing and not storytelling; but it does make me wonder if writing fiction might serve the same purpose.  Of course, Hemingway would probably have disagreed: 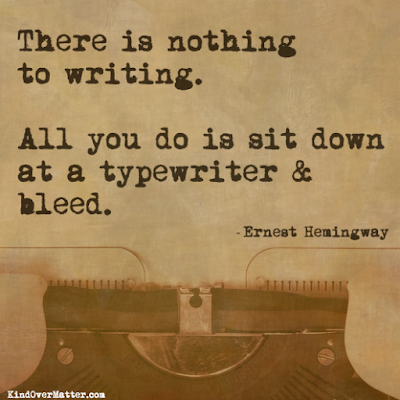 As would Dorothy Parker: 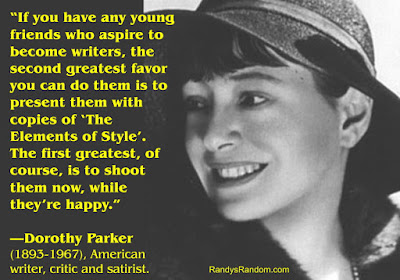 Be that as it may, the results were striking.  The authors write:

I would be interested to see if the effect occurred in fiction writers, and (even more interestingly) if it held consistent across genres.  There are authors who write generally optimistic, upbeat stories, that leave you with a sigh of contentment and a warm feeling in your heart.  I, however, am not one of them.  In my current work-in-progress, I just finished a scene yesterday in which (1) a child is an accidental victim of a shootout, (2) the child's father was wounded, and (3) the father's wound becomes infected in a situation where there is almost no access to medical care, with the result that he begs his friends to shoot him as a mercy killing.  This leaves his three friends in the horrific situation of whether to kill the man to put him out of his misery, as per his wishes, or to let him continue in intense pain, with a condition that will almost certainly kill him anyhow.

Not cheerful stuff.  And yet... when I was done yesterday, I felt a real sense that I'd written a powerful scene, that (while not uplifting) would grab readers by the emotions and swing them around a little, all the while inducing them to empathize with all four of the characters in the scene.  Cathartic to the reader -- and to me as well.

So anyhow, that's an interesting step that Schroder et al. could take, apropos of the therapeutic value of emotional writing.  As for me, I'm going to wrap this up, because I've got more scenes to write, not to mention more characters to do really horrible things to.  Oh, well, it was their fault, after all.  They should have known what they were getting into, wandering into one of my novels.
Posted by Gordon Bonnet at 2:08 AM