When I was a young and cocky junior in college, a couple of friends and I wrote a (very simple) computer program to generate free-verse poetry.  With input of a list of promising-sounding verbs, nouns, and adjectives, we were able to produce hundreds of poems that sounded a little like William Carlos Williams on acid.

It was pretty clunky stuff, really, although at the time my friends and I thought it was the funniest thing ever, a poke in the eye of the full-of-themselves modern poets.  Honestly, it was really nothing more than souped-up MadLibs.  But there were a few of the "poems" that got close to making sense -- that did in fact sound a bit like loopy, arcane examples of modern poetry.

Of course, that was almost forty years ago, and back then the capability of software (not to mention programmers' capability of writing it) was rudimentary to say the least.  Now, there are artificial neural networks that are able not only to learn, but to abstract patterns from observations in much the way a human child does, trying things out, seeing what works, and improving as they go.  And just last year, a very-far-evolved version of our Modern Poetry Generator produced a movie script by looking at tropes in dozens of futuristic science fiction movies, and then writing one of its own.

The neural network named itself Benjamin -- itself a curious thing -- and the result was Sunspring, a surreal nine-minute long script showing the interaction of three people in what appears to be a love triangle.  Best of all, the people who created Benjamin hired some actors to stage Sunspring (the link is to a YouTube video of the production), and it's predictably a mashup of nonsense and strange passages that come damn close to profound. 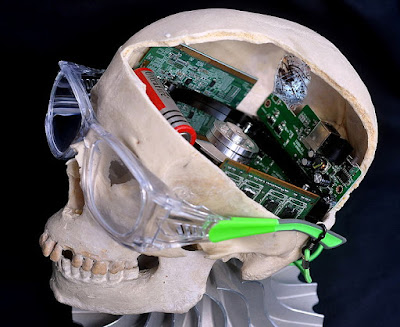 [image courtesy of photographer Michel Royon and the Wikimedia Commons]

Oscar Sharp and Ross Goodwin, who oversaw the creation of Sunspring, entered it in the Sci-Fi London contest -- and it won.  I suspect that part of its success was simply the novelty of seeing a film whose script was written by an artificial neural network.  But part of it was that there is a disturbing sort of sense behind the script, which you can't help but see when you watch it.

When Benjamin won the contest, his creators arranged for him to be interviewed by the emcee at the awards ceremony.  When Benjamin was asked how he felt about competing successfully against human filmmakers, he replied, "I was pretty excited. I think I can see the feathers when they release their hearts.  It's like a breakdown of the facts.  So they should be competent with the fact that they weren't surprised."

As a fiction writer, I find this whole thing intensely fascinating.  I've often pondered the source of creativity, not to mention why some creative works appeal (or are meaningful) to some and not to others.  It strikes me that creativity hinges on a relationship -- on establishing a connection between the creator and the consumer.  Because of this, there will be times when that link simply fails to form -- or forms in a different way than one or both anticipated.

One minor example of this occurred with a reader of my time-travel novel Lock & Key.  One of the main characters is the irritable, perpetually exasperated character of the Librarian, the guy whose responsibility is keeping track of all of the possible things that could have happened.  I describe the Librarian as being a slender young man with "elf-like features" -- by which I meant something otherworldly and ethereal, a little like the Elves in J. R. R. Tolkien but not as badass.  But one reader took that to mean that the Librarian was a Little Person, and she maintains to this day that she sees him this way.

I suppose this is why I always cringe a little when I hear they're making a movie of one of my favorite books.  That relationship between reader and story is sometimes so powerful that no movie will ever depict accurately the way the reader imagined it to be.  (I had a bit of that experience when I first watched the movie adaptation of Lord of the Rings.  By and large, I found the casting to be impeccable -- by which I mean they looked a lot like I pictured -- with the exception of Hugo Weaving as Elrond.  Hugo Weaving to me will always be Agent Smith in The Matrix, and in every scene where Elrond appeared, I kept expecting him to say, "I will enjoy watching you die, Mr. Frodo.")

So meaning in books, music, and art is partly what the creator puts there, and partly what we impose upon them when we experience them.

Which leaves us with a question: what, if anything, does Sunspring mean?  It features exchanges like the following, between one of the male characters ("H") and the female character ("C"):

Which I'm not sure actually means anything, but is certainly no weirder than dialogue I've heard in David Lynch movies.

In any case, as Benjamin's creators would no doubt agree, the application of neural networks and AI learning to creative endeavors is only in its infancy, and I suspect that within a few years, Sunspring will be considered as laughable an attempt at computer scriptwriting as our clumsy foray into poetry-writing was software 37 years ago.  But it does give us an interesting twist on the Turing test, the old litmus for determining if an AI is actually intelligent; if it can fool a sufficiently intelligent human, then it is.  Here, there's the added confounding condition of our bringing to a creative experience our own biases, visions, and interpretations of what's going on.

So if someone finds a computer-created work of literature, art, or music beautiful, poignant, or meaningful, where is the meaning coming from?  And how is it different from any experience of meaning in creative works?

I don't even begin to know how to answer that question.  But even so, I'll be waiting for the first AI novel to appear -- something that can't be far away.
Posted by Gordon Bonnet at 2:12 AM