Happy Halloween to all of my loyal readers.  I'm saying this because "Happy Scary Day Of Your Choice" sounds ridiculous, so if you don't celebrate Halloween, you can feel free to get your knickers in a twist.

Because it's a day long associated with legends about ghosts and hauntings and demons and so on, Halloween is not a big favorite with the ultrareligious types.  It's interesting, however, that the day itself has a (sort of) Christian origin; in the Celtic calendar, there were twelve months of thirty days each, which left five days at the end that belonged to no month.  Because of this, they were thought to be days when all of the natural laws were suspended, the dead came back to life, and other special offers.  The culmination was the last of the five days, Samhain, on which your local priest was supposed to get together with the pious members of the village and fight back the forces of evil, after which there was a big celebration complete with high-fives about how they beat the hell out of the demons yet again.  This practice was later co-opted by kids, who would disguise themselves as demons and go from door to door, demanding a gift (a treat) in exchange for their not vandalizing your house (a trick).

The next day, November 1 (All Saints Day) was a holy day, celebrating the start of the new year and the triumph of good over evil, and a time to remember the dead, at least the ones who were buried on sanctified ground.  All Saints Day is sometimes called "All Hallows Day," so the day before is "Hallow's Eve."

And thus Halloween was born. 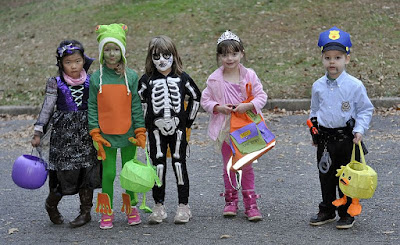 [image courtesy of photographer Jarek Tuszynski and the Wikimedia Commons]

So the whole thing has a connection to some at-least-sort-of-Christian mythology, although its roots go back much further, to the pagan rites of the ancient Celts.  I suppose I can see how the ultrareligious would object to the whole thing.  But this still doesn't explain Linda Harvey, televangelist and founder of Mission:America, who said last week that you should definitely not let your kids participate in trick-or-treating, because it could...

I kid you not.  Harvey said:


Yes, America’s recent exaltation of Halloween as a festival second only to Christmas owes a lot to promotion by homosexuals and their new favorite comrades — gender-confused males and females.

And as usual, the “LGBTQ” folks have no problem using any tool, Halloween included, to corrupt children.

How did she figure all this out?  It's hard to say, although she says she escaped from the magnetic lure of evil only by the skin of her teeth:


When I was 14, I had my own bizarre encounter with the enemy spirit world by experimenting with a Ouija board.  Since my parents were Episcopalians, I received no warnings of spiritual danger because at that time, they lacked a mature, informed level of faith.

But when my friend and I asked the “board” questions, some unseen force pushed the pointer around.  At times, our fingers were hanging on for dear life as it flew around the board, often spelling out messages.

I had little biblical background to understand what this presence surely was.  Now, I can only thank God for mercifully protecting me from being drawn more deeply into this spooky and alluring world where the unseen has real, tangible power.

What "this presence" was is the well-studied ideomotor effect, where people's conscious or subconscious thoughts drive their bodies to respond, often in such a way that it feels "reflexive" or out of their control.  So there's nothing much to a Ouija board, and it's only able to tell us what we already knew (or what we might imagine).  No evil "presence" required.

Oh, and Linda: that's a hell of a dig at the Episcopalians, not to mention your own parents.  I guess "ecumenism" forms no part of your religious practice, then?  Nor familial respect?

Fortunately for Linda and her followers, there's an alternate celebration available.  It's called -- and I am so not making this up -- "JesusWeen."  The idea is instead of dressing up in costume and getting candy on the evening of October 31, you dress in conservative clothing and pass out religious study materials.

I just bet the neighborhood kids are going to be busting down the front door to participate in that.

Anyhow, if you're planning on going out trick-or-treating tonight, be ready for attacks from Satan and coming back gay.  I guess we all have to decide what kind of risks we're willing to take.  And this is just me, but if I heard that a neighbor was passing out full-sized Mounds bars, I would throw caution to the wind with respect to either of these.
Posted by Gordon Bonnet at 2:01 AM