Today is my 57th birthday, which I bring up primarily because I look at that number and think, "How the hell could I be this old?"  I'm only three years from another Dreaded Zero Birthday, and next year is my fortieth high school reunion.

I have tried to combat this by remaining immature.  But even watching cartoons and laughing at fart jokes only gets you so far.

In any case, if any of you are looking for a gift for your favorite blogger, allow me to suggest something that I just found out about yesterday: a bottle of gin personally cursed by a real witch. 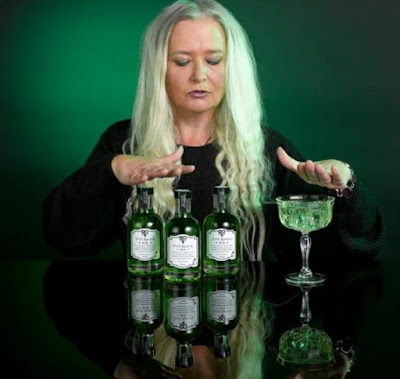 I'm not making this up.  It's called "Evil Spirits Gin."  Made by Union Distillers in England, the gin is produced by "an authentic and unique triple-chilling filter process," and then infused with apples and mint grown in Pluckley, which was listed in the Guinness Book of World Records as "the most haunted town in Britain."

I was naturally curious about Pluckley, and after a little research I found out one of the main ghosts in Pluckley is called "Watercress Woman."  "Watercress Woman" is apparently the ghost of an old lady that is seen frequently on Pinnock Bridge, near the village center.  The old lady apparently made a living by sitting on the bridge selling watercress.  Which, I must say, strikes me as a difficult way to make a living.  I would think that you'd have to sell a crapload of watercress in order to make enough money to buy anything, not to mention the fact that I don't think watercress is really all that big a seller in the first place.

Maybe it's more popular in Pluckley than it is in upstate New York.  I dunno.

Be that as it may, the old watercress saleswoman spent her days sitting on the bridge, selling watercress, while smoking her pipe and drinking gin.  Until one day she dropped her pipe, and it set fire to her gin-soaked dress, and she burned to death.

Which makes me wonder how soused she was.  Because I have drunk plenty of gin in my time, and I can say that I have never dumped enough of it on my clothes that I would burst into flame if I dropped my pipe, if I smoked a pipe, which I don't.

But she's only one of a variety of ghosts in Pluckley.  Amongst the other spooks and specters to be found there are the spirits of a screaming brickworker who fell off the factory roof, a highwayman who was run through with a sword and pinned to a tree, and a schoolmaster who was so unpopular that his students revolted and hanged him from a tree.

The last-mentioned making me feel like any problems I have in my classroom are minor by comparison.

But anyhow, back to Evil Spirits Gin.  Not only do the distillers add apples and mint from the Haunted Gardens of Pluckley to the gin, they also add an extract of an African plant called "devil's claw."  Why?  I have no idea.  Because of the devil or something.

The best part, though, is that after all of this, the distillers hand over the bottles of gin to Julianne White, the aforementioned "professional witch."  Which, frankly, sounds like a worse way to make a living than selling watercress.  But anyhow, White casts a spell on the gin, so that drinking it "empowers the drinker to follow whatever their hearts desire – whether it is for good or evil."

So that's pretty cool, and would be a nice benefit to having a gin & tonic.

In any case, I would definitely enjoy a bottle of Evil Spirits Gin.  Otherwise I will have to make do with ordinary uncursed gin, which means I won't be able to blame any hangovers I experience on black magic, an excuse I really wish I'd thought of thirty years ago.
Posted by Gordon Bonnet at 2:04 AM