I saw the light

We are currently in the middle of an early nor'easter, which is supposed to bring rain, wind, lightning, and thunder to us well into midday, which is probably why I was thinking this morning about the subject of Lights in the Sky.

The topic had also come up a few days ago in a conversation with a student, a young man who shares my skeptical outlook.  He showed me a video montage he'd found on YouTube of recent UFO sightings, and laughingly described a conversation he'd had with a friend who evidently liked the "alien spacecraft" hypothesis so much that he needed some reminding of what the "U" in "UFO" stands for.  In any case, I decided to do a little research regarding mysterious lights. 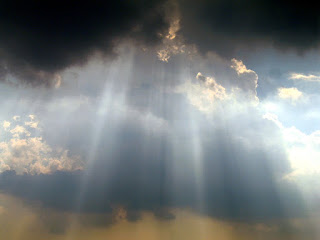 [image courtesy of photographer Andy Pham and the Wikimedia Commons]

Now, allow me to state up front that although several of these are as-yet unexplained, I strongly believe that they all have perfectly natural explanations.  The rush to blame any odd phenomenon on the paranormal is a tendency I've blogged about before, and I wouldn't want anyone to interpret my love of a mystery as an unwarranted attribution of these occurrences to ghosts, demons, or Little Green Men.

That disclaimer made, here are a few examples of odd light phenomena that I found out about.  I've included links for each of them that you should peruse if you want more information.

The Hessdalen Light has been seen since the 1940s in the valley of Hessdalen in Norway. It's a stationary, bright white or yellow light, floating above the ground, sometimes remaining visible for over an hour. With such a cooperative phenomenon, you would think it would be easily explained; but despite the efforts of scientists, who have been studying the Hessdalen Light for decades, there is yet to be a convincing explanation.  Hypotheses abound: that it is the combustion of dust from the valley floor; that it is a stable plasma, ionized by the decay of radon from minerals in the valley; or even that it is an electrical discharge from piezoelectric compression of quartz crystals in the underlying rock.  None of these is completely convincing, and the Hessdalen Light remains one of the most puzzling natural phenomena I know of.

Similarly peculiar are the Brown Mountain Lights, near Brown Mountain in the Pisgah National Forest of North Carolina.  These brightly-colored lights have been seen since the early 20th century, usually hovering near the horizon, and skeptics have claimed that they are the headlights of a train or automobiles, as there is a highway and a train track fairly near to the site where the lights are most often seen.  However, when a flood washed out the train overpass and rendered the highway impassable, the lights continued to be seen.  They're still seen today, apparently most commonly between September and November.

Likely to be a combination of lights from a highway and an atmospheric condition are the Paulding Lights, of Paulding, on the Upper Peninsula of Michigan.  This phenomenon is the subject of a variety of YouTube videos (search for "Paulding Lights" and you'll find a bunch), and in fact became the topic of an episode of Fact or Faked: The Paranormal Files on the Syfy Channel.  The FOF people, as you might predict, concluded that it was "unexplained."  However, after doing some digging myself, I found that researchers had concluded that the mysterious lights seen near Paulding were due to automobile headlights refracting through an inversion layer -- a layer of cool air near the ground bounded by warmer air above.  So I will respectfully disagree with the investigators on FOF and place this one in the file labeled "Probably Solved."

The Gurdon Light, of Gurdon, Arkansas, is one that has a lot of supernatural folklore attached to it.   It's a bobbing light seen in a wooded area near railroad tracks, and the legend is that it is a lantern held by a ghostly man who had been killed by a train.  Needless to say, I'm not buying that, and the information I found indicates that this one is fairly poorly documented -- leading me to surmise that it can be explained by nothing more than the overactive imagination of the superstitious.  Nonetheless, Gurdon remains a popular destination -- on Halloween.

Lastly, we return to Norway for what is in my opinion the best documented of these occurrences -- the Norwegian Spiral Anomaly of 2009.  (Do check out this link, which has excellent photographs and video of this strange and beautiful phenomenon.)  On the 9th of December in 2009, thousands of people all over central Norway took photographs and video footage of a spiral light in the sky, with a blue-green filament coming from its center, that opened up into a black hole.  Naturally, there was a rush to explain it as visitation by aliens, or as a physics experiment gone very wrong that had resulted in the formation of an actual black hole.  A more conventional explanation -- that it was a spiral vapor trail left by a failed flight of a Russian Bulava missile -- is only partially convincing; there was a missile test that day, and simulations of the pattern made by the ignited fuel from a spinning missile did form a spiral pattern, but the Spiral Anomaly looked essentially the same from all observation points, and this would not be true if it had been a missile vapor trail (some people would have seen it center-on, others from the side, etc.).  In my mind, it's still a mystery, and remains one of the most recorded, and most perplexing, light phenomena I've ever heard of.

So, there you have it; some reasons to keep your eye on the sky.  And even if I'm in no rush to attribute any of these to spirits or alien spacecraft, I have to admit that they are intriguing.  And there's something in all of us that loves a good mystery, isn't there?
Posted by Gordon Bonnet at 2:17 AM