A new restaurant has opened up in the pricy Ginza neighborhood of Tokyo, and it specializes in broth and sushi made from fugu.

For those of you unfamiliar with this particular culinary item, fugu is Japanese blowfish.  If you have heard about this stuff, most likely it's because it is wildly poisonous if not prepared correctly.  Correct preparation means removing all of the poisonous parts, especially the testicles of the male blowfish, one of which could easily kill an adult.  Don't worry, the website tells us; the reviewer ate some fugu sushi in ramen broth and didn't die.  He goes on, in fact, to tell us that if risking your life to experience the "pleasant, meaty texture" of fugu once wasn't enough for you, you can also order it deep-fried, and furthermore, they sell "canned fugu," which I'm thinking is never going to replace tuna.

I doubt, for example, that when I meet some friends for lunch at our local café, that I would order a fugu melt even if it was on the menu. 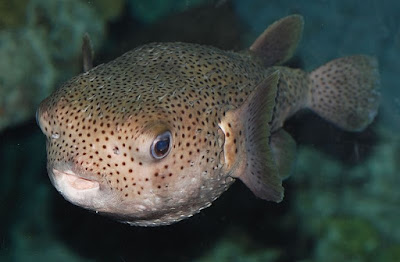 [image courtesy of photographer Jarek Tuszynski and the Wikimedia Commons]

In Japan, you have to have a special license to prepare fugu.  Apparently, if you prepare it correctly, it greatly decreases the likelihood that you'll die.  The poison, tetrodotoxin, is one hundred times more poisonous than potassium cyanide.  It is a sodium channel blocker, and as a result paralyzes the muscles, including the heart and diaphragm -- all the while leaving you conscious and aware of the fact that you're dying.  It is only found in particular tissues in the fish, and all of those tissues have to be scrupulously removed in order for the fugu to be safe to eat.  You can imagine, with something that toxic, it doesn't take much of a mistake to kill you -- it's difficult to be sure you've got every last tiny scrap of the poisonous tissue.  This is why in order to serve fugu in Japan, you have to pass a rigorous licensing exam, to show that you know how to cook so as not to kill your customers.

My question is, why would you take a chance like that in any case?  I like risk as well as the next guy, but I'm perfectly happy exercising that part of my personality by skinnydipping and riding rollercoasters.  I'm not so much interested in eating the Toxic Testicles of Death.

I wish I were making all this up.  In Japan, fugu is considered a delicacy, a word that should immediately raise your suspicion level.  In my opinion, the word "delicacy" is used only to describe food that, under normal circumstances, would never be consumed by anyone who was not participating in a fraternity initiation.  Other foods I've heard described as delicacies are hákarl (Icelandic fermented shark meat, which is described as having "a very strong ammonia-like taste") and lutefisk (a Norwegian fish product produced by soaking whitefish in lye; it is served with a mustard sauce that informed sources tell me "smells exactly like vomit").

On the other hand, in the interest of honesty, I must admit that when I was in Malaysia a couple of years ago, I tried durian, a fruit with such a strong odor that cutting one open is illegal in hotel rooms and on public transportation.  Food writer Richard Sterling describes it as having an "odor... best described as pig-shit, turpentine and onions, garnished with a gym sock."  Despite this, and probably because my sense of smell is shot after 30 years of working in a biology lab, I tried it... and thought it was delicious.  (The closest I can come to describing the taste is a cross between raspberry yogurt and almonds, but that doesn't really do it justice.)

I wouldn't come close to hákarl or lutefisk, however.  I'm an adventurous eater, a trait I've developed from years of overseas travel, but I do have my limits, and rotten fish is one of them.

Of course, even fermented shark and lye-soaked whitefish only put you in danger of tossing your cookies, or perhaps having your friends and family seriously question your sanity.  Fugu adds the frisson of possibly killing you.  It is the Russian roulette of delicacies.

Me, I don't see the appeal.  Maybe fugu tastes really great, I don't know.  The point is, so does dark chocolate, and you're not risking paralysis, coma, and death from eating it.  Still, I'm sure that people will continue to eat fugu, and people will continue to die.  In fact, in 2015 five men in Wakayama were poisoned when they specifically asked to eat fugu liver, which is one of the toxic bits.  The restaurant was closed, although it seems like this is more a case for a Darwin Award than it is for a citation against the chef.

So if I ever get to visit Japan, which I very much hope I will, I'm not going to try Death Sushi.  I don't really need a boost to my machismo that badly.  I'll stick with dark chocolate, or if I'm ever in Southeast Asia again, pig-shit gym-sock fruit, which really was pretty tasty.
Posted by Gordon Bonnet at 2:03 AM