Last week, Donald Trump addressed the "Values Voter Summit," a group of people whose Values apparently include supporting a thrice-married serial philanderer whose main claim to fame is embodying all Seven Deadly Sins in the same person.

Notwithstanding the mindblowing irony of someone like Trump addressing issues of morality, the Values Voters were wildly enthusiastic about the speech.  The part that got the most rousing round of applause was when he informed the Values Voters that he was going to make it legal to say "Merry Christmas" again:


America is a nation of believers, and together we are strengthened and sustained by the power of prayer.  George Washington said that “religion and morality are indispensable” to America’s happiness, really, prosperity and totally to its success.  It is our faith and our values that inspires us to give with charity, to act with courage, and to sacrifice for what we know is right.

The American Founders invoked our Creator four times in the Declaration of Independence -- four times.  How times have changed.  But you know what, now they're changing back again.  Just remember that...  Religious liberty is enshrined in the very first amendment of the Bill of Rights.  And we all pledge allegiance to -- very, very beautifully -- “one nation under God...”  To protect religious liberty, including protecting groups like this one, I signed a new executive action in a beautiful ceremony at the White House on our National Day of Prayer, which day we made official.

We are stopping cold the attacks on Judaeo-Christian values...   And something I've said so much during the last two years, but I'll say it again as we approach the end of the year. You know, we're getting near that beautiful Christmas season that people don't talk about anymore.  They don't use the word "Christmas" because it's not politically correct.  You go to department stores, and they'll say, "Happy New Year" and they'll say other things.  And it will be red, they'll have it painted, but they don't say it.  Well, guess what?  We're saying “Merry Christmas” again.

"People don't talk about" Christmas any more?  Then explain to me why this year the department stores started putting up Christmas decorations in September.  And I'm going to say this loudly, one more time, as plainly as possible:

I know a lot of liberals, atheists, agnostics, secularists, and what-have-you.  And not a single one of them gives a flying rat's ass if you say "Merry Christmas" or not.  The only two things I have ever heard any of them gripe about, apropos of the Christmas season, are the following:
And the whole "America is a nation of believers" thing is more than a little troubling.  What does that imply?  That by not being a believer, I'm not an American?  Or that I should just pack up and leave?  If you think that last bit is just me being alarmist, only two days ago I saw a post of a photograph of a sign in a shop window (don't know where it was taken) that said, "Here, we are ONE NATION UNDER GOD.  We say Merry Christmas.  We defend ourselves.  We salute the flag.  We worship Jesus.  And if you don't like it, LEAVE." 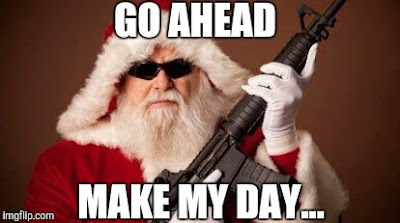 To which I'd respond, if I had the chance: I don't honestly care what you do.  You can live at the church and surround yourself with American flag wallpaper and salute it 24/7 with a gun in each hand, if that's what you want.  But if you imply that I'm not an American -- if, in fact, you're saying I don't have a right to live here -- because I don't do the same thing, I think you're sorely misunderstanding both the Right to Free Speech and the Separation of Church and State.

What it boils down to is that 99% of non-religious people don't object to, or even care, what others believe.  They're more concerned with not having a requirement of belief rammed down their throats. Okay, there are some asshole atheists who do disparage Christianity and Christians, and would love to see religious belief eradicated.  But you know what?  If you think that assholery is limited to the atheists, you aren't looking at other groups very carefully.

But messages of tolerance and live-and-let-live don't sell well to the perpetually outraged members of the Values Voter Summit, who think that Christianity is besieged and that Donald Trump is the Second Coming of Christ at the very least.  So if any people of that stripe are reading this, allow me to reassure you.

Relax.  Chill out.  We atheists have no intention of doing to you what you'd like to do to us.
Posted by Gordon Bonnet at 2:08 AM