Let me preface this post by saying, once, "I am not making any of this up."  Because, as you'll see, otherwise I'd have to say it every other line.

I will also suggest ahead of time that the folks who coordinate the Darwin Awards might want to keep an eye on the people I'm going to tell you about, because trust me, this is a Darwin Award waiting to happen.

What, you're probably asking, could induce me to make such a blanket statement right out of the starting gate, especially considering the ridiculous stuff I deal with here at Skeptophilia on a daily basis?  The reason is that a loyal reader sent me a link about a group of people who think...

... that the key to health and curing disease is in drinking turpentine.

You read that right.  Turpentine, i.e., paint thinner.  The stuff that has "Harmful or fatal if swallowed, do not induce vomiting" on the side of the container.  This has become a popular enough alt-med remedy that there is actually a (closed) Facebook group devoted to the practice.  The contention is that all disease is caused by parasites, and that turpentine will kill the parasites and therefore cure your disease.

Which is 1/3 true.  There are lots of diseases that are caused by something other than parasites -- genetic illnesses, for example.  So "killing the parasites" would only work if that's what's making you ill.

The part of it that is true is that turpentine will kill parasites.  The problem is, it also will kill you.  The upside is that your corpse will be delightfully parasite-free. 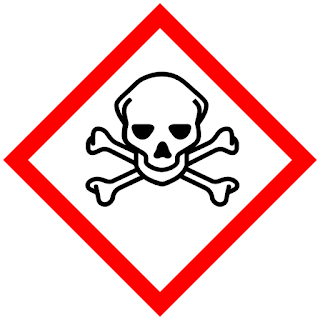 What about the "harmful or fatal" business?  That, turpentine-aficionados say, is put on there because turpentine manufacturers are "forced to do this by our corrupt FDA."  And if that doesn't appall you enough, there's the comment from one turpentine-drinker that when she has a bowel movement, "lots of red liquid comes out, is this normal?"

To which another proponent of the practice responded, "Maybe old and damaged intestinal wall is coming out.  Don't worry."

Okay, a couple of things here.

Time for some science.  Turpentine is what is called a nonpolar solvent -- a liquid that is good at dissolving other nonpolar substances, such as oils and fats.  (That's why it's used to clean up brushes after using an oil-based paint.)  Here's the problem: your cell membranes are largely composed of double layers of a specific kind of organic compound -- a type of fat called a phospholipid.  What's holding the two layers of the membrane together are hydrophobic interactions -- the watery solution both inside and outside your cells push away nonpolar (hydrophobic) regions of the phospholipids, and it forms sheets.  If you replace the water outside the cells with a nonpolar solvent like turpentine (or gasoline or kerosene or benzene), it replaces that repulsive force with an attractive one.

The Toxicology Database at the National Institute of Health website is unequivocal about this.  Here's what they have to say about turpentine:


Vapor is irritating to eyes, nose, and throat.  If inhaled, will cause nausea, vomiting, headache, difficult breathing, or loss of consciousness.  Liquid irritates skin.  If ingested, can irritate the entire digestive system, and may injure kidneys.  If liquid is taken into lungs, causes severe pneumonitis.  Men exposed to concentrations of 720-1100 ppm complain of chest pain, and vision disturbances.  Turpentine is a skin irritant and skin contact may cause eczema.  Workers in the chemical, rubber and welding industries exposed to turpentine have developed contact dermatoses.  In humans, chronic inhalation of turpentine has caused extensive glomerulonephritis.  Chronic dermal contact may cause allergic erythema, headaches, coughing, and sleeplessness.

Oh, but the National Institute of Health is probably corrupt, too.  My bad.

To some extent, I feel like letting these people do what they want, and if they die, well, it's not like the information wasn't out there.  A kind of life-or-death version of caveat emptor.   But part of me believes that even people who are this catastrophically ignorant shouldn't suffer gastrointestinal distress and kidney injury.

Much less pooping out blood, which I regret even thinking about.

So, if you are at all of the "alternative medicine" bent, and were considering drinking turpentine to rid yourself of the parasites causing your ingrown toenail, I have one thing to say:

Seriously.  That shit'll kill you.
Posted by Gordon Bonnet at 2:15 AM