You might have heard about people consuming pills of dried shark cartilage as nutritional supplements.  They're still widely available, in fact.  It's supposed to be anti-carcinogenic.  Why, you might ask, did people get this idea?

Because, the purveyors of shark cartilage pills say, sharks don't get cancer.  So if you grind up shark parts and consume them, you won't get cancer either.

There are just two problems with this practice:
This did not stop two of the most prominent cartilage shark spokespeople, I. William Lane and Linda Comac, from writing a book called Sharks Don't Get Cancer.  When the book was completely trashed by scientists and other reviewers, Lane responded by writing a second book four years later called Sharks Still Don't Get Cancer.

His publisher wisely recommended that Lane eliminate the subtitle he was planning to use, which was So Take That Nyah Nyah Nyah Nyah pfffttptbtbtbtbtb.

As usual, we have people who aren't letting little things like evidence and facts stand in the way of their claim.  You can still buy shark cartilage pills in many pharmacies, including a brand called, I kid you not, "BeneFin."

I bring all this up because yesterday I ran across a story about a woman who is doing something even stupider than consuming shark cartilage to prevent cancer; she is injecting herself with bacteria so she won't age.

It's not just ordinary, garden-variety bacteria, either.  These are bacteria that had been frozen in the permafrost of Siberia for, by some estimates, 3.5 million years, and now have been resuscitated by the thaw.  A Russian professor of geology named Anatoli Brouchkov noticed that the Yakut people who live in the area have a reputation for long lifespans, so he decided that (of course) it had to be because they were drinking melted permafrost water that had the bacteria in it.

Couldn't be genetics, or diet, or anything.

So he treated some plants, fruit flies, and mice with the bacteria, which has been dubbed "Bacillus F."  Brouchkov that they "seemed to have a rejuvenating effect," although gives no details about how he knew.  How do you distinguish between a rejuvenated houseplant and a tired, listless one?  Do non-rejuvenated fruit flies fly about in a dejected fashion?

Be that as it may, Brouchkov is certain enough of his claim that he's drinking water with Bacillus F in it himself.  But an actress who calls herself "Manoush" has gone a step further; she is now injecting herself with the bacteria.

Manoush, best known for such A-list blockbusters as Zombie Reanimation, The Shrieking, Philosophy of a Knife, and The Turnpike Killer, says she started taking the bacteria because like many of us, she's not so fond of the idea of getting old.  "Aging is a disease," she says.  "It is a genetic flaw to me.  Even as a teenager I could never accept the concept of getting older one day.  I don’t care what people think. I will stop at nothing to look and feel younger.  Nothing."

Which, I think we could all agree, would leave us with no option other than injecting 3.5 million-year-old Siberian permafrost bacteria directly into our bodies.

Manoush is absolutely convinced she's now aging backwards.  Me, I'm not sure.  I'm not fond of the gray hair, stiff joints, and crow's feet I've gotten in the past few years, but I don't think the answer is to jump on some loopy idea about anti-aging bacteria.  In fact, injecting bacteria into yourself is kind of a bad idea in general; perfectly normal, ordinary skin bacteria become a serious problem if they get into your bloodstream.  A friend of mine's father, in fact, almost died of a Staphylococcus aureus infection when his thumb got skewered by a rose thorn.

Staphylococcus aureus, I should point out, is a ubiquitous part of our skin flora.  On the surface of your skin, it's harmless.  Inside you, it can result in blood sepsis, which is a quick and spectacularly nasty way to die. 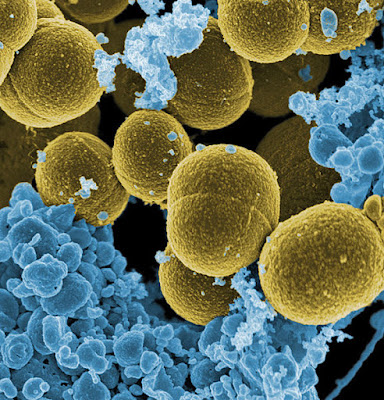 Staphylococcus aureus [image courtesy of the National Institute of Health]

So as much as I'd like perpetual youth, I'm not going to get in line behind Manoush for my bacteria injection.  I'll put up with the gray hair, which I'm told makes me look "distinguished," which isn't as good as "drop-dead sexy," but I guess I'll deal.
Posted by Gordon Bonnet at 1:57 AM