It's been a busy week here at Skeptophilia headquarters.  Our staff (me, my main dog Grendel, and Grendel's comical sidekick Lena the WonderHound) have been hard at work keeping you up to date on the latest from the Wide World of Woo-Woo.

Well, at least I have.  At the moment, Grendel is snoring on his bed in my office, and Lena is derping around outside.  I don't hear her barking at the moment, which is good, because she has been known to bark at:
So maybe she's not that useful, after all.

But while the dogs have been wasting time, I've been combing the internet for current news stories, and I found three things that you definitely will want to know about.

First, we have the discovery of some strange stone structures in the deserts of Saudi Arabia.  Four hundred of them have been found on the ancient lava plain Harrat Khaybar, and they've been christened "gates" because that's what they look like from the air, although their actual function is unknown.

Well, there's nothing like "mysterious stone structures" to get the woo-woos going, and we're already seeing speculation that they may have been the foundations of temples or landing strips for ancient aliens.  Me, I find the latter a little far-fetched, because as you can see in the above aerial photograph, the "gates" are laid out in a vaguely rectangular fashion, which is a stupid way to design an alien landing strip since spaceships generally don't corner all that well.

I'd also recommend a little bit of caution in investigating these structures, because the desert wastes of Saudi Arabia are where the Nameless City was located in the historical document of the same name by H. P. Lovecraft, wherein ye Mad Arab Abdul Alhazred found the cursed book of ancient magic, the Necronomicon.  And considering all the trouble that caused in later historical documents such as "The Dunwich Horror" and "The Case of Charles Dexter Ward," maybe we really shouldn't go poking around there, or we might wake up That Which Is Not Dead And Can Eternal Lie.


Then we have a story from central California that was spotted by a friend and loyal reader of Skeptophilia, wherein we learn that photographs have been taken of not one, not two, but five Bigfoots.  The photographer, Jeffrey Gonzales, a "self-described paranormal expert," tells quite a tale of his encounter.  He'd heard about the creatures from a farmer who lives on Avocado Lake, east of Fresno, and went to investigate.  Once he got there, the creatures were easy to find. "One of them, which was extremely tall, had a pig over its shoulder," Gonzalez said.  "And the five scattered and the one with the pig was running so fast it didn’t see an irrigation pipe and it tripped, with the pig flying over."

Which gives new meaning to the phrase "when pigs fly."  But Gonzales kept his presence of mind and fired off some photographs.  Fortunately, he remembered to put his camera on auto-blur, because this is one of the results: 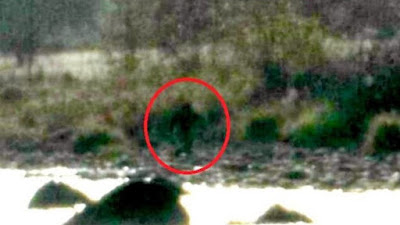 Which to me only proves one thing, namely, if your photograph is grainy enough, you can find anything in it.  In fact, if you'll look immediately to the right of the Bigfoot, you'll see a huge screaming creature with hollow eyes and a gaping, round mouth.

See it?  It's a wonder the Bigfoot wasn't running for his life, with that thing around.


Last, it wouldn't be a normal week without a new conspiracy theory, and this one is a doozy:

When Melania Trump appears in public, it's not actually Melania, it's a body double.

Twitter user Andrea Wagner Barton is absolutely certain about this, and points to a video clip in which President Trump was speaking to reporters about the recovery efforts in Puerto Rico, and made the statement, "My wife, Melania, who happens to be right here."  Barton thought this was odd, and tweeted the following:


Will the real Melania please stand up?
Is it me or during his speech today a decoy “stood in” for Melania??
And....
Why would the moron say “my wife, Melania, who happens to be right here...”
Seriously, watch very closely!

I did, and as far as I can tell, it's Melania.  On the other hand, that's what I would say, given that I'm probably a conspirator myself.  The conspiracy theorists disagree, however, and say that Melania hasn't been Melania for some time now.  Especially in the highly publicized video clip from Inauguration Day where her smile turned into a scowl, and the one in which the president tries to take her hand and she swats it away.

Of course, there are other explanations, such as Melania having more self-awareness than Donald does, which could also be said of many species of mollusk.  If I had to hang around with someone who made that number of cringe-worthy statements daily, I'd scowl too.


So that's our excursion in the deep end of the pool for this week.  Alien airstrips in the desert, Bigfoots carrying pigs, and FLOTUS body doubles.  I'm gonna wrap this up now, because Lena's just started barking, and I better go out and rescue her before she gets her nose bitten off by Mitch McConnell.
Posted by Gordon Bonnet at 3:01 AM