Given the other news this week, I think a lot of people have missed the story about a vote on a resolution in the United Nations, to wit, that countries "that have not yet abolished the death penalty... ensure that it is not imposed as a sanction for specific forms of conduct such as apostasy, blasphemy, adultery and consensual same-sex relations... ensure that it is not applied on the basis of discriminatory laws or as a result of discriminatory or arbitrary application of the law... [and] ensure that the death penalty is not applied against persons with mental or intellectual disabilities and persons below 18 years of age at the time of the commission of the crime, as well as pregnant women."

The bad news is that the United States was one of the 13.

This puts us in the company of Saudi Arabia, Iraq, Egypt, and China.  The Trump administration has not addressed why the United States voted "no," and at the time of this writing, there is no explanation on the State Department website. 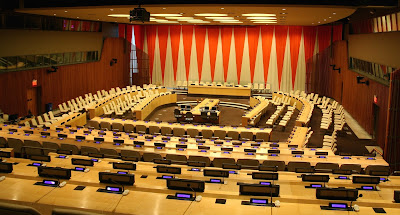 Call me cynical, but this sounds like a dog whistle to the Religious Right to me.  The current administration has made it clear that they are determined to undo every specific protection LGBTQ individuals have, and to place the Bible ahead of the Constitution in determining the law of the land.  No surprise, given Mike Pence as vice president; he went on record as saying that prohibiting same-sex marriage was an "enforcement of god's law," and that if made legal, it would trigger "societal collapse."

My general feeling is that if all it takes to make your society collapse is giving official recognition to the expression of love between two people who happen to be of the same gender, then your society was kind of a house of cards to start with.

A significant number of the members of Trump's cabinet are evangelical; in fact, it was revealed two months ago that five members of Trump's advisory staff -- Pence, Betsy DeVos, Ben Carson, Jeff Sessions, and Rick Perry -- attend a weekly Bible study session in a room in one of the government office buildings on Capitol Hill.  Reverend Ralph Drollinger, who runs the study group, is well known for this sort of thing; he runs Capitol Ministries, whose stated purpose is to "evangelize elected officials and lead them toward maturity in Christ."  About Attorney General Jeff Sessions, Drollinger said, "He will go out the same day I teach him something and I’ll see him do it on camera and I just think, 'Wow, these guys are faithful, available and teachable and they’re at Bible study every week they’re in town.'"

Predictably, no one in the administration sees any potential breakdown of the separation of church and state in all this.

But back to the United Nations.  I'm well aware that UN resolutions have no teeth, so even if the United States had voted to support the measure, it wouldn't have made a substantive difference in the way LGBTQ individuals, atheists, and the ex-religious are treated.  But as a symbolic gesture, it sends a hell of a message.  The fact is, we are siding with countries where I, as a blogger who has been openly critical of Islam, would be jailed and flogged at best, and at worst hauled out into the public square and beheaded.

If some member of the faithful didn't murder me first, as has happened over and over to atheist bloggers in Bangladesh.

Oh, but wait: you know what else Saudi Arabia, Iraq, Egypt, China, and the United States have in common?  They're all on the United Nations Human Rights Council.  Huh.  Funny thing, that.

In any case, I sincerely hope I'm wrong, that there was some other subtlety I'm missing that triggered the "no" vote.  It's hard for me to stomach the idea that I live in a country whose administration honestly wants to see gay people and atheists killed.  I shouldn't be surprised, however; the current favorite for Jeff Sessions's old Senate seat in Alabama is Roy Moore, who said that "Homosexual behavior is crime against nature, an inherent evil, and an act so heinous that it defies one's ability to describe it."

Moore currently is leading his opponent, Doug Jones, by an eight-point margin.  So maybe it's not that outlandish after all.

So until proven otherwise, I'm sticking with my initial conclusion that all of this is about Donald Trump reinforcing his image among the Religious Right as a godly man. I suppose this is understandable enough; heaven knows his actual behavior would never lead you to that conclusion.
Posted by Gordon Bonnet at 2:05 AM