The time-traveling drunk from 2048

As if we needed another thing to worry about, today we have: a time traveler from 2048 who has come back to tell us that next year the Earth is going to be invaded by aliens.

According to the story, which I have now been sent 14,398 times, the time traveler is named Bryant Johnson, and he showed up in Casper, Wyoming last week with a dire message for humanity in general, and the president in particular.  (Although it must be mentioned that he asked to speak to "the president of Casper," which is a little peculiar.)  According to radio station KTWO, which broke the story, Johnson was drunk at the time because being drunk helps you to time travel.

Which certainly squares with my experience with alcohol, and also reminds me of the following exchange between Ford Prefect and Arthur Dent from The Hitchhiker's Guide to the Galaxy:


Arthur: What are you doing?
Ford: Preparing for hyperspace.  It's rather unpleasantly like being drunk.
Arthur: What's so bad about being drunk?
Ford: Go ask a glass of water.

Johnson being drunk is also why he landed when he did.  Apparently he was aiming for early 2018 and missed.  Just as well; it'll give us more time to prepare for the invasion.

Johnson's not the first person who has ventured into the past to warn us about dire events.  There was John Titor, who back in 2000 and 2001 posted on a number of online bulletin boards that he was a military guy in 2036 who had come back to warn us that there would be a nuclear war in 2004 that would cause the government of the United States to fall, which would be terrifying if it hadn't turned out to be completely wrong.  And it's not like Titor's warning caused us to do anything differently; I don't see any evidence that humanity's overall derpy behavior changed in any way following Titor's pronouncements.

Then there's Håkan Nordkvist, a Swedish guy who was fixing his sink and got transported to the year 2042, where he met himself at age 70 and "had a great time," returning with a photograph of him and himself: 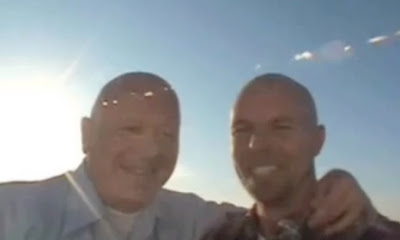 I find this upsetting primarily because nothing nearly that interesting happens to me when I work on the plumbing.

Then, we have the "time-traveling hipster" who shows up in a photograph taken in British Columbia in 1941: 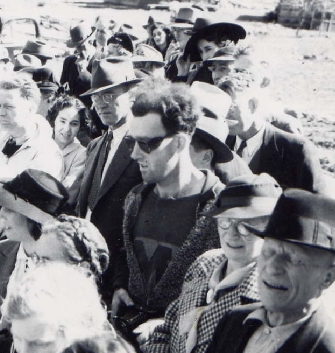 The gist of this one is that he's wearing a style of sunglasses that didn't exist back then, which some researchers looked into and responded, in effect, "Yes, they did."  So while his clothing is pretty casual, there's no reason to believe he wasn't from 1941, although admittedly he could be a time traveler anyhow who changed his clothes so as to fit in.  You never can tell.

In any case, I'm not inclined to worry much about this latest person to show up from the future.  For one thing, it was easy enough to check up on him and see if he actually has a past.  Which he does.  And given the fact that most of us have a significant online presence whether we want to or not, it was only a matter of time before something like this appeared: 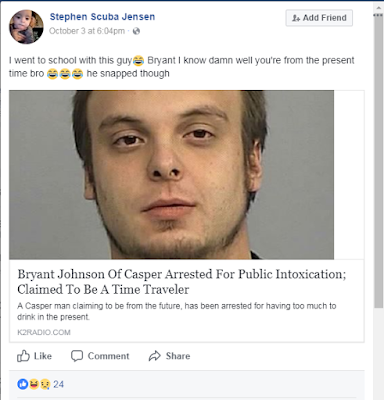 So there is apparently nothing to worry about next year, invasion-wise.

Me, I'm a little disappointed.  The way things are going, I would welcome our Alien Overlords.  Given the news I read daily, however, I have to wonder why the aliens would want to come here, because as far as I can see, there's no particular evidence of intelligent life here on Earth anyway.
Posted by Gordon Bonnet at 2:04 AM