Voodoo in the brain

I'm sure you've heard about the placebo effect, but have you heard of the nocebo effect?

If you know a little Latin, you can guess what it means.  Placebo is Latin for "I will please;" nocebo for "I will harm."  The nocebo effect occurs when you expect something to cause you unpleasant symptoms, and even though what you've consumed is harmless, you experience the symptoms anyhow.

We've known about the nocebo effect for some time.  It gained prominence due to investigations of "voodoo curses," where someone was cursed through a voodoo ritual, and lo and behold, the cursed individual sickens and dies.  Skeptical researchers don't credit this with voodoo actually working; they have come to realize that when a person thinks they're going to become ill, perhaps even die, the expected outcome manifests in the body. 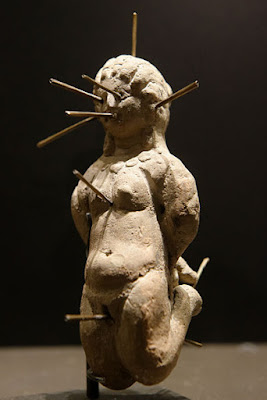 [image courtesy of photographer Marie-Lan Nguyen and the Wikimedia Commons]

A recent study gives us an even better lens into the nocebo effect, and how the brain influences health.  Any medical researcher will tell you that people in clinical trials of medications will often stop taking the pills they were given, usually citing unacceptable side effects.  What is less well known is that a substantial fraction of the people who end up dropping out of the trial actually were receiving an inert substance.

So the control group, in other words.  They were taking a sugar pill, but because they expected to have side effects from the medication, they went ahead and had side effects anyhow.

The most recent study, which was published in Science last week, was the work of four researchers at the University Medical Center of Hamburg, the University of Colorado, and Cambridge University, and had the unwieldy title, "Interactions Between Brain and Spinal cord Mediate Value Effects in Nocebo Hyperalgesia," and it had a fascinating result:

People in the control group of pharmaceutical clinical trials are more likely to have spurious unpleasant side effects if they're told the medication is expensive than if they're told it's cheap.

Furthermore, they have pinpointed the areas in the brain that are responsible for the foul-up.  The authors write:


Value information about a drug, such as the price tag, can strongly affect its therapeutic effect.  We discovered that value information influences adverse treatment outcomes in humans even in the absence of an active substance.  Labeling an inert treatment as expensive medication led to stronger nocebo hyperalgesia [negative side effects] than labeling it as cheap medication.  This effect was mediated by neural interactions between cortex, brainstem, and spinal cord.  In particular, activity in the prefrontal cortex mediated the effect of value on nocebo hyperalgesia.  Value furthermore modulated coupling between prefrontal areas, brainstem, and spinal cord, which might represent a flexible mechanism through which higher-cognitive representations, such as value, can modulate early pain processing.

Which is kind of amazing.  People who experience unexpected side effects are often labeled as hypochondriacs -- i.e., that they know perfectly well they feel fine, and are making up or exaggerating their symptoms out of fear or a desire for attention.  What's really happening appears to be far subtler.  Because of an expectation of harm, the brain actually manifests the symptoms the person feels they're likely to have.  Labeling the medication as expensive increases the subject's sense of having put something unusual into their bodies, resulting in more anxiety and worse side effects.

For me, the most interesting thing about this is the interaction of the brainstem and spinal cord, two parts of the central nervous system that are usually regarded as controlling completely involuntary responses, with the prefrontal cortex, often considered the most advanced part of the human brain -- the part that is associated with reasoning, decision making, and logic.  The fact that a freakout (to use the scientific terminology) in the prefrontal cortex activates a response in the brainstem is astonishing -- and also explains why people who experience the nocebo effect can manifest actual measurable medical symptoms.

And why some of them die.

All of which brings home once again how incredibly complex the brain is.  We're living at an exciting time -- the point where we're finally beginning to understand the thing in our heads that artificial intelligence pioneer Marvin Minsky called a "three-pound meat machine."  And, apparently, how easy it is for the machine to get fooled.  Kind of humbling, that.
Posted by Gordon Bonnet at 2:32 AM