I think it's a natural human tendency to be awed by what we don't understand.

I know when I see some abstruse concept that is far beyond my grasp, I'm impressed not only by how complex the universe can be, but that there are people who can comprehend it.  I first ran into this in a big way when I was in college, and took a class called Classical Mechanics.  The topic was why and how objects move, how that motion affects other objects, and so on.

It was the first time in my life I had ever collided with something that regardless of my effort, I couldn't get.  The professor, Dr. Spross, was a very patient man, but his patience was up against a classical-mechanics-proof brain.  On the first exam, I scored a 19.

And I'm convinced that he had dredged up the 19 points from somewhere so I wouldn't end up with a single-digit score. I ended that class with a C-, which I think Dr. Spross gave me simply because he didn't want me back again the following semester, spending another four months ramming my poor physics-deficient head up against a metaphorical brick wall.

There's one memory that stands out from that experience, nearly forty years ago, besides the overwhelming frustration.  It was when Dr. Spross introduced the concept of the "Hamiltonian function," a mathematical framework for analyzing motion.  He seemed so excited about it.  It was, he said, an incredibly elegant way to consider velocity, acceleration, force, momentum, and so on.  So I thought, "Cool!  That sounds pretty interesting."

Following that cheerful thought was an hour and a half of thinking, "I have no fucking idea what any of this means."  It was completely opaque.  The worst part was that a number of my classmates were nodding their heads, writing stuff down, and seemed to get it with no problem.

So I was either the only dumb one in the class, or they were just better at hiding their dismay than I was.

Anyhow, I think that was the moment I realized a career in research physics was not in the cards for me.

To this day, the "Hamiltonian function" remains something that in my mind symbolizes the Unknowable.  I have deep and abiding admiration for people for whom that concept makes sense (first and foremost, William Rowan Hamilton, who developed it).  And I'm sure it is elegant, just as Dr. Spross said.  But experiencing that elegance was (and probably still is) entirely beyond me.

It's this tendency to find what we can't understand awe-inspiring that has led to the idea of the god of the gaps -- in which gaps in our scientific knowledge are attributed to the incomprehensible hand of the divine.  Theologian Dietrich Bonhoeffer realized what the problem with this was, at least for people who are religious:


How wrong it is to use God as a stop-gap for the incompleteness of our knowledge.  If in fact the frontiers of knowledge are being pushed further and further back (and that is bound to be the case), then God is being pushed back with them, and is therefore continually in retreat.  We are to find God in what we know, not in what we don't know.

Anyhow, that was a long-winded preamble as an explanation of why all of this comes up in today's post.  I immediately thought of the awe-inspiring nature of what we don't understand when I read an article yesterday about two researchers at the University of Rochester, Tamar Friedmann and Carl Hagen, who found that a method for calculating the energy levels of a hydrogen atom generates the well-known number pi. 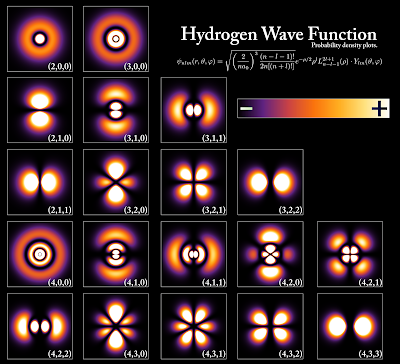 It turns out to have something to do with a mathematical function called the Wallis product, which says that you can generate π/2 by a simple series of multiplications:

Now, as for why this is so... well, I tried reading the explanation, and my eyes started spinning.  And I've taken lots of math courses, including calculus and differential equations, and like I said earlier, I majored in physics (as much of a mistake as that turned out to be).  But when I took a look at the paper about the energy levels of hydrogen and the Wallis product and gamma functions, I almost could hear Dr. Spross's voice, explaining it in a tone that implies that it would be immediately clear to a small child, or even an unusually intelligent dog.

And all of those feelings from Classical Mechanics came bubbling up to the surface.

So I'm left with being a little in awe about it all.  Somehow, even though I have no real understanding of why, the same number that I learned about in geometry class as the ratio between a circle's circumference and its diameter shows up in the energy levels of hydrogen atoms.  Predictably, I'm not inclined to attribute such correspondences to the hand of the divine, but I do think they're (in Dr. Spross's words) "elegant."  And even if I never get much beyond that, I can still appreciate the minds of the people who can.
Posted by Gordon Bonnet at 2:05 AM