I find it amusing to note how often woo-woo headlines are phrased as questions, e.g. "Did Aliens Build Stonehenge?"  "Does A Plesiosaur Live In The Hudson River?"  "Is Graceland Haunted By Elvis's Ghost?"

I live in constant hope that one day, I'll open one of these articles, and the entire article will consist of one word: "NO."  It hasn't happened yet, but it's this sort of cheery thought that keeps me going.

I thought for sure that would be the case this morning, when I took a look at an article entitled "Mysteries of Abydos: Egyptian Flying Machines?"  The article that followed (1) did not say "NO" anywhere, and (2) sadly, was serious, featuring the following photograph, a close-up of a panel from the Temple of Seti I in Abydos, Egypt: 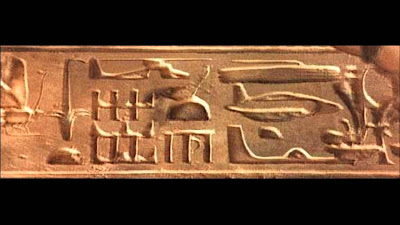 There then follows some fairly hysterical (in every sense of the word) descriptions about how the Ancient Egyptians apparently spent a great deal of time zooming about in helicopters, because there is clearly one depicted here.  There is, according to the author, also a submarine and a Back to the Future-style hoverboard shown on the panel, as well as several other "futuristic craft."

Now, at first I was optimistically certain that this had to be an isolated phenomenon; no one, with the exception of the author of the article, could possibly take this seriously.  Sadly, I was mistaken.  I did a bit of research, and was appalled to find that this panel is one of the main pieces of "evidence" used by the von Däniken Descent Of The Gods cadre to support their conjecture that the Earth was the alien version of Grand Central Station three thousand years ago.  Amongst the ancient-aliens crowd, the Abydos helicopter is apparently hugely popular, not to mention amongst those who think that Stargate is a historical documentary.

Which may well be the same people.

The interesting thing is that the whole thing was adequately explained years ago; a French UFO aficionado named Thierry Wathelet took the time to query some Egyptologists about the panel, and put together a nice explanation.  Several of the Egyptologists, evidently fed up with all of the nonsense that has grown up around Egyptian archaeology, told Wathelet to piss off, but a few of them were kind enough to give him detailed information about how the panel had been created, and what it meant.  The simple answer: the apparent helicopter is a palimpsest -- a place where a written text was effaced or altered to make room for new writing.  The "helicopter" is a combination of (at least) two hieroglyphs, and the fact that it looks a bit like an aircraft a complete coincidence.  Wathelet quotes an email he received from Katherine Griffis-Greenberg, a professor of archaeology at the University of Alabama:


It was decided in antiquity to replace the five-fold royal titulary of Seti I with that of his son and successor, Ramesses II. In the photos, we clearly see "Who repulses the Nine Bows," which figures in some of the Two-Ladies names of Seti I, replaced by "Who protects Egypt and overthrows the foreign countries," a Two-Ladies name of Ramesses II.  With some of the plaster that once covered Seti I's titulary now fallen away, certain of the superimposed signs do indeed look like a submarine, etc., but it's just a coincidence.   Well, hallelujah, and kudos to Wathelet for putting the whole thing together, and on a UFO site, no less.  Now, if a UFOologist can summon up this kind of skeptical facility, it shouldn't be that hard for the rest of us, right?

Unfortunately, the answer seems to be "no," and I base this on the fact that my perusal of the first few pages of the 787,000 hits I got from Googling "Abydos helicopter" seemed to be mostly in favor of the theory that the ancient Egyptians spent a good bit of their time sightseeing from the air.  So I guess my search will have to continue for an article whose headline asks a question, and the article itself just says, "No" (or even better, "What are you, a moron?  Stop fucking around on the internet and go learn some critical thinking skills.").  Until then, at least one more ridiculous woo-woo theory has been laid to rest -- at least for the seeming minority of folks who take the time to evaluate the evidence skeptically and scientifically.
Posted by Gordon Bonnet at 2:03 AM