At the time of this writing, I have been sent five times a link to a story about a Flat-Earther who wants to prove his case by taking a ride in a home-made rocket ship.

I know I say "I wish I was making this up" a lot, but honestly?  There's something kind of awesome about how earnest this guy is.  Most Flat-Earthers -- who were recently christened "Flerfs" by some wag on Twitter, an appellation that I think carries exactly the right amount of gravitas -- are so full of themselves and self-righteous that all they elicit from me is an eyeroll.  But this guy?

He's got a strange sort of moxie.

His name is Mike Hughes, and he's a 61-year-old retired limo driver from California.  He has spent over $20,000 to build his rocket, which includes (the article says) the bright yellow and red Rust-O-Leum paint that he used to letter "RESEARCH FLAT EARTH" on the side.  He bought an old motor home, took it apart, and converted it into a firing ramp.  The rocket runs on steam power, and the idea is to launch it over the town of Amboy, California today. 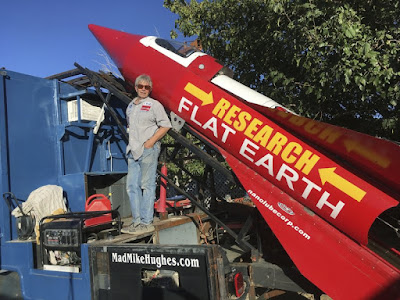 Hughes and his rocket ship

The rocket, Hughes says, will travel at a maximum speed of 500 miles per hour, something that does give him some trepidation despite his enthusiasm for the project.  "If you’re not scared to death, you’re an idiot," Hughes said.  "It’s scary as hell, but none of us are getting out of this world alive.  I like to do extraordinary things that no one else can do, and no one in the history of mankind has designed, built and launched himself in his own rocket.  I’m a walking reality show."

What exactly his launch will prove, Hughes doesn't seem exactly clear about.  "I don’t believe in science," he said, rather unnecessarily, in my opinion.  "I know about aerodynamics and fluid dynamics and how things move through the air, about the certain size of rocket nozzles, and thrust.  But that’s not science, that’s just a formula.  There’s no difference between science and science fiction."

Which explains how much overlap there is between NASA and Lost in Space.

Hughes has big plans, if the outcome of today's launch is different from what I expect, which is that he will leave a large impact crater surrounded by gaily-painted red and yellow shrapnel, rather like the times Wile E. Coyote strapped an Acme Jet Pack to his back and proceeded to fly directly into a cliff side.  If he survives, Hughes says, he's going to launch himself right into a new project, which is the California governor's race.

I wonder what his campaign slogan will be?  I think "Vote Flerf!  We're down to Earth!" would be a good choice.

What I'm wondering is why he thinks launching himself in a rocket will prove that the Earth is flat.  Does he think that a spherical Earth would mean that his ship would take off in a tangent line and end up in space?  Or that from up there, he'll be able to see the entire flat disc?  You can see how a different perspective could clear things up: 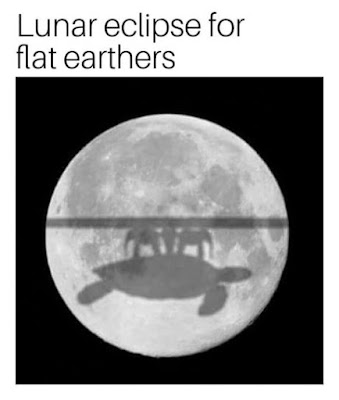 Anyhow, I wish him luck.  Despite the fact that I think he has a single Froot Loop where most of us have a brain, I have no desire to see him end up winning the Darwin Award for 2017.  So keep your eye skyward today.  Who knows?  You might see a red and yellow rocket streak overhead, unless his trajectory takes him out over the edge of the world, which would be unfortunate.
Posted by Gordon Bonnet at 4:18 AM