Well, it's happened again; a reader has sent me a weird superstition (this one almost amounts to an urban legend) that I'd never heard of before.

You've all heard about the goofy children's game "Bloody Mary," wherein you're supposed to stare into a mirror at night and chant "Bloody Mary" a bunch of times (even those in the know vary the requirement greatly; I've seen everything from twenty to a hundred), and then... nothing happens.

So it's a pretty exciting game, as you will no doubt agree.

What's supposed to happen is that the blood-drenched visage of a female ghost will appear in the mirror instead of your own face.  She's supposedly the restless spirit of a woman who killed children.  Which I can sort of sympathize with.  If I was yanked around and forced to appear in mirrors over and over all night long by kids at sleepovers chanting my name, I'd probably want to throttle the little brats, too.

Be that as it may, we have a tale out of Korea that is similar in spirit (rimshot), if not in detail, to the Bloody Mary legend.  This one is called "Elevator to Another World," and gives you instructions for using an elevator to access some hitherto unreachable and mysterious place. 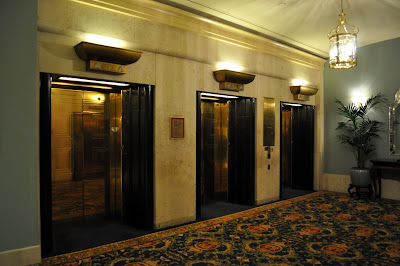 [image courtesy of photographer Joe Mabel and the Wikimedia Commons]

Here's what you're supposed to do:

So after having a nice look-see in the alternate universe, to get back, return to the elevator (it has to be the same one you used for steps #1-8), and do the steps again in that order.  When you press the button for the first floor in step #7 and the elevator begins to ascend, find the "stop" button and halt the elevator, then press the first floor button again.  You should return safely to the first floor, and must exit the building immediately.

What is this "Other World" like, you might be wondering?  From the account linked above, the two most common characteristics reported are that the Other World is (1) dark, and (2) empty. Which makes it sound rather unappealing. If I'm going to expend a lot of time and effort, I want to at least end up somewhere sunny, featuring drinks with little umbrellas.  But none of that, apparently.  Some people have mentioned seeing a "red cross" in the distance, but the author of the article says that "it may not be a cross."

This all puts me in mind of a wonderful book by Haruki Murakami called Dance Dance Dance, wherein a guy in a Japanese hotel takes an elevator and stumbles on a mysterious floor that is somehow sandwiched in between two other ordinary floors, and therein he meets a weird character called the Sheep Man.  It's weird, surreal fun, and is written with Murakami's signature lucid, simple style -- he has a way of making the oddest things seem as if they're absolutely normal.

I'm not sure if the Korean urban legend inspired Murakami's book, which would be nice because then it'd actually have accomplished something other than making gullible people waste time going up and down on an elevator.  On the other hand, if you want to give it a try, I encourage you to do so and post your results here.

Other than building security telling you to stop playing with the elevator.
Posted by Gordon Bonnet at 2:02 AM