In linguistics, there's a bit of a line in the sand drawn between the descriptivists and the prescriptivists.  The former believe that the role of linguists is simply to describe language, not establish hard-and-fast rules for how language should be.  The latter believe that grammar and other linguistic rules exist in order to keep language stable and consistent, and therefore there are usages that are wrong, illogical, or just plain ugly.

Of course, most linguists don't fall squarely into one camp or the other; a lot of us are descriptivists up to a point, after which we say, "Okay, that's wrong."  I have to admit that I'm more of a descriptivist bent myself, but there are some things that bring out my inner ruler-wielding grammar teacher, like when I see people write "alot."  Drives me nuts.  And I know it's now become acceptable, but "alright" affects me exactly the same way.

However, some research just published in Nature last week shows, if you're of a prescriptivist disposition, eventually you're going to lose.

In "Detecting Evolutionary Forces in Language Change," Mitchell G. Newberry, Christopher A. Ahern, Robin Clark, and Joshua B. Plotkin of the University of Pennsylvania describe that language change is inevitable, unstoppable, and even the toughest prescriptivist out there isn't going to halt the adoption of new words and grammatical forms.

The researchers analyzed over a hundred thousand texts from 1810 onward, looking for changes in morphology -- for example, the decrease in the use of past tense forms like "leapt" and "spilt" in favor of "leaped" and "spilled."  The conventional wisdom was that irregular forms (like pluralizing "goose" to "geese") persist because they're common; less common words, like "turf" -- which used to pluralize to "turves" -- eventually regularize because people don't use the word often enough to learn the irregular plural, and eventually the regular plural ("turfs") takes over.

The research by Newberry et al. shows that this isn't true -- when there are two competing forms, which one wins is more a matter of random chance than commonness.  They draw a very cool analogy between this phenomenon, which they call stochastic drift, to the genetic drift experienced by evolving populations of living organisms.

"Whether it is by random chance or selection, one of the things that is true about English – and indeed other languages – is that the language changes,” said Joshua Plotkin, who co-authored the study.  "The grammarians might [win the battle] for a decade, but certainly over a century they are going to be on the losing side.  The prevailing view is that if language is changing it should in general change towards the regular form, because the regular form is easier to remember.  But chance can play an important role even in language evolution – as we know it does in biological evolution."

So in the ongoing battles over grammatical, pronunciation, and spelling change, the purists are probably doomed to fail.  It's worthwhile remembering how many words in modern English are the result of such mangling; both "uncle" and "umpire" came about because of an improper split of the indefinite article ("a nuncle" and "a numpire" became "an uncle" and "an umpire").  "To burgle" came about because of a phenomenon called back formation -- when a common linguistic pattern gets applied improperly to a word that sounds like it has the same basic construction.  A teacher teaches, a baker bakes, so a burglar must burgle.  (I'm surprised, frankly, given how English yanks words around, we don't have carpenters carpenting.) 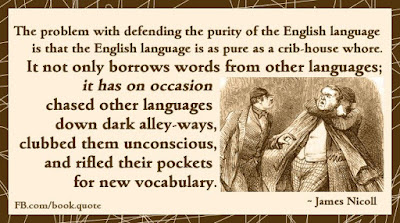 Anyhow, if this is read by any hard-core prescriptivists, all I can say is "I'm sorry."  It's a pity, but the world doesn't always work the way we'd like it to.  But even so, I'm damned if I'm going to use "alright" and "alot."  A line has to be drawn somewhere.
Posted by Gordon Bonnet at 1:25 AM