Reports are coming in from KwaMbonambi, a village in the KwaZulu Natal District of South Africa, of a shapeshifting monster terrorizing small children.

The monster was first spotted by a seven-year-old, who reported that he was at school and was cornered by "a short man with a long beard" in the bathroom.  Instead of looking for a creepy child molester type, the boy's mother came to the only reasonable conclusion: her son was being visited by an evil spirit called a "Tokoloshe."

So I started looking through my top-secret Cryptozoology Files to see if I could find anything out about the Tokoloshe, or if this was just a one-off.

Once I looked into it, I kind of regretted opening that particular can of worms.

Apparently this is far from the first time such a creature has been seen.  Reports of a Tokoloshe visitation from Karoo District back in 2013 gave us a clearer picture.  About those sightings, local warrant officer Zandisile Nelani said, "The community says that the monster changes shape while you are looking at it."  He went on to say that the monster had started out as a man in a suit, but had changed to a pig and then to a bat.  He hastened to add that although the creature had scared a number of residents, no people or livestock had been harmed by it.

This incident reminded me, against my will of the "ManBearPig" episode of South Park, which I had forgotten about, and honestly, I kind of wish it had stayed forgotten.

As little as two months ago, there were Tokoloshe sightings in Mozambique, where the creature was accused of running around having sex with married women, but was finally captured and paraded through the village.  Here are a couple of photographs: 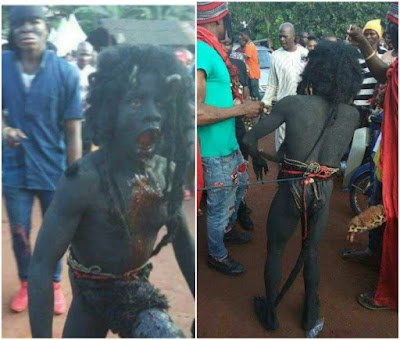 Because that's not fake-looking at all.

There is a long-standing tradition of the Tokoloshe (or Thokolozi) from the southern parts of Africa.   Descriptions vary.  We have the little bearded man sighted by the first grader in KwaZulu Natal, and the wild-haired demon in the photograph above; but informed sources tell me that the Tokoloshe most often appears as a brown-skinned man, hairy all over, with only one buttock.  This last feature seems a little odd, and makes me wonder if he only has a right butt cheek, only a left one, or just one huge symmetrically-placed butt cheek, the last-mentioned option bringing up other anatomical considerations that I would prefer not to think about.

On the other hand, the photograph of the sighting in Mozambique clearly shows a guy with the standard-issue two butt cheeks.  So not sure what to make of that.

Another characteristic of the Tokoloshe is that he is said to be very well-endowed in the reproductive equipment department.  Without going into graphic detail, let's just say that he is well-endowed to the point that tighty-whities would be pretty much out of the question.  Between that and having only one buttock, getting fitted at the tailor's must be a fairly humiliating experience, and possibly accounts for his legendary ill temper.

So we have here one very odd-looking dude.  But the key feature that identifies all three of the above sightings as the Tokoloshe is his shapeshifting ability.  The Tokoloshe carries around with him a magic pebble that allows him to become invisible and look like pretty much anything he wants to; in fact, he is said to be able to take the shape of many different animals, and also to fly.  So I think we have a definite match.

Being able to look like like whoever you want would also be handy given the Tokoloshe's legendary propensity for seducing women.  If you get accused of sleeping with another man's wife, you can just say, "It wasn't me, it was just the Tokoloshe impersonating me."  Which is pretty convenient.

What should the inhabitants of the villages visited by this evil spirit do?  One possibility is to make a Tokoloshe Repellant, but the problem is that the recipe I found requires Tokoloshe fat.  Obtaining that would seem to be a bit of a stumbling block, although one site I looked at said that it might be purchased from a muti, or purveyor of traditional medicine.  You can also appease the Tokoloshe by putting out food for him, but you must remember not to put salt in it; he apparently shares with many European spirit creatures the characteristic of not liking salt.  Sometimes witches subdue a Tokoloshe, and keep him around for their own purposes, about which I will leave you to speculate.  They do this by a combination of magic and luring him with food, and keep him docile by "trimming the hair over his eyes."

As for the mom of the first grader, she was counseled by Thandonjani Hlongwane, chairman of the KwaZulu Natal Traditional Healers' Association, to pay a hundred rand to get some "strong mufti" (magic) to keep the Tokoloshe away and protect her son.  The mother has taken her son out of school, a decision supported by the chairman of the local school board, Paradise Jali, who said, “We will establish a regular prayer programme.  That is the only way we can fight this.”

So the good news for the people of South Africa and Mozambique is that Tokoloshes mostly seem fairly harmless.  Apparently even the women who have been seduced by Tokoloshes report that the experience was pretty pleasant, and in fact there are some reports that women who have had sex with a Tokoloshe will never be satisfied by sex with their husbands and boyfriends.   In either case, the bad news (other than the obvious bad news to the aforementioned husbands and boyfriends) is that there doesn't seem to be much they can do about his presence.  They only have two choices, as far as I can see: either to put out food to appease a magical spirit with enormous junk and one buttock, or to try not being so damn gullible.

I know which one I think would be more effective.
Posted by Gordon Bonnet at 2:46 AM