As many of you know, I've been writing fiction for over four decades.  I won't claim that what I wrote in the first half of that period was good fiction, but it was a long period of honing my skills so that now I can (with all due modesty) tell a pretty good story.

Something my publisher has encouraged me to do in the last three years is to push into what he calls "deep point-of-view."  In deep point-of-view, the reader isn't watching the character act; the reader becomes the character.  The dialogue and narrative are so immediate that you are, effectively, seeing through her eyes and hearing through her ears.

It's not an easy skill to master, and to be honest I'm still trying to learn how to do it effectively. But when done well, it is incredibly powerful, allowing us to feel as if we are actually inhabiting the imaginary worlds that authors create. 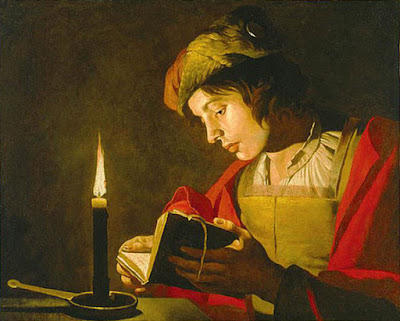 This connection between language and our sense of space is why I found some research published last week in the journal Neuroimage so fascinating.  The study, described in the paper "Cortical Networks for Reference-Frame Processing are Shared by Language and Spatial Navigation Systems" by Nikola Vukovic and Yury Shtyrov of Aarhus University in Denmark, looks at the way our arrays of neural structures called "cortical generators" function when we are picturing ourselves finding our way through a crowded space -- and many of the same ones are activated when we interpret either written or spoken language.

Previous research had distinguished between people who are spatially egocentric and ones who are spatially allocentric -- the first primarily mapping the world based on the position of objects relative to their own bodies, the second considering positions as relative to other objects in the surroundings (and therefore independent of the observer's own position).  After performing tasks to sort test subjects into egocentric and allocentric types, Vukovic and Shtyrov had them navigate their way through a computer simulation of a twisty tunnel.  Afterwards, the subjects were asked to match pictures to sentences describing what was happening in them.  The sentences differed, however, in point of view; some were describing action as if it were outside of the test subject ("The man walks up to the door and knocks on it"); others as if the test subject was actually inside the story ("You walk up to the door and knock on it").

During both tasks, subjects were connected to an electroencephalogram (EEG) machine, which monitored the activity in various parts of the brain.  And interestingly, the egocentric people performed better on the tunnel test; even more interesting was that the regions of the brain active in egocentric people during the tunnel test were the same ones that were active when they were placed inside the story by the wording of the description.

"When we read or hear stories about characters, we have to represent the inherently different perspectives people have on objects and events, and ‘put ourselves in their shoes,’" Vukovic said.  "Our study is the first to show that our brain mentally simulates sentence perspective by using non-linguistic areas typically in charge of visuo-spatial thought."

Shtyrov, who co-authored the study, added, "Brain activity when solving a language task is related to an individual's egocentric or allocentric perspective, as well as their brain activity in the navigation task.  The correlation between navigation and linguistic activities proves that these phenomena are truly connected...  Furthermore, in the process of language comprehension we saw activation in well-known brain navigation systems, which were previously believed to make no contribution to speech comprehension."

As an author, I find this tremendously exciting.  Writers call the creation of their fictional settings "world-building," and this turns out to be true in a very deep way.  By writing so as to put the reader inside the story, we are engaging the same neural circuitry that allows us to navigate the real world. This explains the ability of good fiction to transport us, to feel as if we're right there in medieval France or imperial Japan or Mordor or Tatooine.  When we have this experience, it's because our brain is allowing us to create an inner world -- but one that, at least for a short time, can seem as real as the world around us.
Posted by Gordon Bonnet at 1:46 AM