Because ultra-religious televangelist Jim Bakker is totally not about making money, today we consider his "Faith-based Home Shopping Network."

This was one of those links I was hesitant to click, but I'm glad I did, because when I landed there the first thing I saw was a video clip of a guy selling "13 Extreme Warfare Survival Bottles" for $250, which, if you buy them right now, come with "14 Bonus Christmas Ornaments."  Which was kind of wonderful for the juxtaposition, if for nothing else.  (I suppose even if we Evil Unbelievers are waging Extreme Warfare on the Christians, and the Beast with Seven Heads is chomping up the devout right and left, you still shouldn't neglect to set up your Christmas tree.)

So I poked around on the site a little.  There were baseball hats featuring crosses, some nutritional supplements containing colloidal silver (which has little health benefit although it does turn your skin blue), and some oddments like a camp shower and a sippy cup for toddlers.  But I noticed something interesting in the food category; virtually all of the foods offered are large-quantity freeze-dried goods and big containers of packaged mixes.

Apparently, Bakker is certain there's going to be a horrific apocalypse, but he wants to make sure that at least during the carnage we can chow down on a nice big stack of pancakes. 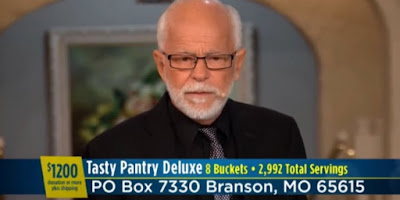 That, my friends, is a lot of pancakes.

Bakker's empire, of course, is built on two things: (1) donations, and (2) fear.  He has his followers convinced that Christianity is under attack (both in the figurative and literal sense) from secular people like myself, despite the fact that all the atheists I know just want to be able to live their own lives without government-supported religion being rammed down our throats.  Oh, and having people like Bakker and his ilk denying rights to others based on their beliefs and sexual orientation.  But I guess in his mind, this constitutes a frontal attack.

I suppose it's to be expected that I think the situation is actually the other way around.  Without even trying hard, I found the following stories this morning:
And that's just from the last couple of days.  So if there really is a war on Christianity, Christianity seems to be winning.

So, to put it bluntly, Bakker and company are lying.  They're capitalizing on people's fears so they can obtain money and power.  Which is kind of odd given their other professed beliefs.  Didn't someone once say that the way to salvation begins with giving everything you have to the poor?

Hmm.  Wonder who that was.

Even so, Bakker doesn't seem to be losing any of his followers.  Neither have the other multi-millionaire televangelists like Kenneth Copeland, Franklin Graham, and the ironically-named Creflo Dollar.  Instead, such hypocritical money-making schemes seem to be making these religion-for-profit scam artists filthy rich.

Praise the lord and pass the pancakes.
Posted by Gordon Bonnet at 2:02 AM