I find it a little astonishing that after seven years in the business of blogging about scoffing at the paranormal, I can still run into claims I've never heard of before.

This just happened yesterday, when a long-time loyal reader of Skeptophilia sent me an email with a link and a message saying, "What the hell is this?"  And thus I was introduced to the wacky claim that has become known as the "Stone Tape Theory."

First off, for the good of the order, let me officially lodge a complaint about calling this a "theory."  "Theory" has to be one of the most misused words in the English language, and that misuse never fails to get my goat.  Which explains why I become apoplectic with rage when someone says about evolution, "It's only a theory," as if the word meant "some loopy claim I came up with two nights ago in the corner pub after my third pint of beer, and which could as easily be wrong as right."

To a scientist, a theory is a system of ideas, supported by all the available evidence, that explains a natural phenomenon.  Saying "evolution is a theory" isn't an insult; it means "evolution is the best model we have."  If something is a theory, it's passed the test of scientific inquiry, and holds up to scrutiny.

Okay, now that I've gotten that out of my system, what is the "Stone Tape" thing?  It's an explanation of hauntings and other paranormal phenomena, which claims that they occur because a powerfully emotional or traumatic event happened on the site -- and those emotions were somehow transferred to the soil, rocks, trees, and so on that surround it.  That's why, proponents say, hauntings often cease when the building in which they occur is remodeled or torn down; you've gotten rid of the object(s) on which the events were imprinted. 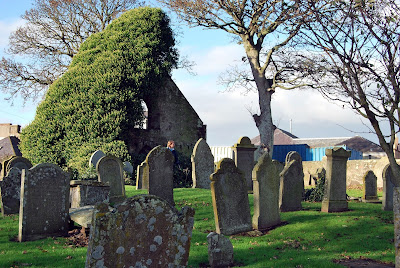 [image courtesy of photographer Russ Hamer and the Wikimedia Commons]

So hauntings aren't actual spirits (whatever the hell an "actual spirit" would be).  There's no awareness or anything.  What you're seeing and hearing is like playing back a poorly-recorded tape of the events in question -- a sort of residuum of electrical energy from the emotions of the people in question.

I have a few responses to all this, as you might imagine.

First, if the electrical energy from our brain when we experience strong emotions was able to be "imprinted" on inanimate matter, you have to wonder why (1) it doesn't happen all the time, and (2) you don't get instant replays from people, including yourself, who are still alive.  For example, if all it took were strong emotions, you'd think there would be a residue of dismay from my AP classes when I passed back their first quiz, and that now every time I went into the room, there would be ghostly silhouettes of 21 students with ghastly expressions, murmuring, "I guess I better study next time."

But I've never heard of anything like this happening.  However, that is small potatoes compared to my other question, which is: how on earth could your emotional energy "imprint" on a rock?  I have some quartz crystals on the shelf in my classroom, and I decided this morning to spend five minutes thinking rageful thoughts at them.  I thought that since they were crystals, it might work better, because crystals, you know?  But afterwards there was no change in the quartz, no sense of having my anger re-radiated back out at me.  They looked exactly the same as before, and didn't seem at all flustered.

I got the same results with my coffee cup, a bag of potting soil, and a deer skull that sits on top of one of my glassware cabinets.

So we're confronted with this little problem called "lack of a mechanism."  There's no way that the tiny changes in electrical field generated by your thoughts -- changes that are small enough that you need a sensitive machine, an electroencephalogram, to detect -- could cause any changes in the matter in the area.  I have the same objection to claims of psychokinesis; the Law of Conservation of Energy, which is strictly enforced in most jurisdictions, would imply that if you used your psychic powers to lift (say) a car, you would have to expend as much mental energy as the increase in gravitational potential energy the car experiences by being up in the air.

Which is a huge amount, something you can infer from imagining what would happen if the car suddenly released that potential energy by falling on you.

So I'm not buying either the Stone Tape *grumble, grumble* "Theory" or claims of psychokinesis.  Not only is there no evidence that either one exists, there's no plausible mechanism by which either could occur without breaking basically every law of physics in the book.

On the other hand, if the next time I'm putting away glassware, the deer skull tumbles off the shelf and conks me in the head, I suppose it will serve me right.
Posted by Gordon Bonnet at 2:13 AM