The voice of truth

Having been a blogger for seven years -- the fact of which I find a little astonishing -- I am well aware of the difficulty of coming across with the right emotional tone in writing.

Especially given the fraught nature of many of the topics I address, I'm sure that my words sometimes elicit strong emotions.  (Cf. the post I did a couple of days ago on hate mail.)  In some cases, the ire is probably justified; perhaps I stepped on your toes about some dearly-held belief of yours, which is bound to raise people's hackles.

On the other hand, I am often afraid that what I'm saying will be misconstrued, not because of the words themselves, but because of the inherent deficiency of the written word in representing the writer's motivations and emotional content accurately.  It's why emails so often generate misunderstandings; it's also why people often feel freer to be nasty online than face-to-face.  When we lack the visual cues of people's facial expressions and body language, we not only are more prone to misinterpreting what people's words mean, we sometimes feel less inhibited about saying things we'd never dream of saying if the person was standing right in front of us.

But apparently you don't even need to see the person's face to diminish this tendency.  A recent experiment by Juliana Schroeder of the Haas School of Business at UC-Berkeley, and Michael Kardas and Nicholas Epley of the University of Chicago, has shown that all you need to add is a voice.

In "The Humanizing Voice: Speech Reveals, and Text Conceals, a More Thoughtful Mind in the Midst of Disagreement," that appeared at PubMed a couple of weeks ago, the researchers showed that you're more receptive to viewpoints you disagree with, and less judgmental about the people stating them, if you hear those statements spoken rather than simply reading them in text form.


A person's speech communicates his or her thoughts and feelings.  We predicted that beyond conveying the contents of a person's mind, a person's speech also conveys mental capacity, such that hearing a person explain his or her beliefs makes the person seem more mentally capable-and therefore seem to possess more uniquely human mental traits-than reading the same content.  We expected this effect to emerge when people are perceived as relatively mindless, such as when they disagree with the evaluator's own beliefs.  Three experiments involving polarizing attitudinal issues and political opinions supported these hypotheses.  A fourth experiment identified paralinguistic cues in the human voice that convey basic mental capacities.  These results suggest that the medium through which people communicate may systematically influence the impressions they form of each other.  The tendency to denigrate the minds of the opposition may be tempered by giving them, quite literally, a voice.

Which is fascinating, if a little unsurprising.  After all, we are social primates, and we evolved in a context of living in groups in which communication was always face-to-face.  We're exquisitely sensitive to subtleties of expression (nicknamed microexpressions), often on a completely subconscious level.  Experiments have shown that we use minor cues such as pupil dilation size to make judgments about attractiveness, and the imperceptibly tiny back-and-forth movements of the eye called microsaccades can give you information about emotional state and what you're paying attention to (even if you're trying to hide that fact). 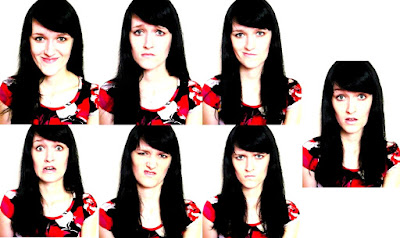 [image courtesy of photographer Lydia Icerko and the Wikimedia Commons]

And as far as voices go, small differences of inflection can provide huge cues as to what the speaker's intent was.  Consider the following phrase: "She gave the money to him."  Now speak the words aloud, but the first time put the emphasis on the word "she," then on "gave," then on "money," then on "him."

Each one has a different implication, doesn't it?

So if we're reading what someone's written, we're losing access to the cues that might tell us such important information as what the person's motivations and emotional state was when they wrote it.  It's no wonder this leads to frequent misjudgments.  We're trying to parse a person's words based on incomplete data.

This should make us a little more cautious about deciding that we know what people mean when we read an email -- or a blog post.  Clear communication is one thing, and (being a writer) I'm all for that.  But no matter how clear we are, we're never going to be able to communicate emotional depth via the written word as well as we can in person.

So if you think your favorite blogger is being an asshole sometimes, you might want to give him the benefit of the doubt.
Posted by Gordon Bonnet at 3:57 AM