Things have come to a sorry state when it's the strict Christians who are advocating lying.

I wish I was making this up.  Look, I know I'm not religious myself, but if someone subscribes to a belief system that encourages them to be more honest, to treat their fellow humans with greater respect, to be more generous and compassionate, I've got no quarrel with it whatsoever.  But it's shocking how often it goes the other way -- religion being used as an excuse to exercise some of our worst instincts, including prejudice, insularity, bigotry, and suspicion.

And, apparently, dishonesty.  Evangelist and Christian activist "Coach" Dave Daubenmire, on his radio program Pass the Salt, was ranting against the people who voted against Roy Moore in the Alabama State Senate election, and said something that was more than a little troubling:


When I hear people say, "Well, Judge Moore is not worthy of the office if he’s lying about what he did," I want to grab them and I want to slap them upside the stinking head.  Judge Moore is trying to infiltrate an ungodly system and the stakes in this campaign are so great for the cause of Christ and Judge Moore is being lambasted by the holier-than-thou Christians who think [the Bible] says we can never lie.

It’s best to lie if it advances the kingdom of God.  There, I said it.

Well, first; "think" the bible says you're not supposed to lie?  I mean, there's an entire freakin' commandment about not bearing false witness.  And I found the following without even trying hard:

Which sounds pretty unequivocal, even to a godless heathen like myself. 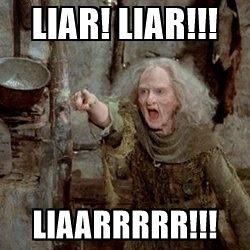 Also, consider what it is that Daubenmire is excusing Moore from lying about.  Moore has steadfastly denied allegations of sexual harassment against girls as young as fourteen.  So it's not like he lied about how much beer he drank last night.  These lies are about hurting children, for fuck's sake.

Okay, yeah, I know at this point they're only allegations.  But what's interesting is that Daubenmire never argues that Moore didn't do these things.  He's saying that even if he did, and lied about it, he still deserves to be in the Senate because he will "advance the kingdom of God."

All I can say is, if the kingdom of God has Moore and Daubenmire as spokesmen, maybe the "ungodly system" would be a step up.

Oh, and before I get off the topic; there's another quote from the bible that doesn't so much apply to lying in general as it does to people like Daubenmire and Moore.  It's 1 John 4:1, do you know it?

Beloved, do not believe every spirit, but test the spirits to see whether they are from God, for many false prophets have gone out into the world.