Children of the sun

Long-time readers of Skeptophilia may remember that a few years ago, I did a piece on the "Indigo Children" -- kids who are the "next step in evolution," as evidenced by the fact that they're sensitive, have paranormal abilities, and indigo-colored auras.  But these woo-woo ideas tend to become passé pretty quickly; before you knew it, every other family in your neighborhood claimed that their offspring was an "Indigo Child."

So there was no way the woo-woos were going to have their kids labeled with something so common and pedestrian.  They came up with the next level, which were the "Crystal Children" -- who you could recognize because they had "large eyes and an intense stare" and were able to "function as a group consciousness rather than as individuals."  Which was clearly much more special than those dumb Indigo Children were, even though it makes them sound like the scary kids in Children of the Corn.

Here's a little bit about the "Sun Children:"


It has been scientifically proven that the new children, being born since 2007, have been born with 13-strand DNA, which means that they will have far greater abilities than we have ever had.

So plain old two-stranded DNA's not enough?  I've taught genetics for thirty years, and I never knew about the principle of "the more strands, the better."


These children are volunteer souls, who are now being born, to become the New Leaders, who will be leading the world, from 2050 and onwards. By then the New Golden Age will have been anchored in by the Indigo, Crystal and Rainbow children, who have incarnated after the World War II.

A lot of the Indigo, Crystal, and Rainbow children were COSMIC souls, from other galaxies and star systems, who were involved with the CREATION of this planet, when it was birthed.

Well, hell.  I missed the "Rainbow Children."  I wonder how many strands their DNA has?  Probably nine or so, I would expect, if you kind of split the difference.

And hey, I was born after World War II myself!  I wonder what kind of child I was?  My parents would probably have answered that question "a pain in the ass," but maybe they didn't know how to see auras.


It is of great IMPORTANCE, for the PARENTS of these new SUN children, to understand, that what worked for them and their parents, will simply not work for these children!

Fact is, because of their 13 strand DNA, they will have all 12 chakras fully activated: - which means that they HAVE THEIR STELLAR GATEWAY WIDE OPEN!  This means they are EXTREMELY SENSITIVE TO LIGHT, TO SOUND VIBRATIONS, TO FREQUENCIES, AND MOST OF ALL, TO THE UNSEEN WORLD - WHICH TO US IS NOT REAL - BUT TO THEM IT IS.  THIS MAKES THEM HIGHLY PSYCHIC, WITH ABILITIES THAT WE HAVE FORGOTTEN HOW TO USE: TELEPORTATION, KENESIS [sic], TELEPATHY, SHAPE-SHIFTING, MOVING OBJECTS, HEARING WHAT IS SAID IN OTHER ROOMS, ABLE TO REMOTE VIEW, ETC.

I'd be satisfied if they had the ability to turn off their caps lock.

But man, that's a lot of abilities, isn't it?  Makes me kind of glad I'm not in the planning-for-a-family stage of things.  My two sons were hard enough to handle as toddlers; I can't imagine how life would have been if they'd been able to teleport, shape-shift, and hurl heavy objects around with their minds. They kind of fought with each other constantly as children, being personality types so different from each other that it's hard to comprehend how they came from the same gene pool, and if they'd been able to fight using telekinesis, I'm seriously in doubt that there'd have been any survivors, and that includes our house.  They did enough damage hitting each other with stuff the ordinary, non-Sun-Children way.

So I'm a little mystified as to how all of those would be good things. 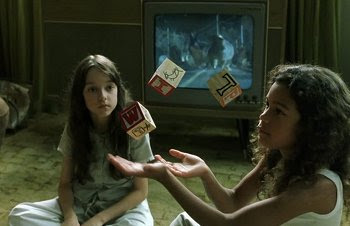 Oh, and about the wide-open stellar gateway (whatever the fuck that means) and the sensitivity to stuff, she has more to say:


THIS MEANS THAT THESE CHILDREN WILL HAVE TO BE KEPT AWAY FROM ELECTRONIC DEVICES WHICH ARE JAMMING THEIR FREQUENCIES: Television sets, computers, mobile phones etc.  They will be fascinated with it, but beware: some of the members of a certain group of people on this planet, KNOW THIS, and are PURPOSEFULLY JAMMING THE FREQUENCY WAVES OF CHILDREN AND ADULTS, VIA SATELLITE COMMUNICATION SYSTEMS, AND THIS IS DONE AT SUCH A FREQUENCY, THAT WE ARE NOT EVEN AWARE THAT WE ARE BEING HELD HOSTAGE.  This is ESPECIALLY TRUE FOR VIDEO GAMES, PLAYSTATIONS, etc. for all of it is attempting to DE-ACTIVATE these children, so that the planet will not be able to move forward and into the New Age.

Man, it would suck to go through life with jammed frequencies.  I want my frequencies to be all hangy-loosey, you know?  On the other hand, I tend to agree about television, but mostly from the standpoint that 99.8% of television content is blatantly idiotic.  So mostly what it seems to de-activate is people's critical thinking faculty.

Which, if you believe in "Sun Children," must not be that highly developed in the first place.

Anyhow, I'll leave you to check out what else she has to say.  And she does have a lot to say, most of it in all caps.  As for me, I'm wondering what the next incarnation of even more special children will be.  Maybe "Star Children."  Or hell, go big or go home, right?  "GALAXY Children."  Or if we go with the whole frequency thing, "Hypersonic Children."  I know the high-pitched whining ability of many little kids seems to bore a hole directly into my skull, so maybe that's the most accurate one of all.
Posted by Gordon Bonnet at 2:07 AM