In new developments in cryptozoology, today we consider: when Bigfoot wears clothes.

The reason this comes up is because of an article by the ever-entertaining Nick Redfern over at Mysterious Universe, which has the title "Further Accounts of Clothed Monsters."  My first reaction was, "Further?  I didn't know that was a thing in the first place."

But it turns out that this isn't the first time Redfern has considered the possibility, and he references an article he wrote a year and a half ago called "When Bigfoot Gets Stylish," which begins thusly:

Without doubt, one of the most bizarre aspects of the Bigfoot phenomenon is that relative to nothing less than clothed Bigfoot!  It’s one thing to encounter such a creature.  It’s quite another, however, to see it fashionably attired in pants and shirts...  Cryptozoologist Loren Coleman says: “In the 1960s and 1970s, reports from the American West would occasionally surface of hairy bipedal Bigfoot being seen with tattered plaid shirts and ragged shorts on their bodies.  In some research, there were intriguing attempts to relate these to files of paranormal encounters with sightings of upright entities said to be wearing ‘checkered shirts.’  (Within parapsychology, there is a subfield of study regarding ‘checkered shirted ghosts.’)  Investigators generally did not know what to make of these Sasquatch wearing plaid shirts, but dutifully catalogued and filed them away, nevertheless.”

I have three questions about this:
The more recent article, though, gives us some additional examples, such as a family in Colorado whose car was attacked by "a hairy man or hairy animal... (who) had on a blue-and-white checkered shirt and long pants," a woman in Barnstaple, England who saw a "large black dog... (that) walked on its hind legs... and was covered in a cloak and a monk's hood," and a woman in Kent, England who saw a "hulking figure... (who) had a loincloth around its waist and furred boots."

So that's kind of alarming.  Not that monsters are adopting clothes, but that given the choice, they're deciding to wear blue-and-white check, monk's hoods, loincloths, and furry boots.  I mean, it's not that I'm expecting them to wear Armani suits, but even by my own dubious standards of sartorial elegance, this seems a little odd. 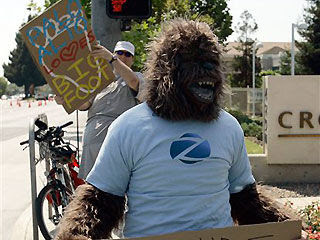 It also occurs to me, apropos of the plaid-wearing Bigfoots, that we might be talking about... people.  I say this from personal experience, given that my mom's family comes from the bayou country of southeastern Louisiana.  You know those folks on the This No Longer Has Anything To Do With History Channel, on the show Swamp People?  Yeah, those folks are all cousins of mine.  Seriously.  I have a photograph of my great-grandfather, along with his wife and ten children, wherein he could easily be mistaken for a Sasquatch in overalls.  I have heard from the older members of my family that he was a genuinely nice guy, but he certainly had the "hirsute" thing taken care of.

In any case, the whole thing throws us back into the realm of "the plural of anecdote is not data."  Unfortunately.  Because it adds a certain je ne sais quoi to the field of cryptozoology.  It's also nice to think that in a harsh winter, the Sasquatches have some woolens to keep themselves warm, when their pelts, loincloths, and cloaks aren't enough.
Posted by Gordon Bonnet at 2:14 AM