I'm always hesitant whenever I am considering posting something negative about alternative medicine.

I mean, sometimes it's clear.  I have no problem saying homeopathy is grade-A bullshit.  A meta-analysis of 1,800 studies intended to determine if there are positive effects from homeopathic "remedies" found no results -- as one would expect from a "medicine" that has been diluted past Avogadro's limit and which relies on nonsense like "frequencies" and "energetic imprints" to explain how it could work.

I always feel a little shakier when the target is naturopathy.  A great deal of what you hear from this branch of alternative medicine seems to me to rely on the naturalistic fallacy -- if it's natural, it must be good for you.  (And the converse, if it's artificial, it must be bad.) 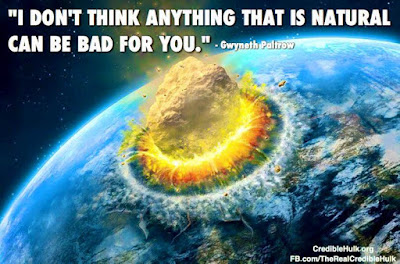 That said, there are a great many therapeutically useful medicines that do occur naturally.  Aspirin (acetylsalicylic acid) is found in willow bark, vincristine (used to treat Hodgkin's disease) in the sap of the Madagascar periwinkle, and an extract of the venom from the deadly cone snail shows great promise for treating intractable pain.

But to disabuse yourself of the notion that natural = good for you, look no further than the quack remedy "laetrile" made from apricot pits that supposedly destroyed cancerous tumors -- and which contained dangerous amounts of cyanide.

So I'm definitely of two minds regarding "natural medicine."  Just taking something because it's "natural" could have no effect on whatever's ailing you, or worse, might kill you.  But ignoring a potentially valuable substance because it comes from the annals of naturopathy is no better.

Of course, the good thing is that science has a way of evaluating claims of this type.  It's called a "controlled study" and it's the gold standard for testing this sort of thing.  Many naturopaths, however, claim that the game is rigged -- any substance that could be therapeutically useful that was not developed by the pharmaceuticals industry (or, in their lingo, "Big Pharma"), or which wouldn't make them lots of money, gets summarily ignored.

Myself, I've always thought that objection was a little dubious, given the fact that medical researchers have done 1,800 controlled clinical trials of freakin' homeopathy.  If they're willing to give something ridiculous like that close to two thousand tries to prove itself, it's hard to see why they'd balk at testing some potentially useful plant extract.

What I didn't realize, however, was that the naturopaths themselves have their own problems with dubious practice.  A long-time reader of Skeptophilia sent me a link a couple of days ago to an article in Vice about a former naturopath who has completely flipped her perspective -- and become a whistleblower for cases where naturopaths have used unapproved drugs, suggested useless therapies for ailments, and worst of all, conspired to cover up their own failures.

The article, "The Former Naturopath Who Became a Whistleblower on the Industry" by Kaleigh Rogers, is an interesting if disturbing read.  The naturopath in question, Britt Marie Hermes, was trained at Bastyr University, one of the best known naturopathic medicine teaching facilities.  She threw herself into it full-throttle -- until what she was seeing around her pulled her up short.

"It was world-crushing," Hermes said.  "I came to the conclusion that naturopathy is rife with unethical practices and undertrained professionals.  It was really hard to process...  I guess I have become a thorn in the profession's side."

Which highlights what I was saying earlier; we do have the means to test claims, it's just that the naturopaths often don't do that (or, as with homeopathy, don't believe the results even when we do).  It's a shame, because that means that any potential good discoveries -- the next generation of substances like vincristine -- gets lost under tons of confirmation bias and defensiveness.

It's why we need people like Britt Hermes.  It keeps us honest.  It keeps us from trusting our gut instead of peer-reviewed science.

But it does raise hackles.  I get more hate mail when I criticize alternative medicine than I do when I criticize young-earth creationism, and that's saying something.  People feel strongly about this, which is why Hermes herself is facing a defamation lawsuit by a German naturopath who took exception to her slamming dubious and poorly-tested "cures" (such as intravenous baking soda to treat cancer).  The bottom line is that we have a tried-and-true method for determining the efficacy of potential drugs.

It's better known as "science."

Or, as Tim Minchin put it, "There's a name for alternative medicine that works.  It's called... medicine."
Posted by Gordon Bonnet at 2:03 AM