A vote for fraud

Yesterday morning when I was reading the news, I saw a story that induced me to use say some very bad words, that for the benefit of my more sensitive readers I will leave to your imagination.

The story that generated that result appeared in The Guardian, and the gist is that disgraced British doctor and anti-vaxxer Andrew Wakefield is campaigning hard for an anti-vaxxer running for the Republican nomination for a seat in the Texas State House of Representatives.

Wakefield, you may remember, is the man who is virtually solely responsible for the completely unfounded claim that there is a link between vaccines and autism.  The British Medical Journal posted an editorial in 2011 that did not mince words; the title is, "Wakefield’s Article Linking MMR Vaccine and Autism Was Fraudulent."  If that's not unequivocal enough, the editorial begins with the line, "Clear evidence of falsification of data should now close the door on this damaging vaccine scare."

That should have been that.  That would have been that if it weren't for the fact that being caught red-handed engaging in scientific fraud didn't induce Wakefield to do what a normal human being would do in that situation, namely to admit what he'd done and retreat in disarray.  No, after the release of the paper calling him out on his fraudulent pseudo-research, Wakefield and his followers denied it -- and claimed that the doctors who wrote the paper were shills being paid by Big Pharma (which is up there with Monsanto as a stand-in for Satan) to shut down his research to protect their profits.

And the anti-vaxxer movement is still growing.  As is recurrence of dangerous and completely preventable diseases, such as the measles outbreak that happened in Wakefield's adopted home state of Texas this January.  But Wakefield evidently decided that this wasn't damage on a sufficiently large scale, so he's trying to ramrod his foolish and discredited ideas into the state legislature, so he can enshrine his false claims into law. 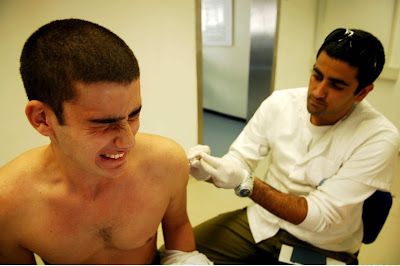 Wakefield is completely up front on what he's trying to do, and how he's trying to do it.  Rather than believe the scientists and the peer-reviewed studies, he says, you should trust social media instead:


Social media has evolved, as a general comment, has evolved beautifully.  It has provided an alternative to the failings of mainstream media...  In this country, it’s become so polarized now… No one knows quite what to believe.  So, people are turning increasingly to social media.

To say this makes me furious is something of an understatement.  Distrust of intellectuals in general and scientists in particular is widespread, and that is reflected in the people we've elected.  We already have a president who is a climate change denier and more than one governor and congressperson who believe that the six-day biblical creation story is supported by science and therefore should be taught in public school classrooms.  The last thing we need is more people in positions of power who deny science in favor of their own biases and/or delusions -- and who rely on getting their information from Facebook and Twitter.

Jinny Suh, an Austin mom and activist who is attempting to counter Wakefield's message, highlights how difficult this approach is to fight.  "The biggest challenge we face is," Suh said, "if you go onto Facebook or Google and you do a search for vaccines – and we can imagine a lot of new moms do this… the anti-vaxx stuff out there outnumbers the pro-vaxx stuff by quite a bit.  It doesn’t matter how you started out thinking about the topic, when a person is inundated with that much misinformation a person can’t help but start to think it’s true."

Which is why it's so important to get the message out there, and speak plainly.  Wakefield is a proven fraud.  He continues to lie about this and to claim that the evidence against him was falsified or cherry-picked or means something other than it does.  There is zero evidence that vaccination causes autism or any of the other horrible side-effects that he and others like him claim.  Admittedly, there have been side-effects from vaccines; no medical treatment is completely risk-free.  But they are extremely infrequent, usually mild, and temporary.

And what you get in exchange is immunity against diseases that as little as 75 years ago, used to kill huge numbers of children and young adults.  I've related before that my paternal grandfather's two eldest sisters -- Aimée-Marie and Anne-Désée -- died at the ages of 21 and 18, respectively, of complications from measles, after being completely healthy up until that time.

Wakefield is not just wrong, he's dangerous.  We do not need more anti-science voices amongst our leaders.  I don't know what the chances are for his candidate to win the nomination, but I fear that this kind of unfounded rhetoric has still not reached its peak.