Being fascinated with population genetics and human evolution, I was pretty excited to see that scientists have sequenced the DNA of "Cheddar Man," a 9,000-odd-year-old fossil human skeleton found in Cheddar Gorge, Somerset, England.  Cheddar Man, as the earliest human fossil from Britain, has been studied extensively, and it's been found that he was probably suffering from an infected wound on his head at the time he died -- but succumbed to a second injury before the infection could kill him.

Just last week, Ian Barnes of the British Natural History Museum released the results of the DNA analysis of Cheddar Man, and amongst the findings of his team were the fascinating results that he had genes coding for dark skin, curly hair, and blue eyes. 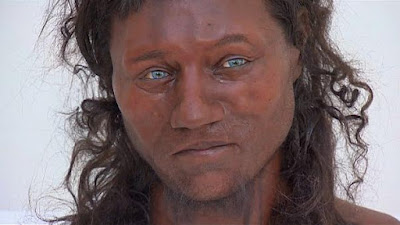 A reconstruction of Cheddar Man [image courtesy of the Wikimedia Commons]

The blue eyes were kind of a surprise to me, as blue eyes are a relatively new innovation.  Research has shown that all blue-eyed individuals descend from a single common ancestor in whom the mutation occurred, somewhere between six and ten thousand years ago.  This is why blue eyes are pretty well limited to people of European descent -- and brown-eyed people are a great deal more common, pretty much everywhere.

Despite the fact that we're talking about England, I wasn't surprised by the dark skin, as fair skin is also thought to be a fairly recent development.  It's connected with the presence of two mutated genes, SLC24A5 and SLC45A2, both of which first occurred around eight millennia ago, and which are presumed to have spread in northern latitudes because light skin confers an advantage with regards to vitamin D synthesis.  So it's not to be wondered at that an early human from 9,000 years ago would have dark skin.

I wish I could say I was wrong, but there was something of an explosion on social media when Barnes et al.'s results were announced.  I give you below a list as a sampler.  Grammar and spelling is as written, so I don't have to write "sic" five hundred times.
All of which made me want to weep softly and pound my head on the desk.

Sure!  Let's not listen to the "rubbish scientists' sprout!"  Let's give these nimrods the actual DNA data so they can "come to their own conclusions," because people who use "my grandad [sic] was white" as proof of a scientific claim are clearly capable of doing a detailed genetic analysis!  Otherwise people will listen to the vegans, and we'll start thinking Jesus was from the Middle East or something!

When I see stuff like this, my first reaction is, "How did we get here?  Aren't we better than this?"  Of course, I know that the great likelihood is that racism overall is far less now than it was even fifty years ago, but the idea that people could freak out to this extent over the fact that one of their ancestors has been shown to have dark skin just appalls me.  It bears mention that the concept of race has little genetic meaning; it's primarily a cultural, not a biological, phenomenon.  (Consider, for example, that a Khoisan and a Bantu, living right next door to each other in South Africa, are more distantly related to each other than a typical Japanese is to a typical Caucasian American -- even though most people would put the Khoisan and the Bantu in the same race -- "Black" -- and consider the Japanese and the Caucasian to be in separate races.)

But people who are committed to the whole concept of racial superiority (whichever race they've decided is superior) are going to have their fragile and counter-factual version of reality shaken by the fact that all humans go back to the same, fairly small, group of people who came out of Africa 60,000 years ago or so.  And they almost certainly had dark skin, brown eyes, and black hair.

If that bothers you, well, tough.  Science is under no compulsion either to comfort you or to reinforce your biases.  Or, as my grandma used to put it:  "You can wish all you like, but wishin' don't make it so."
Posted by Gordon Bonnet at 2:07 AM