One of the hardest things to get past is the natural tendency to accept something unquestioningly simply because it sounds like it should be true.

It's a special form of confirmation bias -- which is using scanty or questionable evidence to support a claim we already believed.  Here, it's more that we hear something, and think, "Okay, that sounds reasonable" -- and never stop to ask if the evidence supports it.

Or, actually, that the evidence presented is even correct.  I ran into an example of that a few days ago at the site Dr. Rich Swier.  It's a video by Warren Farrell, social activist and spokesperson for the "men's rights movement," in which he makes the contention that there is a single factor that unites all the school shooters -- growing up in a home without a father.


The single biggest problem that creates school shootings is fatherlessness.  Either minimal involvement with dads, or no involvement with dads.  This often comes after divorce, and the 51% of women over the age of thirty who are raising children without father involvement.  Sometimes it starts with fathers being involved, but after two years of not being married, 40% of fathers drop out completely.  That combination accounts for 100% of school shooters.  Adam Lanza, Stephen Paddock, Nikolas Cruz, Dylan Roof.  They're all dad-deprived boys.  We don't see this among girls; we don't see this among dad-involved boys.  The solution is father involvement.  We can start that in school.  We can start that with fathers being involved in PTAs.  Changing the culture, letting men know that the most important single thing they can do in their life is not to be a warrior, outside in the killing fields, but to be a father-warrior.  Be involved not just in PTAs but in Cub Scouts and Boy Scouts, coaching, in giving up high-paying jobs to spend more time with your children.

Sounds perfectly reasonable, doesn't it?  Moreover, it's hard to think of a reason why we wouldn't want fathers to spend more positive interactive time with their children.  So it's easy just to say, "Oh, okay, that makes sense," and not to question the underlying claim.

Because it turns out that what he's saying -- school shooters are created by fatherless homes -- is simply untrue.  The contention seems to have originated with a Fox News story, and the whole thing took off, despite its simply being factually incorrect. 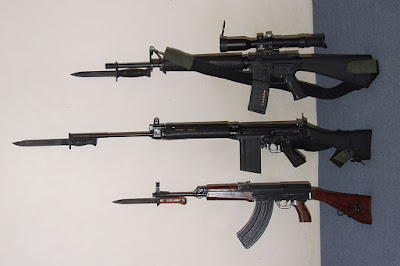 [image is in the Public Domain]

Now, mind you, there are cases of mass shooters who grew up in dysfunctional, fatherless homes.  Stephen Paddock, the Las Vegas shooter, was the son of a bank robber who spent most of his son's childhood in prison.  The father of Nikolas Cruz, the Parkland school shooter, died when his son was five, and he was left with a mother who apparently was abusive, and eventually he was farmed out to relatives and friends.  Dylann Roof, the Charleston church shooter, was the product of divorce, and his father was allegedly physically abusive not only to his son but to his second wife.

But consider some of the others.  Adam Lanza, the Newtown school shooter, was the child of a couple who divorced when he was in fifth grade, but his father remained involved.  When Lanza's anxiety and apparent obsessive-compulsive disorder made it impossible for him to attend high school, he was taken out and jointly homeschool by his mother and father.  Seung-Hui Cho, who killed 32 people at Virginia Polytechnic Institute in 2007, was the son of a pair of hard-working Korean immigrants who were "strong Christians" and had sought help for their son, who had shown signs of sociopathy and withdrawal all the way back in first grade.   Omar Mateen, who killed 49 people at the Pulse Nightclub in Orlando, Florida, was not the product of divorce, and if anything, his father sounds more stable than his mother.  Neither Eric Harris nor Dylan Klebold, the Columbine High School shooters, were the products of broken families, or even dysfunctional ones; nothing I could find (and there are thousands of sites out there dedicated to the tragedy) indicated that either boy grew up in anything but a perfectly ordinary upper middle class home.

So it's not sufficient to say, "Okay, that seems reasonable."  If you have a claim, it better be supported by all the evidence, or it's time to look elsewhere.  I'm certain that the awful home situations of Paddock, Cruz, and Roof contributed to their anger and eventual violent attacks; but clearly this isn't (as Farrell claims) proof that "the cause of mass shootings is fatherlessness," and his contention that 100% of mass shooters were functionally fatherless is simply wrong.

Once again, the situation is that we need to question our own biases.  The cause of mass murders in our society is multifaceted, and admits no easy solution: bullying and the resultant sense of powerlessness that engenders, the difficulty of obtaining consistent mental health services, poverty, child abuse, split families, radicalization/racism/fascist rhetoric, the easy availability of guns, and the culture of glorifying violence undoubtedly all play a role.

Certainly, we should all commit ourselves to doing what we can to remedy any of those problems; but claiming that one of them is responsible for a complex issue is facile thinking.  And as tempting as it is, such oversimplification never leads to a real solution.
Posted by Gordon Bonnet at 1:59 AM