Put down the ducky

Yesterday, we looked at the fact that scientists have actually not admitted that vaccines cause autism.  Today, we consider the fact that your child's rubber duck is not going to kill them, either.

You'd think this would be unnecessary, but in this time of fearmongering and sensationalism, no claim is too outlandish to gain traction as long as it plays on someone's anxiety.  In this case, the whole thing started with a paper in Nature called, "Ugly Ducklings—The Dark Side of Plastic Materials in Contact With Potable Water," by Lisa Neu, Carola Bänziger, Caitlin R. Proctor, Ya Zhang, Wen-Tso Liu, and Frederik Hammes, which found that after several uses, plastic bath toys were covered with bacteria (including fecal coliform bacteria) and various species of fungi.

When I read the paper, my general response was, *yawn*.  Of course bath toys are covered with bacteria.  Everything is.  Add to that the fact that (1) bath water is warm, (2) tubs are generally not spotless to start with, and (3) the bath-taker is immersing his or her naked body into the water with the purpose of washing dirt off, it's no wonder bath water is a soup of various bacteria.

Even fecal coliforms.  Because, I hope, we all periodically wash our butts, too.

But there were people who stumbled on this paper, with its alarming-sounding title (which, as scientific researchers, Neu et al. should have known better than to give it), and immediately interpreted the study as implying that rubber duckies posed a deadly danger to children.  Bacteria!  Oh no!  Must immediately throw away all bath toys! 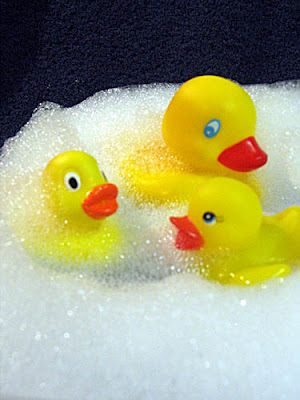 Even in a healthy human, the number of bacterial cells in or on you exceeds the number of human cells you have.  You read that right; a study way back in 1977 estimated about 39 trillion bacterial cells in or on a typical human, significantly outnumbering the 30 trillion human cells you have (84% of which are red blood cells).  More to the point, the vast majority of these bacteria are either neutral or actively helpful; disturbances in the "intestinal flora" are thought to have roles in such horrible diseases as Crohn's disease, peptic ulcers, CDiff (Clostridium difficile) infection, and ulcerative colitis.  (Which is why there is a promising therapy to treat those using -- I kid you not -- fecal transplants from a healthy individual, to reestablish the right intestinal flora.)

So if your rubber ducky is coated with bacteria, the fact is, so are you.  And most of us are still healthy most of the time.

But that logic evidently wasn't sufficient; there have been various alarming articles on "alternative-medicine" and "natural parenting" sites claiming that not only were bath toys deadly, but there was a systematic coverup of the research, presumably sponsored by Big Ducky.

The whole thing was debunked roundly by Alex Berezow over at the website of the American Council on Science and Health last week.  Berezow went even further with regards to the Neu et al. study; he claimed that they were actively seeking an alarmist reaction for the purposes of publicity:


Amazingly, the authors cite mommy blogs and the sensationalist book Slow Death by Rubber Duck: The Secret Danger of Everyday Things in their paper.  The book is about the dangerous "chemicals" that are poisoning everybody, a chemophobic tactic that we've debunked over and over again.

Quite honestly, I don't think I've ever seen anything like this in my professional career. Serious scientists don't cite mommy blogs and sensationalist popular science books in peer-reviewed journal papers.

The authors had a clear strategy in mind: (1) Do a study on a common household object; (2) Produce boring data that doesn't surprise any microbiologist; (3) Write a provocative, fearmongering headline; (4) Market it to a gullible, clickbait-hungry press (like the New York Times), who would repeat their claims without any criticism or critical thinking; and (5) Watch the media interview requests and grant dollars come rolling in.

Mission accomplished.  The deceitful manipulation of the press for their own professional benefit would be a thing of fascination if it wasn't so utterly disgusting.

And I have to admit he's got a point.

Of course, the craziest thing about the Natural Organic Health people who started running around in circles flailing their arms and making alarmed little squeaking noises after reading the study is that they apparently never thought of the simplest expedient for dealing with the situation if you're worried: wash the fucking toys.  I mean, seriously.  If you think there are nasty bacteria on the rubber duck, scrub it with a little soap and water after your kid's done in the bath.  Or, if you really want to go crazy, wipe it off with some rubbing alcohol.

Voilà.  If not no bacteria -- there nothing that could do that, short of an autoclave, which would turn your bath toys into a puddle of brightly-colored melted plastic -- at least there'll be fewer.

All of this goes to show that if there's nothing to be scared of, people will find something.  Added to the problem that (if Berezow is right about Neu et al. being guilty of deliberate sensationalization) fearmongering sells.  So if you like playing with a rubber ducky in the tub, have at it.  I hear you have to put it down if you want to play the saxophone, but other than that, it's perfectly safe.