Smile, and the world smiles with you

In the menagerie of weird creatures from urban legends we have such entities as the Men in Black, Slender Man, the Black-Eyed Children, not to mention older creatures of the night such as the Evil Serial Killer With A Hook For A Hand that has been scaring the absolute shit out of kids around campfires for generations.

I just ran into a new member of the zoo yesterday, thanks to crypto-maven Nick Redfern over at Mysterious Universe.  Called "Grinning Man," he's a tall guy in an old-fashioned suit and fedora, with a creepy smile on his face.  His skin is supposedly "plastic-like," so believers think he's only masquerading as a human.  Redfern says he's an operative of the Men in Black; me, I'm thinking more of The Gentlemen from Buffy the Vampire Slayer: 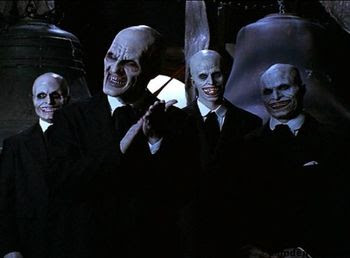 But Grinning Man isn't followed around by guys with long, flailing arms who rip your ribcage open and steal your heart.  Apparently, Grinning Man just kind of stands there... grinning.  Thus the name. Redfern tells the tale of a California family who saw a UFO while out driving, and the following day had a visitor.  He writes:


It was while one of the teenage children was sat [sic] on the porch and playing music that she caught sight of a man on the other side of the road.  He was dressed completely in black, aside from a white shirt.  He even wore black gloves, on what was a bright, summer day.  The girl was particularly disturbed by the fact that the man sported a weird grin and was staring right at her.  So unsettled was she that she went back into the home and told her father of what had just happened.  He quickly went to the door but – no surprise – the smiling MIB was gone.

John Keel, of "Mothman" fame, describes another encounter, this one near Point Pleasant, West Virginia (home of the original Mothman story):


[A] sewing machine salesman claims to have been stopped on a highway by a strange looking automobile.  A man appeared from a hatch on the side of the vehicle, and a tall, bald man wearing a blue metallic suit approached the man.  He could see the "man" had "slightly elongated" eyes and a demented grin that could be seen glinting in the cars headlights.  The grinning man identified himself as Indrid Cold, and the two had a bizarre telepathic conversation before the entity left, saying they would see each other again. 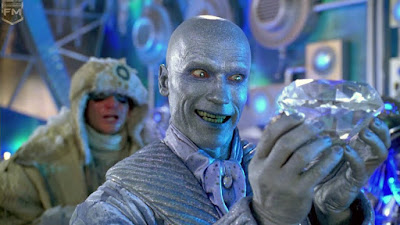 Now that I think of it, the resemblance is pretty striking.

But unlike Mr. Freeze, "Indrid Cold" was a true alien, Keel said:


The salesman, Woodrow Derenberger, would go on to claim that Indrid Cold would visit him, and would reveal that he was an alien from a planet called Lanulos, situated in another galaxy.  Derenberger claimed to have visited Cold on his homeworld, and met many other beings like Indrid Cold in his travels.  He would write a book about his experiences, but would lose his job, his wife and some say his sanity in the years after, dying in 1990, some saying his obsession with his grinning friend cost him his life.

So that's kind of unfortunate.

Once again, we have the common thread that Grinning Man doesn't seem to do anything.  He doesn't freeze people, he doesn't abduct their children (like Slender Man), he doesn't threaten to kill them if they talk to the authorities (like the Men in Black), etc.  So as extraterrestrial villains go, he's pretty lame, although I have to say in all honesty that if I looked out of my window at night and saw a creepy, pasty-faced guy in a fedora grinning back at me, I'd probably have an aneurysm, so I guess that counts for something, evil-wise.

Anyhow, that's latest member of the Pantheon of Creepiness.  As I've mentioned before, it's kind of amazing that given how long I've been writing Skeptophilia (seven years as of last November), I still run into weird beliefs I'd never heard of before.  I still think for pure terror, you can't beat the Black-eyed Children, which is why I'm writing a trilogy of novels based on the legend (the first, Lines of Sight, is coming out in 2019).

But maybe I'm thinking about this wrong.  Maybe Grinning Man is grinning because he is planning something he hasn't carried out yet.  If so, he'd better get at it, because Derenberger's encounter with "Indrid Cold" happened back in the 1960s.  If he wants people to keep being scared of him, he probably should wipe the silly smile off his face and get on with it.
Posted by Gordon Bonnet at 4:15 AM