In today's science news, we have a paper called "Rapid Genetic and Developmental Morphological Changes from Extreme Celerity," from the American Research Journal of Biosciences, by Lewis Zimmerman et al., which describes some unexpected consequences to living beings who are accelerated rapidly.

Turns out that the results are nothing short of terrifying.  Traveling at extreme accelerations and velocities triggers a parallel acceleration in mutations within the test subjects' DNA.  In other words, evolution speeds up, with a resulting change in their physical forms.  If they then reproduce (which they did), their offspring maintain those altered traits, and end up looking nothing like the original organisms did.

I hope by this point you're saying, "Hang on a moment..."  Some of my fellow Trekkies might be adding, "Wasn't that the plot of the Star Trek Voyager episode 'Threshold,' wherein Captain Janeway and Tom Paris are exposed to "transwarp" speeds (higher than Warp 10), and mutate into slimy-looking half-human/half-tadpoles, proceed to have some hot sex that I don't even want to think about, and generate several very skeevy looking babies?  Which they decide to abandon on a jungle planet after an 'antiproton beam' returns their DNA (and their bodies) to human form, instead of doing what an antiproton beam would actually do, namely making them explode in a burst of gamma rays?"

If that's what you said, you're exactly correct, and that resemblance is no coincidence.  Zimmerman wrote up his scholarly paper based on the plot of the Voyager episode, listing himself and six Starfleet officers as the authors, and submitted it to ten journals that had the reputation of being "predatory" -- i.e., pay-to-play.  It was rejected six times, but four journals accepted it, and one -- the aforementioned American Research Journal of Biosciences -- actually published it.

I bring all this up for two reasons.

First, in the current atmosphere of distrust by laypeople of scientists and science in general, we seriously don't need this.  Given that we have a president and a significant slice of his administration who doubt the existence of climate change (although I'm fully aware that there's a money motive for this disbelief, further confounding matters), the last thing we want is some journal whose editorial board -- if it even exists -- accepting bullshit articles that are recycled plots from Star Trek. 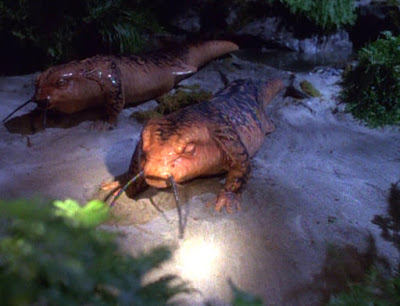 Second, this is a bit of a caveat to anyone who is her/himself engaged in academic pursuits to be very, very careful of source reliability.  It used to be, back in the Middle Ages when I was in graduate school, that all you had to do was make sure that the journal you were referencing looked as if it were requiring things like peer review and explicit publication of conflicts of interest.  Later on, as long as the website address said ".edu" or ".org," they probably were okay.

Now?  Just having a fancy name like "American Research Journal of Biosciences" is no guarantee of reliability.  You can't just download a pdf of an academic paper, give a quick look to its source listings and citations, and assume it's reasonably valid.  Because what Zimmerman's little prank shows is that predatory journals don't give a rat's ass what they publish, as long as the authors are willing to pay for the privilege.  And the vast majority of them aren't going to be blitheringly obvious fakes like the "Extreme Celerity" paper was.  Most of them are likely to be papers that were rejected during peer review for things like design flaws, inappropriate controls, or more subtle problems such as "p-hacking" -- things you might not notice at a quick read.

It's sad, but the problem isn't going away.  As soon as there's a lucrative market for something like pay-to-play academic publishing, it's going to continue to churn out trash.  What Zimmerman's paper shows is that you can't simply assume that if something's in a journal, it made it through peer review.  The truth is that there are hundreds of predatory journals out there, and it's incumbent upon anyone using scientific research, or even reading it, to make certain what you're looking at has been through a rigorous vetting process before reaching print.

Kind of a shame, really, and not just from the standpoint of muddying the waters of scientific research.  I've been hoping for faster-than-light travel ever since I was a kid watching Lost in Space.  Hell, I'd take Warp 1, much less Warp 10.  I'm not eager to be turned into a slimy tadpole creature, but if I could visit other star systems, it's a risk I'm willing to take.  And after all, if I do get mutated, I can always rely on a handy beam of antiprotons to bring me back to my original form.
Posted by Gordon Bonnet at 3:31 AM