The turning of the tides

It's tempting to think that conditions on Earth have always been like they are now.

On one level, we know they weren't.  When people picture the time of the dinosaurs, it usually comes along with images of swamps and ferns and rain forests.  (And volcanoes.  Most of the kids' books about dinosaurs illustrate them as living near erupting volcanoes, which seems like a poor choice of habitat.)

But the basics -- the air, water, soil, and so on -- we picture as static.  It's been the basis of hundreds of science fiction stories; people go back into the distant past, and although there are (depending on when exactly they went to) often giant animals who want to eat you, you have no problem breathing or finding food.

I had a neat hole punched in that perception last week when I read Peter D. Ward's book Out of Thin Air.

Ward is a paleontologist at the University of Washington, and his contention -- which is well-argued and supported by a wealth of evidence -- is that the oxygen content of the atmosphere has varied.  A lot.  It's at about 21% at sea level now, but hit a staggering low of 13% immediately after the Permian-Triassic extinction, comparable on today's Earth to being at an altitude of 12,500 feet (think the High Andes).  Humans time-traveling back then would have a seriously difficult time breathing, and life was probably confined to areas that were near sea level -- and those areas would be completely isolated from each other by higher ground in between where there was not enough oxygen to survive.

There were times when it was much higher, too.  Ward says in the late Carboniferous Era, the oxygen content suddenly spiked to around 30%, which explains why coal formation stopped; at 30% oxygen, dead plant matter will combust with little encouragement, resulting in little left behind to form coal seams.

If you'd like to find out more, I highly recommend Ward's book, which is not only an argument for the fluctuating-atmosphere model, but is a good overview of the major events in Earth's history. 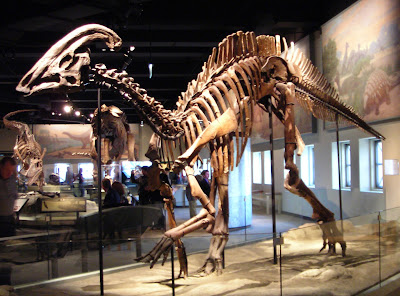 I had another blow delivered to the static-Earth perception from a study that was published last week in Geophysical Research Letters, called "Is There a Tectonically Driven Super‐Tidal Cycle?", by Mattias Green, J. L. Molloy, H. S. Davies, and J. C. Duarte, which considered the possibility that even the tides haven't always been as they are today.

What their study did was to look at a model of the dispersal of tidal energy, and they found that when all the continents were joined into a single land mass (Pangaea), which last happened at the end of the Permian Era a little over 250 million years ago, it represented a tidal energy minimum.  This meant that the tides were smaller than today, and that the majority of the (single) ocean was effectively a stagnant pool of water, with little vertical mixing of nutrients.  Stagnant, low-nutrient, low-oxygen water generally has little biodiversity -- a few species that can tolerate such conditions do exceptionally well, but the rest die out.  So this could be yet another reason that the cataclysmic Permian-Triassic Extinction happened, in which (by some estimates) 90% of the species on Earth became extinct.

What the Green et al. study suggests is that we're near a tidal maximum.  As the press release about the study put it:


In the new study, scientists simulated the movement of Earth’s tectonic plates and changes in the resonance of ocean basins over millions of years.

The new research suggests the Atlantic Ocean is currently resonant, causing the ocean’s tides to approach maximum energy levels.  Over the next 50 million years, tides in the North Atlantic and Pacific oceans will come closer to resonance and grow stronger.  In that time, Asia will split, creating a new ocean basin...

In 100 million years, the Indian Ocean, Pacific Ocean and a newly formed Pan-Asian Ocean will see higher resonance and stronger tides as well.  Australia will move north to join the lower half of Asia, as all the continents slowly begin to coalesce into a single landmass in the northern hemisphere...

It's a little humbling to think about, isn't it?  The processes that shape the continents, drive the tides, control the chemistry of the atmosphere, will keep chugging along long after we're a paleontological footnote in the textbooks of our far distant descendants.  It's not that what we're doing now isn't critical; in the short term, the out-of-control fossil fuel burning is doing things to our atmosphere that will certainly cause us grievous harm, not to mention the short-sighted pollution of the very resources we depend on.

But if we do succeed in wiping ourselves out, which lately has seemed increasingly likely, the processes that govern the Earth will keep on going without us.  So will natural selection; the survivors of the current mass extinction will evolve into other "forms most beautiful and most wonderful," as Darwin put it in The Origin of Species.

Not that this will be much consolation to us, of course.  But I do find it comforting, in a strange way.  However important we think we are, on the scale of the natural world, we're pretty tiny.  Whatever damage we do, eventually the Earth will recover, with or without us.  And the atmospheric, geological, and tidal ups and downs will continue -- world without end, amen.
Posted by Gordon Bonnet at 3:06 AM