The question "why are we here?" has vexed scientists and philosophers alike.

The philosophical answers to this are beyond the purview of this blog, and, frankly, beyond my expertise.  I've got a decent background in a lot of areas -- one of the unforeseen benefits of changing one's major over and over -- but philosophy is a subject on which I am unqualified to weigh in.

The scientific twist on this question, however, is equally thorny.  Why is there something rather than nothing?  The current model of the Big Bang Theory predicts with considerable certainty that when the universe formed, there should have been equal amounts of matter and antimatter.  The two are (in a physics sense) symmetrical; every property that matter has, with the exception of mass, antimatter has the opposite.  Positrons (anti-electrons) are positively charges; anti-protons are negative.

The rub is that if you look around the universe, you don't see antimatter.  At all.  Which is, on one level, unsurprising; when matter and antimatter meet, the result is mutual annihilation (and the release of tremendous energy, as per E = mc^2), as any aficionado of Star Trek knows.

In another way, however, this is puzzling.  If matter and antimatter were created in equal amounts during the Big Bang, in the intervening years it should all have mutually annihilated, leaving behind nothing but gamma rays.  If the symmetrical production of matter and antimatter is correct, then our universe should be devoid of anything but energy -- and we wouldn't be here to consider the question. 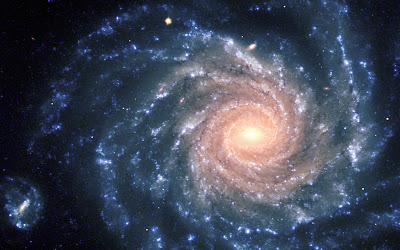 So physicists have been refining their techniques to study antimatter, to see if there's something to account for the imbalance.  Just three days ago, a paper appeared in the journal Nature, by Mostafa Ahmadi of the University of Liverpool et al., called, "Characterization of the 1S-2S Transition in Antihydrogen," in which the team created molecules of antihydrogen -- made of an antiproton and a positron -- to see if it exhibited different properties than ordinary hydrogen.  They did this by creating 90,000 antiprotons, mixing them with five million positrons, and allowing them to form atoms -- then trapping a small number of these in a "magnetic bottle."  (Remember that antimatter violently explodes if it comes into contact with ordinary matter.)

The outcome: antihydrogen seems to behave exactly like ordinary hydrogen.  It emits the same spectral lines (the particular property Ahmadi et al. were studying).  As Aylin Woodward wrote in LiveScience:


As expected, hydrogen and antihydrogen ­— matter and antimatter — behave identically. Now, we just know that they're identical at a measurement of parts per trillion.  However, [coauthor Stefan] Ulmer said the 2-parts-per-trillion measurement does not rule out the possibility that something is deviating between the two types of matter at an even greater level of precision that has thus far defied measurement.

As for [coauthor Jeffrey] Hangst, he's less concerned with answering the question of why our universe of matter exists as it does without antimatter — what he calls "the elephant in the room."  Instead, he and his group want to focus on making even more precise measurements, and exploring how antimatter reacts with gravity.

The results of this study don't rule out one possibility -- which is that some distant galaxies may actually be composed of antimatter.  As the Ahmadi et al. study shows, it's increasingly unlikely we'd be able to tell that from a distance.  The spectral lines of antihydrogen in an "antisun" would look the same as those of hydrogen from an ordinary star, so there'd be no way to tell unless you went there (which would be unfortunate for you, because you'd explode in a burst of gamma rays).

Whether such an antimatter galaxy would have all of the same people in it, only the good guys would be evil and would have beards, is a matter of conjecture. 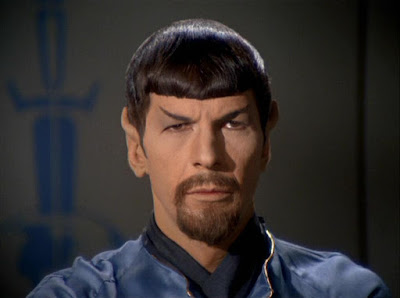 But if, as many scientists believe, there really is an imbalance between the amount of matter and antimatter -- if unequal amounts were created during the Big Bang, so during the mutual annihilation that followed, some ordinary matter was left over -- it points to some physics that we haven't even begun to understand.

Which is pretty exciting.  As I pointed out in yesterday's post, unanswered questions are the bread-and-butter of scientific research.  The team is hoping to have even more precise measurements made by the end of 2018, at which point CERN is shutting down for two years for upgrades.  As Jeffrey Hangst put it, "We have other tricks up our sleeve.  Stay tuned."

Which even Evil Spock would have approved of, I think.
Posted by Gordon Bonnet at 3:06 AM