There's a logical fallacy called the Argument from Personal Incredulity.  The idea here is that you look at something from nature, and find it extraordinary -- beautiful, weird, complex, intricate, or merely bizarre.  Faced with this strange and wonderful thing, you respond, "I can't imagine how this could have come about naturally.  Therefore, it has to be the work of ______."  (Fill in the blank with your favorite deus ex machina, be it gods, aliens, or some other superintelligent power.)

This approach also gets you into some deep philosophical waters when the extraordinary trait of the example in question is beauty.  You hear people say that gorgeous sunsets or fields of flowers in bloom or whatever are evidence for god's hand in nature, but it conveniently glosses over all the natural things that aren't so nice.  If bunnies and butterflies are god's work, then so are ticks and tapeworms, you know?  Eric Idle pointed this out in his wonderful parody of the hymn "All Things Bright and Beautiful," "All Things Dull and Ugly" -- pointing out that "the Lord God made the lot."

I ran into an example of this -- in a scientific journal, no less -- yesterday, with the paper "Cause of Cambrian Explosion -- Terrestrial or Cosmic?" in the journal Progress in Biophysics and Molecular Biology.  Written by a team of nineteen scientists, it looks at the remarkable expansion of biodiversity that occurred at the beginning of the Cambrian Era, but also considers an evolutionary conundrum -- how the octopus and other cephalopods ended up so much more intelligent than their mollusk relatives.  I'll cut to the chase and tell you their conclusion:


In our view the totality of the multifactorial data and critical analyses assembled by Fred Hoyle, Chandra Wickramasinghe and their many colleagues since the 1960s leads to a very plausible conclusion – life may have been seeded here on Earth by life-bearing comets as soon as conditions on Earth allowed it to flourish (about or just before 4.1 Billion years ago); and living organisms such as space-resistant and space-hardy bacteria, viruses, more complex eukaryotic cells, fertilised ova and seeds have been continuously delivered ever since to Earth so being one important driver of further terrestrial evolution which has resulted in considerable genetic diversity and which has led to the emergence of mankind.

Hoyle and Wickramasinghe are not an auspicious way to start.  They're both associated with the idea of panspermia, that life on Earth was seeded here from outer space, and they don't seem particularly concerned with the fact that there are other, more plausible explanations.  Wickramasinghe especially is associated with a lot of fringe-y claims, such as that the Archaeopteryx type fossil is a forgery and that the virus that caused the 1918-1919 Spanish flu epidemic was extraterrestrial in origin.  He testified for the defense in the 1981 creationism trial in Arkansas, making statements about the "Intelligent Design" model that his colleagues called "absurd" and "ignorant."  (In fact, in papers that mention Wickramasinghe, the phrase most often associated with his name is "his claims have been completely rejected by the scientific community.")

Of course, for some people, being rejected by the establishment is a sign of being brilliant, a maverick, someone whose ideas are ahead of their time.  Their sticking to their guns turns their claims into something of a crusade.  Fewer people, it seems, conclude that the renegade in question is simply wrong.

Which is how we now have a paper in support of Wickramasinghe and Hoyle -- saying, basically, that we have found the extraterrestrials, and they are us.

The part of the paper that addresses viruses is at least looking at a problem for which the standard model has no particularly good explanation.  Viruses are odd beasts, obligate parasites that hijack a host cell and use their cellular machinery to make more copies of themselves.  Some, the retroviruses (HIV being the best-known example) actually insert a bit of their genetic material into the host's cells, rendering infection more or less permanent.  (We have dozens, possibly hundreds, of retroviral remnants in our own DNA, and they have been implicated in a variety of diseases including multiple sclerosis and schizophrenia.)

But then they start talking about octopuses, and leap right off the logical cliff:


[T]he genetic divergence of Octopus from its ancestral coleoid sub-class is very great, akin to the extreme features seen across many genera and species noted in Eldridge-Gould punctuated equilibria patterns (below).  Its large brain and sophisticated nervous system, camera-like eyes, flexible bodies, instantaneous camouflage via the ability to switch colour and shape are just a few of the striking features that appear suddenly on the evolutionary scene.  The transformative genes leading from the consensus ancestral Nautilus (e.g. Nautilus pompilius) to the common Cuttlefish (Sepia officinalis) to Squid (Loligo vulgaris) to the common Octopus (Octopus vulgaris) are not easily to be found in any pre-existing life form – it is plausible then to suggest they seem to be borrowed from a far distant “future” in terms of terrestrial evolution, or more realistically from the cosmos at large.  Such an extraterrestrial origin as an explanation of emergence of course runs counter to the prevailing dominant paradigm.

The last bit, at least, is undeniable.  They go on to add:


One plausible explanation, in our view, is that the new genes [i.e., differences between the octopus genome and that of their nearest relatives] are likely new extraterrestrial imports to Earth - most plausibly as an already coherent group of functioning genes within (say) cryopreserved and matrix protected fertilized Octopus eggs.

Thus the possibility that cryopreserved Squid and/or Octopus eggs, arrived in icy bolides several hundred million years ago should not be discounted as that would be a parsimonious cosmic explanation for the Octopus' sudden emergence on Earth ca. 270 million years ago.

The problem here is that their entire argument rests on two things: (1) the lack of a good fossil record of the octopus; and (2) their amazing intelligence.  So we're adding the Argument from Ignorance ("I don't know the explanation, so it must be ____") to the Argument from Personal Incredulity ("It's pretty cool, so it must be ____") to the paucity of the fossil record (not only for octopuses, but for most life forms) and concluding that the octopus came to Earth via frozen eggs from outer space. 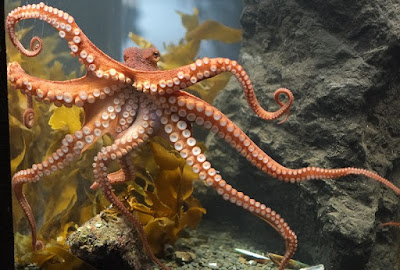 There's also a serious scientific stumbling block about all this, and it's one the authors don't address.  It's the same problem faced by claims of human/alien hybridization; if life did evolve on other worlds, there is no reason in the world that it would necessarily encode its genetic information the same way we do.  Something like DNA or RNA is probably fairly likely; the nucleotides (building blocks) of these molecules are relatively easy to synthesize, and RNA has the unusual characteristic of being autocatalytic (it can catalyze its own chemical reactions).  But the DNA code chart -- the master recipe book by which our genetic material is decoded, and directs all of our cellular processes -- appears to be entirely arbitrary.

And yet... it is shared by all life forms on Earth.  Including the octopus.  Good evidence that we all came from a common ancestor -- and a tough thing to overcome if you think that some terrestrial life forms came from elsewhere in the galaxy.

So if we have scant evidence for something, we don't engage in wild speculation -- we look for more evidence.  You can't base a valid conclusion either on ignorance or awe.  And to cherry-pick a few odd examples of creatures the Darwinian model hasn't fully explained, and use them to support your claim that life's evolutionary drivers came from outer space, is nothing more than fancily-worded confirmation bias.