If you're wondering why the world seems to have lost its collective marbles lately, we now have an answer:

The Reptilians who control all of the governments in the world have realized that we're on to them, and they're trying to start World War III.

At least that's the contention of YouTube user "2CirclesArchive," who posted a video a couple of days ago that should win some kind of award for complete batshit lunacy.  In case you don't want to jeopardize valuable cells in your prefrontal cortex watching the thing, here are a few salient quotes:


The Reptilian parasites know that humanity is waking up to their existence and presence. That’s why the need the Third World War as a distraction.  That’s the sole reason for this irrational conflict.

Which of the many irrational conflicts are we talking about, here?  Because in the last few months, we seem to be having global-scale irrational conflicts on nearly a daily basis.  And I'm not entirely sure how starting a world war helps out the Reptilian parasites' goal of remaining undercover.  You'd think that'd kind of seal the deal, actually.


It’s Reptilians versus humans – not humans versus humans.  Not the West versus Russia...  Putin had been part of a group advised by reptiles.  Nordics made the counter offer to Putin.  The technology the Nordics are giving to Putin is on par with America.  The Nordics have told Putin he no longer has to toe the American line, hence his resistance.

The "Nordics" doesn't refer to Scandinavian people, here.  They're a race of sexy blond aliens, kind of like Liam Hemsworth only with superpowers.  So apparently the Nordics and the Reptilians are playing some kind of chess game with Putin as one of the pawns.  And since "2CirclesArchive" claims that the focal point of the unrest is going to be in the Ukraine, I suppose it makes some kind of bizarre sense that Putin would be involved.

Then we're told that at least one other human besides "2CirclesArchive" has figured it out.  This person is Simon Parkes, former councilor in Whitby, North Yorkshire, England.  Parkes has appeared in Skeptophilia before because of his claims that (1) his mother was a nine-foot-tall green alien with eight fingers on each hand, and (2) he's been abducted by an alien he calls "the Cat Queen," who screwed him silly and proceeded to give birth to a half-alien, half-human child named "Zarka."

So I think we can safely conclude that Parkes is a few fries short of a Happy Meal.  Nevertheless, "2CirclesArchive" thinks he is a credible witness, and finds it completely plausible that he has interacted with "aliens, shadow people, elementals and UFOs... Mantid (Mantis) beings, Draconis Reptilian, Feline, small and tall Grey creatures, Crystalline beings and other creatures that can’t be identified." 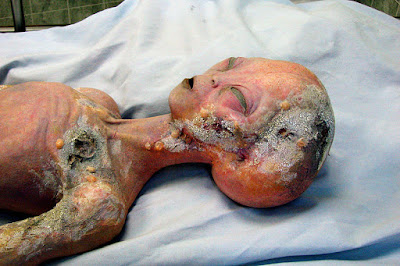 Okay, what do we do about all this?  "2CirclesArchive" has some advice:


Pass it on and tell everyone.  The internet is controlled.  Call people in Ukraine randomly.  Google for a phonebook of Ukraine and call people and businesses and tell them all politicians are Reptilians.  They want the Third World War.  Search on the internet.  I love you.  Hurry, time is running out.

So because the internet is controlled, we're supposed to... search on the internet?  And then... just call random people in Ukraine?

There's also the problem of the fact that even if I was inclined to do this, which I'm not, I don't speak Ukrainian.  I mean, anyone can look up how to say "All politicians are Reptilians" using Google Translate ("Vsi polityky ye reptiliyi"), but I should warn you that Google Translate isn't all that accurate.  Every year I have to advise my Latin and Greek students not to attempt cheating on their assignments by loading them into Google Translate, because what comes out is an often-hilarious hash.  As an example, take the simple and rather well-known quote from Petrarch, "Nihil sapientiae odiosius acumine nimio" ("There is nothing as hateful to wisdom as too much cleverness").  Here's what Google Translate did with it:


There is nothing more offensive to that wisdom of the sharpness of the excessive.

So I'm not sure you should be all that confident of my translation into Ukrainian.  You might be better off hiring an actual Ukrainian person, although you'd have to choose carefully, or they'd just tell you, "ty absolyutno bozhevilʹna" ("you are absolutely insane," at least if you believe Google Translate).

Other than that, I'm not sure what to do.  I mean, I've done my part in passing the message along, but I'm not sure I'm going to push it much further.  I'm only willing to stretch the patience of my readers so far.  Beyond that, I think we'll have to take our chances with the Reptilians, shadow people, Mantids, and Liam Hemsworth.