For sale: One castle. Three bedrooms, three bathrooms, one ghost.

I've said for ages that I would love to spend a night in a haunted house.

I would prefer not to spend said night alone, because I may be a skeptic, but I'm also (1) highly suggestible and (2) a great big coward.  I'd like to think that my generally rational view of the world would inoculate me against jumping to conclusions in scary situations, but the reality is that I adopted skepticism as a worldview largely because the other option was letting my anxiety drive me completely batshit crazy.

Anyhow, this all comes up because yesterday I stumbled upon a haunted house for sale.  Actually, not a haunted house; a haunted castle.  Better still, it's right here in the United States, obviating the need for my obtaining a resident visa from one of your usual castle-having nations.  (Although in all honesty, given the current administration, I've been considering emigrating to a small uncharted island off the coast of Mozambique anyhow, even though small uncharted islands rarely have castles, haunted or otherwise.)

This particular haunted castle is Beckett Castle, in Cape Elizabeth, Maine.  Cape Elizabeth is right on the Atlantic Ocean -- another appealing point -- and is an easy drive from Portland.  This is a definite advantage, because for much of Maine, the only thing you're in an easy drive from is a shitload of spruce trees.  So the site is pretty much ideal.

Beckett Castle was built in 1874 by the eponymous Sylvester Beckett, who was a lawyer, writer, and publisher.  It has 1,981 square feet of living space, which strikes me as a little small for a castle, but after all, Maine is not generally considered castle country, so I guess you take what you can get.  It has three bedrooms, three bathrooms, and -- best of all -- a three-story tower.  It's built of local gray fieldstone, but has been recently "extensively remodeled," so it doesn't feature the usual downside of castles, which is lack of indoor plumbing. 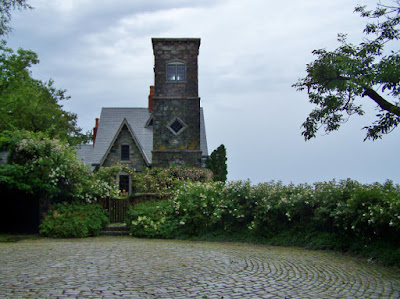 It also has a huge rose garden and a "carriage house" that would be perfect as an artist's studio, so Carol would be happy.

Of course, there's the "haunted" part.  Paul Seaburn, over at Mysterious Universe, says that the "primary ghost" is Sylvester Beckett himself, which brings up an interesting question; how do you get appointed "primary ghost?"  Does the class system transfer directly into the afterlife?  Because that hardly seems fair.  You spend your whole life working your ass off as a servant, then you die and become a ghost, and damned if you're not still scrubbing the floors in spirit form.  If that happened to me, I'd say, "fuck it," and leave.  I mean, what are they going to do?  Withhold my ghostly paycheck?  Write a bad letter of reference for the next place I'm planning to haunt?  They could get as mad at me as they want.  I mean they couldn't even kill me, because I'm already dead.

The previous owner, Nancy Harvey (who died in 2016; her family is handling the sale) was interviewed prior to her death and went on record as saying that she'd never had any paranormal experiences in the place, despite Sylvester's reputation for appearing as a "radiant blue orb" and pulling the sheets off you while you sleep.  Harvey, however, didn't attribute this lack of ghostly goings-on as evidence that the place wasn't haunted; she said that Sylvester didn't disturb her sleep because he was happy about the renovations she'd done.

I guess even when you're a ghost, you care that people are keeping your house in good shape.

Unfortunately, I don't think I'm going to put an offer on Beckett Castle, as attractive as it seems, for the very good reason that the asking price is $2.5 million.  I just don't have that kind of cash lying around.  Plus, I'm not known for my housekeeping skills.  Most of the time, my approach to housekeeping can be best summed up as "There appears to have been a struggle."  One friend said the interior of my house looks like "a museum maintained by toddlers."  So buying Beckett Castle seems to me to be asking for Sylvester to come back and rip the sheets off my bed at one AM and demand to know why I didn't do last night's dinner dishes.

It's a pity, because the place is beautiful, and it's a great location.  But I think for the foreseeable future, we're going to stay here in upstate New York.  If our current house is haunted, I've seen no evidence of it.  Or maybe the ghosts were people who, when they were alive, were also terrible housekeepers, and are happy the place is owned by kindred spirits (as it were).  That'd also explain it.