Relics of a lost age

If I can be allowed to geek out a little, today's post is about two new discoveries in the field of paleontology.

The mid-Permian period was (1) a challenging time to live, when the climate was rapidly warming and drying, and (2) at 270 million years before the present, was a really long time ago.  Not only was the climate getting dicey, the world was heading for catastrophe -- the lockup of the supercontinent Pangaea, as all the world's land masses fused into one and the rest of the Earth was covered by a giant ocean, is thought to have been the kickoff to the largest wipeout the Earth has ever seen -- the Permian-Triassic extinction.  Not only did the formation of the supercontinent (and superocean) 252 million years ago drastically change the climate, the event coincided with the formation of the Siberian Traps, when four million cubic kilometers of basaltic lava flowed out over what is now eastern Russia.  The resulting massive burning of organic matter spiked the carbon dioxide content of the atmosphere, simultaneously causing the oxygen content to crash and triggering a warm-up that resulted in average ocean surface temperatures of 40 C (104 F).

The result: 95% of the species on Earth became extinct.

Of course, one of the lineages that made it through the bottleneck was our own ancestors.  Back in the mid-Permian -- pre-mass-extinction -- there was a group of protomammals called Gorgonopsians, which included some seriously scary carnivores (one, Inostrancevia, had a 45-centimeter-long skull and saber teeth -- preceding the more famous "saber-toothed tiger" Smilodon by a good 260 million years).

Permian protomammal fossils are quite rare, however.  So it's pretty awesome that paleontologist Christian Kammerer, paleontology curator of the North Carolina Museum of Natural Sciences, discovered fossils of not one, but two new species of mid-Permian protomammals in a small museum in Russia.

Called Gorynychus matsyutinae and Nochnitsa geminidens, the two were drastically different in size.  Gorynychus was probably one of the apex predators of its time, with a 25-centimeter-long skull and big, nasty, pointy teeth.  Nochnitsa, also a predator, was weasel-sized.  The genera were both named after beasts from Russian mythology -- the three-headed dragon Zmey Gorynych and the malevolent, vampiric night spirit Nochnitsa. 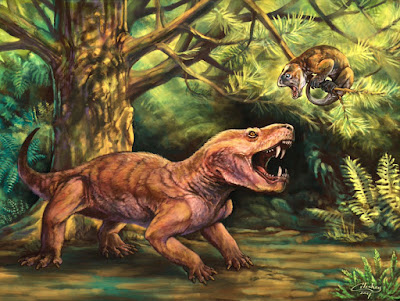 Artist's reconstruction of Gorynychus and Nochnitsa [by Matt Celeskey @clepsydrops, from the press release from the North Carolina Museum of Natural Sciences; used with permission]

These lineages both made it through the bottleneck, but not unscathed.  Their descendants, eighteen or so million years later, underwent some rapid evolution during the Permian-Triassic extinction, especially with respect to size.  "In the age before the dinosaurs, when protomammals were the dominant life on land, you had two different groups that switch off on which is the top predator," Kammerer said.  "You have wolf- to lion-sized saber tooth animals wiped out by a mass extinction, and [the Nochnitsa-like animals] take over.  But [Gorynychus-like animals] aren’t wiped out altogether in this extinction, and they take over and become a small insect eating predator, not large carnivores anymore."

Kammerer and his co-author (and co-discoverer of the fossils), Vladimir Matsyutin of the Vyatka Paleontological Museum of Kirov, Russia, were excited not only about having found fossils of two hitherto-unknown species, but about the potential for other discoveries tucked away in museums.  "I would guarantee you there are thousands of undescribed species in museum collections,” Kammerer said.  "Most new species are found in museum collections for the sole reason that there are literally millions of species on Earth today and many more in the fossil record.  When you’re going out and collecting specimens, you won’t know those things.  The people in the museum knew they were protomammals but they didn’t know they were new species."

So that's today's cool science story, about some of our (very) distant relatives.  I've always been fascinated with the early mammals -- for some reason, much more than the charismatic megafauna that were just getting their start at the same time (the dinosaurs, of course).  And the fact that these critters were out doing their thing as the Earth was heading toward the largest catastrophic extinction ever just adds a nice little frisson to the discovery.  You kind of want to warn them about what's coming, you know?

Oh, well, probably wouldn't have helped.  It's not like you can hide from four million cubic kilometers of lava.