After the last three days' depressing posts, I thought it was once again time to retreat to my happy place, which is: cool new scientific research.  So, for your reading entertainment, here are some early-summer shorts. 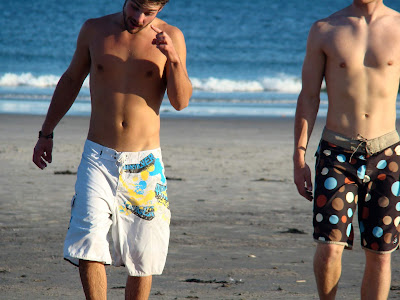 [Image licensed under the Creative Commons marcore! from Hong Kong, China, Board shorts 4, CC BY 2.0]

No, not those kind of shorts.  The scientific variety.

First, we have some research that appeared last week in the Journal of Applied Research in Memory and Cognition, done by Julia Soares and Benjamin Storm of the University of California.  In their paper, entitled, "Forget in a Flash: A Further Investigation of the Photo-Taking Impairment Effect," what Soares and Storm found that for reasons still unknown, taking a photo of something impairs your ability to remember it -- even if you know that you won't have access to the photo later.

The authors were interviewed by Alex Fradera for the Research Digest of the British Psychological Society, and there's a possible explanation for the phenomenon, although it's still speculative.  Fradera writes:


Soares and Storm have a speculative second interpretation.  They suggest that the effort involved in taking a photo – getting the framing right, ensuring the lens is in focus – leads to the sense that you’ve done a good job of encoding the object itself, even though you have been focusing more on peripheral features.  So you’re not mentally slacking-off because you think the camera has it covered – but because you think you already have.  It may be relevant that people who take photographs at events report afterwards feeling more immersed in the experience, which would tally more with this explanation than the disengagement-due-to-fiddling idea.  In any case this is further evidence that those of us who approach exciting life events through the lenses of our electronic devices may be distancing ourselves from fuller participation.

From the Department of Geophysics at the University of Texas comes a study of the most famous (although not, by a long shot, the largest) mass extinction event -- the Cretaceous-Tertiary Extinction of 65 million years ago, which took out the dinosaurs, with the exception of the ancestors of today's birds.  The accepted explanation of the event is a collision by a massive meteorite near what is now the Yucatán Peninsula, forming the Chicxulub Crater.

A long-unanswered question about mass extinctions such as this one is how fast life rebounded.  The problem is that the difference between a thousand, ten thousand, and a hundred thousand years in the geological record isn't that great, so the error rate for any estimates were bound to be high.  But now, geophysicists Chris Lowery, Gail Christeson, Sean Gulick, and Cornelia Rasmussen, working with Timothy Bralower, a micropaleontologist at Pennsylvania State University, have found evidence that narrows that window down -- and surprisingly, shows that life recovered pretty quickly.

The key was finding a sediment core that contained 76 centimeters of brown limestone that came from the years immediately following the impact.  It contained debris from the event, including crystals of "shocked quartz" (quartz crystals showing signs of sudden, extreme temperatures and pressures).  And what the researchers found was that a little as a few thousand years, the ecosystem was beginning to rebound.

"You can see layering in this core, while in others, they’re generally mixed, meaning that the record of fossils and materials is all churned up, and you can’t resolve tiny time intervals," Bralower said.  "We have a fossil record here where we’re able to resolve daily, weekly, monthly, yearly changes."

Speaking of catastrophes, a fascinating piece of research from Stanford University anthropologists Tian Chen Zeng, Alan Aw, and Marcus Feldman gives us a possible explanation for a peculiar calamity that the human race experienced only seven thousand years ago.  By analyzing the genetic diversity among human Y-chromosomal DNA (inherited only father-to-son) and comparing it to the diversity in mitochondrial DNA (inherited only mother-to-child), they found something decidedly odd; the data suggested a serious genetic bottleneck -- but one that affected only males.

The difference was huge.  Zeng et al. showed that the disparity would only make sense if there was a point about seven thousand years ago when there was one male with surviving descendants for every seventeen females.

Feldman writes, in a press release to EurekAlert!:

After the onset of farming and herding around 12,000 years ago, societies grew increasingly organized around extended kinship groups, many of them patrilineal clans - a cultural fact with potentially significant biological consequences. The key is how clan members are related to each other.  While women may have married into a clan, men in such clans are all related through male ancestors and therefore tend to have the same Y chromosomes.  From the point of view of those chromosomes at least, it's almost as if everyone in a clan has the same father.

That only applies within one clan, however, and there could still be considerable variation between clans.  To explain why even between-clan variation might have declined during the bottleneck, the researchers hypothesized that wars, if they repeatedly wiped out entire clans over time, would also wipe out a good many male lineages and their unique Y chromosomes in the process.

So as weird as it sounds, if you go back a few thousand years, we all have far fewer unique male ancestors than unique female ancestors.


Last, I would be remiss if I didn't make at least a brief mention of research that appeared in the Journal of Clinical Endocrinology and Metabolism last week.  Authored by Audrey J. Gaskins, Rajeshwari Sundaram, Germaine M. Buck Louis, and Jorge E. Chavarro, the paper was entitled "Seafood Intake, Sexual Activity, and Time to Pregnancy," and amongst its conclusion was that the quantity of seafood eaten correlates positively with the number of times per month people have sex.

The researchers speculate that the reason may be the higher quantity of long-chain omega-3 fatty acids, common in seafood, has an effect on the reproductive hormones, increasing sex drive.  It does, however, make me wonder how anyone thought of correlating these, but my puzzlement is probably indicative of why I never went into research.

In any case, I thought it was interesting.  And makes me glad I brought leftover scampi for lunch.  Hope springs eternal, you know?