A slice of pi

Note to my loyal readers: This will be my last post before a two-week break so I can go to my publisher's annual writers' retreat in the Ozarks.  Please keep sending links & ideas -- I'll be right back in the saddle when I return.  Look for the next Skeptophilia post on Monday, August 6!

Sometimes you have to admire the woo-woos' dogged determination to fashion the universe into their own bizarre version of reality.

There are a few people, however, who just aren't content if they're not actively beating the matter into submission.  Such a person is Marty Leeds, Wisconsin-born writer, mystic, philosopher, and the origin of dozens of highly entertaining YouTube videos.

Just yesterday, I was sent a link to one of Leeds' creations, entitled, "Number Magic: Gematria."  The link was accompanied by a message stating, and I quote: "Words cannot describe the level of derp in this video."  So of course I had to watch it.  And I wasn't disappointed.

Turns out he has an obsession with the number pi.  Okay, it's a pretty cool number,  being transcendental and all, but he thinks there's... more than that.  Way more, as it turns out. 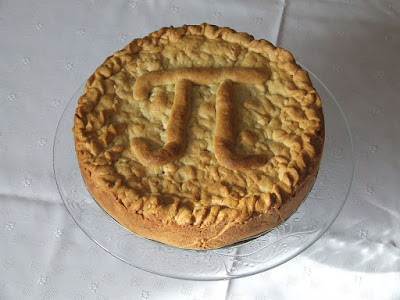 What you get when you divide the circumference of an apple by its diameter.  [Image licensed under the Creative Commons Matman from Lublin, Apple pie Pi Day 2011, CC BY-SA 3.0]

If you're unwilling to sacrifice an hour and a half of your precious time (and to be honest, I made it through about twenty minutes, and just skimmed the rest), and countless innocent cells in your prefrontal cortex that will die in agony, allow me to present to you the main points of Leeds' argument.
Well, I hope you've enjoyed our little ramble through woo-woo arithmetic. Me, I'm planning on watching some of Leeds' other videos when I have the time.  (Two especially fascinating-sounding ones are "Pizzagate, Symbolism, and Secret Societies" and "Flat Earth Implications, NASA Lies, and Gematria."  Of course he's a Flat Earther.  You're surprised by this?)  However, I think next time I won't launch into this without something to insulate my poor brain against further damage.  I'm thinking that a double scotch might do the trick.