There's been so much bad news lately that I've several times felt like I needed to avoid all forms of media not to go into a full-blown, crashing depression.

It's hard to escape the conclusion that we're in a downward spiral.  Our leadership is the most corrupt, dishonest, self-serving bunch of politicians that I can remember, and I'm 57 years old.  The driving force in our government at the moment is corporate interests über alles.  We're progressively alienating all of our allies, disregarding science, passing legislation that trashes the environment, and in general paying attention to nothing but short-term expediency and lining the pockets of the already-wealthy.

So today, I want to tell you about some good news.

Long-time readers of Skeptophilia might recall that over the last five years, I've become involved in a fight right here in my home county against storing liquified petroleum gas (LPG) in unstable salt caverns beneath Seneca Lake.  Salt cavern storage has been tried before, with disastrous consequences.  Explosions, collapses, and contamination of rivers and streams have been documented over and over, and here in New York, the county and state governments seemed bound and determined to ignore what the geologists were saying -- that the caverns underneath the lake were unstable on a huge scale, and that only fifty years ago there'd been a humongous ceiling collapse that, if the caverns had been filled with natural gas, would have caused a massive explosion, followed by the southern end of the lake becoming so saline that it would no longer be usable as a source of drinking and agricultural water.

We not only live in an area of great natural beauty, but the Seneca Lake wineries and farms are a huge money-maker for residents in the area.  Risking this for no good reason other than putting money in the pocket of Crestwood Midstream -- a Texas-based petroleum company -- makes no sense whatsoever.

So a lot of us began protesting.  At first, with letter-writing campaigns and often fiery debate in town, county, and state-level meetings.  Dr. Sandra Steingraber, a local resident and highly acclaimed ecologist, writer, and activist, became one of the most determined opponents of Crestwood's plan, and was tireless in her efforts to block the project.  The low-key methods had no effect, however, and so we were forced to kick it up a notch.  We organized blockades of Crestwood's Seneca Lake site -- resulting in hundreds of us being arrested, and a number were sent to jail.

I was one of the ones arrested -- although I was never jailed.  I had three court appearances, and the charges were eventually dropped. 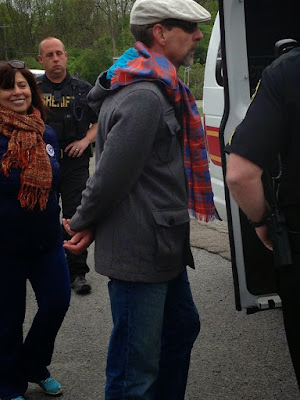 The protests and civil disobedience stretched out over years.  But eventually, people started to listen.

Basil Seggos, commissioner of the DEC, was unequivocal.  "The record is compelling that the permitting this proposed gas storage facility on the western side of Seneca Lake is inconsistent with the character of the local and regional Finger Lakes community," Seggos said, as part of his 29-page decision.

"This is truly a great day for our region,” said Yvonne Taylor, vice president of Gas Free Seneca, which formed seven years ago to combat the project.  "Don’t ever let anyone tell you that David can’t beat Goliath."

Look, I know we need energy, and that a switch to renewables can't happen overnight.  But continuing to support fossil fuels -- with its history of pollution and fostering climate change, not to mention spills, explosions, and fires -- is simply unconscionable.  We should be finding ways to cut back on fossil fuel use by becoming more efficient and looking for clean energy sources -- not foisting expanded storage on a community whose residents either didn't want the project or didn't understand its dangers.

So this is one win for the little guy, and a ray of hope in what has been a very, very dark time in our nation.  At least in our neighborhood, scientific research and plain good sense triumphed over corporate interests.

Which should be encouraging to others fighting in the hundreds of other David-versus-Goliath scenarios currently being played out.  You can win.  But only if you're determined to put yourself on the front lines -- and never, ever give up.