One question that has been raised over and over -- both by me and to me -- is, "what would it take for the diehard core of Donald Trump's base to recognize they'd been had?"

I mean, it's hard to fathom how what's already happened isn't enough.  His disastrous, ill-thought-out punitive tariffs have damaged long-standing trade partnerships and driven exports down and prices up, hurting farming and manufacturing.  Much of what comes out of his mouth is either a calculated lie or else made up on the spot; keeping track of his verifiable falsehoods is very nearly a full-time job.  And then we had his horrifying performance in Helsinki this week, wherein he did everything but kiss Vladimir Putin on the mouth -- along with making statements that, in my opinion, should have resulted in his being arrested for treason the moment he set foot on American soil.

But his base still loves him, and even more bizarrely, the Republicans in Congress do, too.  The criticism the GOP powers-that-be gave him after the Helsinki Summit can be summed up as, "Gee whiz, we wish you hadn't done that.  Oh well."  Worse yet, Senator Bob Corker, head of the Senate Foreign Relations Committee, blocked a measure that would have allowed subpoena of the translator's notes from Trump's closed-door meeting with Putin -- a meeting at which, in Trump's own words, "many agreements were made," even though nobody has the slightest clue what those agreements are. 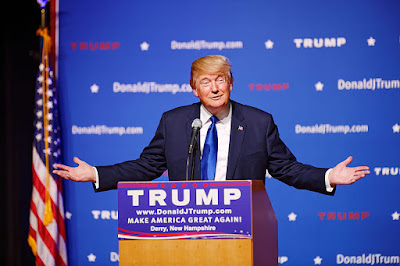 Oh, and how about the fact that the GOP shot down a demand by Democrats that Congress be allowed to question Maria Butina, the accused Russian spy who allegedly funneled millions of dollars from Russia, through the NRA, and into the Trump campaign.  Devin Nunes, who heads the House Intelligence Committee, wouldn't comment, but the only spin I can put on it is that they were afraid of what Butina would say.  Representative Mike Quigley of Illinois concurs:


The fact that we were shut down, they refused to allow subpoenas to go forward involving the gun rights group she formed in Russia and its connection to the NRA — the fact that there were so many other documents they refused subpoena.  They refused to subpoena anyone and make them answer questions.  They went along with the White House insisting no one has to answer our questions.  That sounds like they wanted to work with the White House to protect it politically and legally not get to the truth.

The GOP leaders don't spin it that way, of course.  They simply say, "We trust President Trump."

Myself, I trust President Trump so little that if he said the front lawn was green, I'd want to go outside to verify it myself.

And of course, Trump himself blames his shameful kowtowing to Putin on... surprise!... the media.  Two days ago, he tweeted, "The Summit with Russia was a great success, except with the real enemy of the people, the Fake News Media.  I look forward to our second meeting so that we can start implementing some of the many things discussed."  Because, apparently, the "Fake News Media" is responsible for Trump's siding with Russia, against American intelligence agencies, in full view on television.

But no group of Trump supporters baffles me more than the evangelicals.  I know I've said it before, but I simply cannot fathom how a group priding themselves on being the Pillars of Morality in America can continue to support a greedy, grasping, lying, narcissistic, ignorant bigot.  "God can work with a broken tool," I had one person tell me.  The fact is, the evangelicals as a whole still believe in Trump without question.  And that belief isn't just strong, it's got the zeal and fervor of a cult.  Consider what evangelical television host Rick Wiles said yesterday on his show:

I'd laugh if it weren't for the fact that a significant number of Americans believe he's right.

I am seriously afraid of where this country is headed.  Wiles may be right about the armed mobs, but it's not the leftists I'm worried about.  It's the right-wing fanatics -- that 30% who still, after all this, think that Donald Trump is the best man to lead our nation.  Because when this house of cards falls, it's going to fall hard.  The effective half-life of tyranny is always short, however horrible it is for the people who have to live through it.  But there is no way that Mitch McConnell, Paul Ryan, Dana Rohrabacher, and the rest of the people running around propping up the Trump edifice with sticks can succeed for long.

I just hope the damage to our nation isn't irreparable by the time it happens.