A few months ago, I wrote a post about a guy who claimed that all you need to do to purge your home of "negative energies" (whatever those are) is to place a glass of vinegar and salt on your windowsill.  Vinegar, which clearly has magical properties, will then de-negativize you and your house.

The whole thing made me wonder why you couldn't achieve the same effect with, say, a jar of pickles.

Anyhow, a couple of days ago, a good friend and loyal reader of Skeptophilia sent me a link with the note, "Hey!  Here's something else you can do with vinegar!  I thought you'd want to know."

So I clicked the link, and was brought to the site Delishist, specifically to an article called "Soak Your Feet in Vinegar Once a Week, and You Will See How All of Your Diseases Disappear."

I am not, for the record, making the name of this article up.

My first thought, of course, was, "All your diseases?  Like, if you have a brain tumor and Parkinson's disease and narcolepsy simultaneously, you can get rid of all of them by soaking your feet in vinegar?  That can't possibly be what they mean."

But yes, that is in fact what they mean. 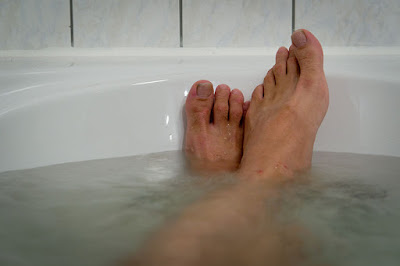 It will at this point be unsurprising to any of you that the whole thing revolves around "toxins."  What these specific toxins are, we're never told.  Maybe it's elemental mercury.  Maybe it's DDT.  Maybe it's battery acid.  Maybe it's all three at once.  In any case, we're led to believe that whatever they are, they're bad, and not only can't your body get rid of them by itself, there's no way to take them out except through your feet.

Which seems to me a little odd.  Why the feet?  Could I, if I wanted to, soak my ass in vinegar?  (Let me state for the record that I don't want to.  But my question stands.)  I mean, the human ass is much more directly connected to the process of getting rid of stuff we don't want in our body, although to be fair, the gluteus maximus muscle that makes up most of it has very little to do with it.

So I'm baffled as to why the feet are what we should be soaking.  Maybe it's because the feet are generally below the head, and toxins are heavy, or something.

In any case, here's how the authors explains the process:


You can also use ionic foot bath to detoxify your body from toxins.  This bath is based on electrolysis, which is a method that uses electrical current to make a chemical reaction.  You should use warm water to open your pores and salt is used as an anti-inflammatory astringent. Ions are absorbed through the feet and your body is getting a detox.  If the salt water becomes dark, that means you are eliminating toxins from your body.

Okay, so the basic principle is ions = good, and toxins = bad.  Got it.

But what about ions that are toxic?  Like the cyanide ion, for example?  I don't care what Delishist says, I'm not soaking my feet in cyanide.

And they're right about the definition of electrolysis, but the problem is, combining it with a vinegar foot bath would be a seriously bad idea.  Another thing I'm not going to do is stand in a tub of vinegar and then run an electric current through it and/or me.  Yes, it'd generate some serious ionage.  The downside, however, is called "electrocution."

The website also suggests soaking in a bath to which you've added ginger and hydrogen peroxide.  This is yet another thing I'm not going to do.  First of all, wouldn't that bleach your pubic hair?  I mean, it's fine if that's the look you're after, but I thought I'd mention it.  Another, and more serious, problem is that hydrogen peroxide works as an antiseptic because it kills nearly everything it touches, and given long enough, that would include your skin.  I know a guy who used peroxide on a cut, but it stayed open, and he decided it was infected, so he kept applying more and more peroxide.  Within a week he'd turned a minor cut into a gaping wound -- not from infection, but because he was putting something on it that was killing his own tissue.  So applying peroxide to my entire body, including my sensitive bits, sounds to me like a seriously bad idea.

So thanks anyhow, but I'll pass on soaking my feet in vinegar.  I find that washing them periodically keeps them relatively clean, and as for "getting rid of toxins," my liver and kidneys are perfectly capable of that.  My advice is to go back to using vinegar for making pickles, because a lot of the other stuff it's supposed to be good for is USDA Grade-A horseshit.