Being a blogger means I get some interesting emails.

A lot of them, as you undoubtedly know if you read Skeptophilia frequently, are recommendations for future posts.  I appreciate these tremendously, even the ones of the "I think you're wrong and here's a link proving it" type.  Hey, if I wasn't willing to reconsider topics, and admit when I was wrong, I'd be a poor excuse for a skeptic.  So don't stop sending suggestions, and don't stop reading carefully so someone's keeping me honest.

Then there are the emails telling me what readers think of me.  Laudatory ones are lovely, of course, but I find the hate mail rather interesting.  Most of it seems to be generated because of my general disdain for pseudoscience -- by which I mean practices like astrology, homeopathy, auras, and (most) psychic/paranormal investigation.  (I emphasize the word most because there are groups that approach it the right way.  A good example is the UK-based Society for Psychical Research, which looks at such claims with a skeptical eye, and is perfectly willing to call out hoaxers when it's merited.)

Then there are the religious ones.  I got an interesting one in this category day before yesterday, and that's what spurred me to write this post.  I call it "interesting" not because I think the writer was right -- about pretty much anything (s)he said -- but because it brings up a few stereotypes that are all too common.  So here's the email in its entirety, with some interjected responses from me.

I'm going to identify myself right away as a Christian.  I always have been and I always will be.  I know you'd like to talk me out of it, but it wouldn't succeed.

Well, you started off on the wrong foot.  I have no interest whatsoever in "talking you out of" Christianity or any other viewpoint you might have on which we disagree.  I'm a firm believer in something my mom taught me when I was little -- "my rights end where your nose begins."  So you can believe in God, you can believe in Allah, you can believe in Zeus.  Hell, you can believe that the universe is controlled by a Giant Green Bunny from the Andromeda Galaxy if you want.

I do, however, object when religion (or any other framework for belief) starts impinging on the rights of non-adherents.  An example is the virulently anti-LGBTQ stance of a lot of evangelicals.  You have every right to refrain from same-sex encounters yourself if you think they're sinful or repugnant.  What I won't stand by silently for is when you say, "I belong to the Church of XYZ, so you should be punished for being gay," or "I have a right to discriminate against you because my religion says I should."

Beyond that, I'm not trying to talk anyone out of, or into, anything.  I state my opinions -- rather strongly at times, I'll admit -- but I have the same right to do that as you do, and I have no more right to compel you than you do me.


I don't know why you feel like you have to trumpet your hate for Christians the way you do.  It isn't right.

Asking me "why I hate Christians" is a little like asking "when did you stop beating your wife?"  In point of fact, I don't hate Christians.  I may disagree with them, but that's not the same thing.  And I'm happy to say that I am friends with people of a great many religions, and every gradation of faith, questioning, doubt, and disbelief, and honestly, we all get along pretty well. 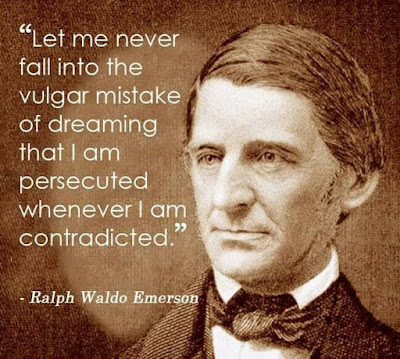 Because I went to high school in rural southern Louisiana, you might imagine that I know a good many devout people -- and you'd be right.  Because of the wonders of Facebook, a lot of my classmates have kept in touch, and (surprise!) I can't remember any of us saying to another, "I don't like you any more because your religious views are different from mine."  Mostly what we do is argue about stuff like whose grandma had the best gumbo recipe.


And what made you hate God?  God shows nothing but love for his people, he wants the best for all of us, and you return nothing but spite.  Try looking at His creations without the fire in your eyes and you might be surprised.

Once again, I don't hate God, I just don't think he exists.  Which is hardly the same thing.  At the same point, being a skeptic (as I mentioned before), I'm perfectly open to being convinced, if anyone has credible evidence that I'm wrong.  (You may recall Bill Nye's comment during the infamous Bill Nye/Ken Ham evolution/creation debate that Bill was asked what would it take to convince him he was wrong, and he said, "One piece of evidence that couldn't be explained another way."  That's how I feel about pretty much everything.)

So if you have some evidence, let's hear it.  I promise I won't burn you up with the fire in my eyes.


The worst part is you're a teacher.  So you're influencing a whole generation of children who look up to you, inducing them to abandon God and putting them in danger of hell.  I can't think of anything worse.

This part made me think of how the author of this email must picture my classes.  What, do you believe that I run into my classroom every day, yelling maniacally, "THERE IS NO GOD!  WORSHIP SATAN!  BOW DOWN TO EVIL!  HA HA!" or something?  Let me tell you, with all of the actual science I have to cover, I simply don't have time to indoctrinate my students in Satan worship.

In fact, every once in a while -- this comes up most often in my Critical Thinking classes, although the question is sometimes raised when we're studying evolution in my biology classes -- some student will ask me if I'm religious.  My usual response is, "My own religious beliefs aren't relevant here."  I mean, given that my background is in evolutionary genetics, it's a pretty shrewd guess that I'm not a fundamentalist.  But other than that, I suspect the majority of my students don't have a clue about my own beliefs or lack thereof.

And that's exactly how it should be.


It's not too late for you.  You can still dedicate your life to Jesus.  The lost lamb can be found.  But not if you persist in your hateful, God-denying ways.  I'm asking you to repent and beg forgiveness, for your own sake.

I will be praying for you daily that you will come back to your Creator rather than having to face him at the End of Days and be cast away in despair.

Well, I suppose that's all nice enough.  I'm not a big believer in prayer, myself, but I'll never turn away well-wishes in whatever form they may take.  And it's nice to know you don't want me to burn for eternity.  (And I have actually gotten emails of the "When you die I'm going to laugh because I'll know you're being tortured in hell" variety.  But they're not very common, which is rather heartening.)

The email wasn't signed.  It just sort of ended there, without a "have a nice day" or anything.  Although I can see that given what went before, that'd be a little ironic.

Anyhow, I suppose it could be worse.  At least there were no death threats.  And like I said, the writer seemed to be coming from a generally compassionate point of view, even if his/her interpretation of my beliefs was a few degrees off of due north.  So keep those cards and letters comin', although I'd prefer it if the "burn in hell unbeliever" and "I'm going to track you down and kill you" people would find another hobby.

Oh, and it was my grandma.  My grandma clearly had the best gumbo recipe.  Thanks for asking.