Two months ago my younger son moved to Houston, Texas for a new job, and although he's 27, this of course elicited all the usual parental worries from Carol and me.  But we submerged our nervousness, not to mention our awareness that this means we'll only see him once or twice a year at best, and helped him pack up and get on his way.

He spent his last night in New York at our house, and left on a sunny Sunday morning with hugs and good lucks and farewells.  Five hours later I got a telephone call from him that is something no parent would want to hear.

After I got past the say-whats and what-the-fucks, and returned my heart rate to as near normal as I could manage, I asked him for details.  The bare facts are as follows.

He was heading down I-90 at the obligatory seventy miles per hour, out in the hinterlands of Ohio, when there was a loud bang and his truck skidded to the right.  What apparently had happened is that three weeks earlier, when he was having the tires replaced, the mechanic had overtightened one of the bolts and cracked it.  At some point, the pressure made it give way, and the torque sheared off all four of the other bolts.

As luck would have it -- and believe me, there's a lot to credit luck with in this story -- the wheel went under his truck and got lodged, so he was skidding with the wheel and tire as padding.  He maneuvered his truck to the shoulder, miraculously without hitting anything or anyone, and without putting a scratch on his truck -- or himself.  But there he was, alongside the freeway ten miles from Ashtabula, wondering what the hell he was going to do.

The story ends happily enough; I called a tow truck and had him towed to a place where they botched a second repair job, but he figured that out before he'd gotten very far (believe me, now he's aware of every stray shudder or wobble), and we had him towed a second time to the Mazda dealership in Erie, Pennsylvania, where they completed the repair the right way.  The remainder of his journey to Houston was uneventful. 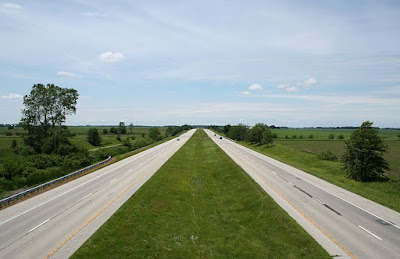 [Image is licensed under the Creative Commons Dual Freq, I-72 North of Seymour Illinois, CC BY-SA 3.0]

This all comes up because there's been a new study from University College, London, about our reactions to bad news, and how those reactions change when we're under stress.  The research team was made up of experimental psychologists Neil Garrett, Ana María González-Garzón, Lucy Foulkes, Liat Levita, and Tali Sharot (regular readers of Skeptophilia may recognize Sharot's name; she was part of a team that investigated why people find lying progressively less shame-inducing the more we do it, a study that I wrote about last year).


Humans are better at integrating desirable information into their beliefs than undesirable.  This asymmetry poses an evolutionary puzzle, as it can lead to an underestimation of risk and thus failure to take precautionary action.  Here, we suggest a mechanism that can speak to this conundrum.  In particular, we show that the bias vanishes in response to perceived threat in the environment.  We report that an improvement in participants' tendency to incorporate bad news into their beliefs is associated with physiological arousal in response to threat indexed by galvanic skin response and self-reported anxiety.  This pattern of results was observed in a controlled laboratory setting (Experiment I), where perceived threat was manipulated, and in firefighters on duty (Experiment II), where it naturally varied.  Such flexibility in how individuals integrate information may enhance the likelihood of responding to warnings with caution in environments rife with threat, while maintaining a positivity bias otherwise, a strategy that can increase well-being.

In practice what they did was to induce anxiety in one group of their test subjects by telling them that as part of the experiment, they were going to have to give a public speech to a room full of listeners, and then asked them to estimate their risk of falling victim to a variety of dangers -- automobile accident, heart attack, homicide, and so on.  A second group (as the paragraph above explains) was simply exposed to anxiety-inducing situations naturally because of their job as firefighters, and then given the same questions.  Each of those two groups were again split into two groups; one was given bad news (that the chance of their experiencing the negative events was higher than they thought), and the other good news (that the chance was lower than they thought).

The volunteers were then asked to re-estimate their odds of each of the occurrences.

And what they found was that the subjects who had experienced anxiety had no Pollyanna bias -- they were much more realistic about estimating their odds, and revised their estimates either upward or downward (depending on which response they'd been given).

More interesting were the people who were in a control group, and had not experienced anxiety.  The ones who were given good news readily revised their estimates of bad outcomes downward, but the ones given bad news barely budged.  It's as if they thought, "Hey, I'm feeling pretty good, I can't believe I was really that far off in estimating my risk."

My question is whether this might be the origin of anxiety disorders, which are a little hard to explain evolutionarily otherwise.  They're terribly common, and can be debilitating.  Could this be some kind of evolutionary misfire -- that in the risk-filled environments our ancestors inhabited, keeping some background level of anxiety made us more realistic about our likelihood of harm?  And now that the world is a far safer place for many of us, that anxiety loses its benefit, and spirals out of control?

All of that is just speculation, of course.  But as far as what happened to my son, you'd be correct in surmising that it was not easy for me to hear.  My anxiety blew a hole through the roof, even though (1) he was fine, (2) his truck was fine, and (3) once we got him towed and the truck repaired, everything was likely to be fine.

I swear, I spent the next three days shaking.

In any case, the research by Garrett et al. gives us an interesting window into how induced anxiety alters our ability to modify our worldviews.  Myself, I'm just glad my son is settled in Houston and loves his new job.  It's not like this means I won't be anxious any more, but having one less thing to fret about is definitely a good thing.