Filling in the missing link

One of the chief values of science lies in its predictive power.

Once a theory has developed that accounts for all the known evidence, it then gives scientists new directions to pursue.  A classic example of this is Wolfgang Pauli's prediction in 1931 that there was a small, fast-moving particle that accounted for "lost" energy and momentum in beta decay (an example of which is the decay of carbon-14 into nitrogen-14).  Back then, they didn't have the technology to find it.  It took 28 years before Clyde Cowan and Fred Reines created a device that was able to detect it, and found a particle that had exactly the characteristics Pauli had predicted almost three decades earlier.  They named it the neutrino.

When this kind of thing happens, it's a real vindication of the theory itself.  Of course, sometimes it goes the other way -- there'll be a discovery that contradicts some part of the theory.  This forces revision of the theory to account for the new information.  Thus science's other amazing strength: its ability to self-correct.  As physicist John Baez put it, "When you do theoretical physics, sometimes you feel the high of discovering hidden truths about the physical universe.  Sometimes you feel the agony of suspecting that those "hidden truths" were probably just a bunch of baloney... or, realizing that you may never know.  Ultimately nature has the last word."

We had a nice example of that just this past week, not in physics but in evolutionary biology, with the discovery of two new species of dinosaurs at digs in Mongolia and China.  The species, named Bannykus and Xiyunykus, connected up two groups of dinosaurs in the Alvarezsauridae, which had tube-like snouts with tiny teeth, compact hands with narrow fingers and sharp claws, and (from the site of muscle attachment points on the skeleton) apparently had powerful pectoral muscles.  (You might guess, correctly, that they're thought to be allied to the earliest birds.) 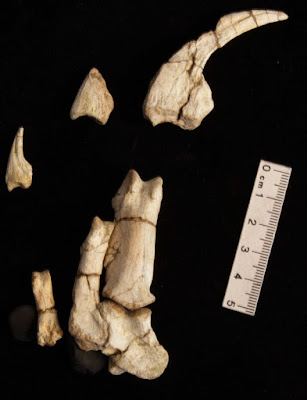 The problem was, there were alvarezsaurids from the late Jurassic Period, 150 million years ago, and some from the late Cretaceous, 70 million years ago -- and nothing in between.  That's a pretty sizable gap.  These "missing link" situations are common enough.  Unsurprising, given how unlikely it is for a fossil to survive intact for hundreds of millions of years, not even considering how tricky fossil formation is in the first place.  The truth is that only a minuscule fraction of the species that have existed left fossils -- the lion's share of the biodiversity Earth has had is unknown and probably unknowable.

It must be said at this juncture that "missing links" do not cast evolution into doubt.  To quote Carl Sagan, "Absence of evidence is not evidence of absence."  But because paleontology, like any good science, develops theories with predictive value, you can make some guesses about what should be there in those gaps.

And last week, we had another example of evolutionary biology and paleontology making a prediction that was spot-on.  "When we see a transition like that in the fossil record, we always want to know how it happened," said Corwin Sullivan in an interview with CBC.   Sullivan, a professor of paleontology at the University of Alberta, co-authored the paper, titled "Two Early Cretaceous Fossils Document Transitional Stages in Alvarezsaurian Dinosaur Evolution," which appeared in the journal Current Biology.  "[T]hese animals are, in a sense, missing links," Sullivan said.  "The teeth are quite a bit smaller — and in particular in the alvarezsaurids of the late Cretaceous, which are usually interpreted as specialized for insect eating, the teeth get very small, they lose their serrations on a very fine scale...  It's probably a question of exploiting a food resource that was available.  They would have been competing with other theropods and other kinds of predators."

Which is pretty cool.  It's always nice when the scientists say, "Hey, based on what we know, this must exist," and presto, someone finds exactly what they predicted.  Maybe the specifics in this case would only be of interest to serious dinosaur nerds, but the bigger picture -- that science can allow us not only to analyze what we have hard evidence of, but to infer detailed information about the missing pieces when we don't -- is pretty inspiring.

Posted by Gordon Bonnet at 4:53 AM