I vividly recall my first visit to the American Museum of Natural History in Washington, DC, perhaps fifteen years ago.  Having a fascination for evolutionary biology and paleontology, I was thrilled to take a walk down the hallway with exhibits of each biological taxon, in phylogenetic order -- put simply, all the groups of living things in the order they come on the family tree of life.

So I'm walking up the hall, and things are progressing the way I'd expect -- bacteria to protozoans to plants to primitive animals, and within Kingdom Animalia, jellyfish to flatworms to roundworms to more complex invertebrates, and then on to fish, amphibians, reptiles, birds, and mammals.

But that wasn't the end of the hall.  The usual approach to the "Great Tree of Life" -- with, of course, mammals at the top of the heap and humans at the top of the mammals, as befits the pinnacle of evolution -- wasn't applied here.  If you progress past mammals, you're into Phylum Arthropoda, those animals with jointed legs and an exoskeleton, which include arachnids, crustaceans, centipedes, millipedes, and the most successful creatures on Earth...

Being that it's the end of summer in upstate New York, I can verify that insects are highly successful life forms, given that there are millions of mosquitoes in my back yard alone, every single one of which divebombs my wife whenever she goes outside.  Something about Carol just attracts biting insects.  In fact, she claims that I bring her along to tropical destinations just to draw the mosquitoes away from me.

Which is not true.  Honestly.

In all seriousness, there is incredible diversity amongst insects, and many taxonomists believe that the number of insect species outnumbers all other kinds of animals put together.  Just beetles by themselves -- Order Coleoptera -- represents over 400,000 species, or about 25% of the total animal biodiversity on Earth.

This is the origin of the famous story about biologist J. B. S. Haldane, who was not only a vocal proponent of evolution but was an outspoken atheist.  Haldane frequently had hecklers show up at his talks, and one such asked him at the end, "So, Professor Haldane, what has your study of biology told you about the nature of God?"

Without missing a beat, Haldane replied, "All I can say is that he must have an inordinate fondness for beetles." 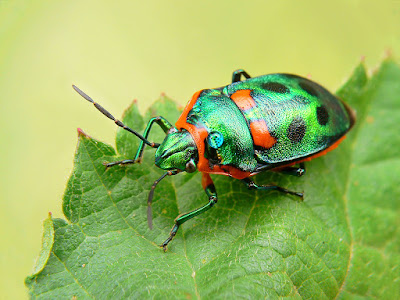 It's curious that such a diverse and ubiquitous group still has a great many questions unresolved about its origins.  It's known that the big jump in insect diversity came after the Permian-Triassic Extinction of 252 million years ago, the "Great Dying" that wiped out (by some estimates) 95% of life on Earth.  There's a common pattern that a sudden burst of species formation always follows a mass extinction, but in this case, because of a poor fossil record following the event, it's been hard to connect later biodiversity to speciation amongst the survivors.

We just got a huge boost in what we know about insect evolution because of the discovery of a fossil deposit in China dating from 237 million years ago, or only ("only!") fifteen million years after the extinction itself.  The site had eight hundred fossils representing 28 different insect families that had survived the bottleneck, including the ancestors of modern beetles, flies, and cockroaches.

The study, done jointly by Zheng Daran and Wang Bo of the State Key Laboratory of Paleobiology and Stratigraphy in Nanjing, China and Chang Su-Chin of the University of Hong Kong, is only a preliminary analysis of the fossils at the site, and has already helped to connect the dots between pre-Permian-Triassic insects and more modern ones.  As Elizabeth Pennisi, senior correspondent for Science magazine, writes:


The sites underscore that this burst of evolution took place much earlier than researchers had thought, particularly for water-loving insects.  Among the remains are fossil dragonflies, caddisflies, water boatmen, and aquatic beetles.  Until now, paleontologists had thought such aquatic insects didn’t diversify until 130 million years ago.  These insects—which include both predators and plant eaters—helped make freshwater communities more complex and more productive... moving them toward the ecosystems we see today.

It's always fascinating when we add something to our knowledge of past life, and even more impressive when it's about one of the most diverse groups that has ever existed.  Seeing how life rebounded after the Permian-Triassic Extinction should also give us hope -- that even after a cataclysm, the survivors can still come back and rebuild Earth's biodiversity.

Or, as Ian Malcolm put it in Jurassic Park, "Life finds a way."