The Great Filter and the three f's

In yesterday's post, we looked at how the Drake Equation predicts the number of intelligent civilizations out there in the galaxy, and that more than one of the variables has been revised upward in the last few years because of recent research in astronomy.  This suggests that life is probably super-common in the universe -- and intelligent life undoubtedly is out there, as well.

But we ended with a puzzle.  Physicist Enrico Fermi famously responded to Frank Drake with four words: "Then where is everybody?"  This was true back when it was said (1961) and is even more true now; in the intervening 57 years, we've done huge amounts of surveying of the sky, looking for any sign of an extraterrestrial intelligence, and found... nothing.

Now, to be fair, "huge amounts of surveying" still covers a minuscule fraction of the stars out there.  All that would have to happen is the radio signal saying, "Hi, y'all, here we are!" hitting Earth while our radio telescopes were aimed at a different star, or tuned to a different frequency, and we could well miss it. 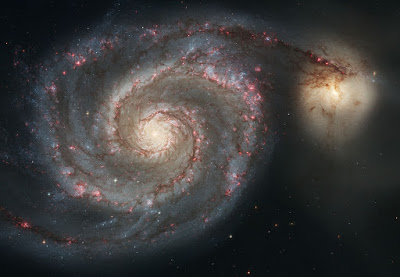 But there's a more sinister possibility, and that possibility goes by the nickname of "The Great Filter."

I looked at this concept in a post a while back, especially apropos of the variable "L" in the Drake Equation -- once a planet hosts intelligent life, how long does it last?  If we were to time-travel two thousand years into the future, would there still be a human civilization, or are we doomed to destroy ourselves, either by our own fondness for weaponry capable of killing large numbers of people at once, or because our rampant population growth exceeded the planet's carrying capacity, and we experienced what the ecologists somewhat euphemistically call "overshoot-and-rebound?"

But today I want to look at the Great Filter in a larger perspective.  Given that most astronomers think that the Drake Equation leads to the conclusion that life, and even intelligent life, is common out there, Fermi's quip is well taken.  And the answers to that question can be sorted into three basic categories, which have been nicknamed the "three f's":
Could we be the first planet in our region of the galaxy to harbor intelligent life?  It's certainly possible, especially given the time gap between our developing life (four-odd-billion years ago) and our developing the technology not only to send, but to detect, signals from other planets (about fifty years ago).  Consider, for example, that if there was a civilization on Alpha Centauri at the technological stage we had two hundred years ago, they would have a thriving society made up of individuals that are highly intelligent, but to us here on Earth, they would be completely silent (and also wouldn't know it if we were talking to them).

However, considering the number of stars with planets, even in our region of the Milky Way, I think that's unlikely.  Even if we were all on a similar time table -- a contention that is not supported by what we know of stellar evolution -- it's nearly certain that there'd be someone out there at, or ahead of, our level of technology.  Add to that the fact that there are a lot of planet-hosting stars out there that are much older than the Sun, and I think option #1 is really not that likely.

Might we just be fortunate?  There are a number of hurdles we had to overcome to get where we are, none of which were at all sure bets.  The development of complex multicellular life, the evolution of symbiosis between our cells and what would eventually become our mitochondria (allowing us not only to avoid the toxic reactiveness of atmospheric oxygen, but to hitch that to our energy production systems, an innovation that improved our energy efficiency by a factor of 18).  None of those are at all guaranteed, and although it's conceivable to have intelligent life that lacks those characteristics, it's kind of hard to imagine how it would advance this much.

Then there's the evolution of sexual reproduction, which is critical not only because it's fun, but because it allows recombination of our genetic material each generation.  This allows us to avoid the dual problems of genetically-identical individuals being susceptible to the same pathogens, and also Muller's Ratchet (a problem faced by asexual species that is best understood as a genetic game of Telephone -- at each replication, mutations build up and eventually turn the DNA into nonsense).

But no one knows how likely the evolution of sexual reproduction is -- nor, honestly, if it's really as critical as I've suggested.

The last possibility, though -- "we're fucked" -- is the most alarming.  This postulates that the Great Filter lies ahead of us.  The reasons are varied, and all rather depressing.  It could be the "L" in the Drake Equation is a small number -- on the order of decades -- because we'll destroy ourselves somehow.  It could be that there are inevitable cosmic catastrophes that eventually wipe out the life on a planet, things like Wolf-Rayet stars and gamma-ray bursters, either of which would be seriously bad news if one went boom near the Solar System.

Then there's Elon Musk's worry, that intelligent civilizations eventually develop artificial intelligence, which backfires spectacularly.  In 2017 he urged a halt, or at least a slowdown, in AI research, because there's no reason to think sentient AI would consider us all that valuable.  "With artificial intelligence," Musk said, "we are summoning the demon.  You know all those stories where there’s the guy with the pentagram and the holy water and he’s like, yeah, he’s sure he can control the demon?  Doesn’t work out."

But by far the most sinister idea is that we're doomed because eventually, a civilization reaches the point where they're able to send out radio signals.  We've been doing this ever since radio and television were invented, so there's an expanding bubble of our transmissions zooming out into the galaxy at the speed of light.  And the idea here is that we'll eventually attract the attention of a considerably more powerful civilization, which will respond by stomping on us.  Stephen Hawking actually thought this was fairly likely -- back in 2015, he said, "We don't know much about aliens, but we know about humans.  If you look at history, contact between humans and less intelligent organisms have often been disastrous from their point of view, and encounters between civilizations with advanced versus primitive technologies have gone badly for the less advanced.  A civilization reading one of our messages could be billions of years ahead of us.  If so, they will be vastly more powerful, and may not see us as any more valuable than we see bacteria."

Which, considering that the first traces the aliens will see of us are Leave it to Beaver and The Andy Griffith Show, is an understandable reaction.

So there you have it.  If we did contact another civilization, it would be good news in one sense -- the Great Filter hasn't wiped everyone out but us -- but could be a seriously bad one in another respect.  I guess stuff like this is always a mixed bag.

Me, I still would love to live long enough to see it happen.  If an alien spaceship landed in my back yard, man, I would be thrilled.  It'd suck if it turned out to be an invasion by Daleks or Cybermen or whatnot, but man, at least for the first three minutes, it would be a hell of a rush.